The iconic castle received its final embellishment in celebration of the milestone: a new crest with a golden “50” in the center, on top of an iridescent (or “EARidescent,” in Disney’s words) background.

The celebration of the 50th begins Oct. 1. It will last 18 months and has officially been called the “World’s Most Magical Celebration.” 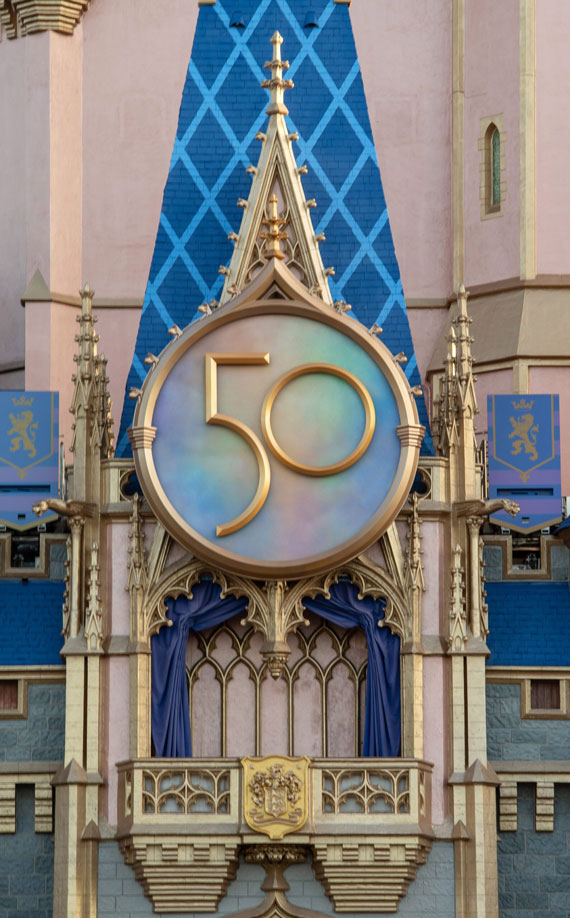 Disney has made a number of announcements in celebration of the 50th:

• Cinderella Castle has a number of golden embellishments and bunting in addition to the new crest.

• The castle and the other theme parks’ icons — the Hollywood Tower Hotel, Spaceship Earth and the Tree of Life — will become “Beacons of Magic” with a special, “EARidescent” glow in the evening.

• Characters will have new looks with iridescent costumes and pops of gold.

• Guests staying at Disney hotels will be able to enter theme parks early.

• Remy’s Ratatouille Adventure, a new attraction in the France pavilion at Epcot, will open Oct. 1, as will a new table and quick-service restaurant, La Creperie de Paris. Both are located in a new area of the pavilion.

• A new nighttime spectacular, “Disney Enchantment,” will debut in the Magic Kingdom on Oct. 1.

• “Harmonious,” the much-awaited nighttime spectacular in Epcot, will also debut Oct. 1. The main showpieces of Harmonious — a large ring and four platforms surrounding it, which will eventually be fountains during the day — have been visible on the World Showcase Lagoon for months.

• A daytime show, “Disney Kite Tails,” will debut in Animal Kingdom on Oct. 1, featuring kites on land and over the water. The show will be held at the Discovery River Amphitheater, the former home to the defunct show “Rivers of Light.”

• Fifty golden sculptures of Disney characters with interactive elements will be placed throughout the theme parks.

• At Epcot, the International Food and Wine Festival is currently ongoing. While a number of Global Marketplaces — where guests can purchase food and beverages from around the world — are currently open, still others are planned to open Oct. 1 for the 50th.

• New “Disney touches” are coming to Orlando International Airport to greet guests upon deplaning, ranging from an art installation to projections and photo opportunities.