Home » Destinations » Air travel: A summer of chaos in Europe and America 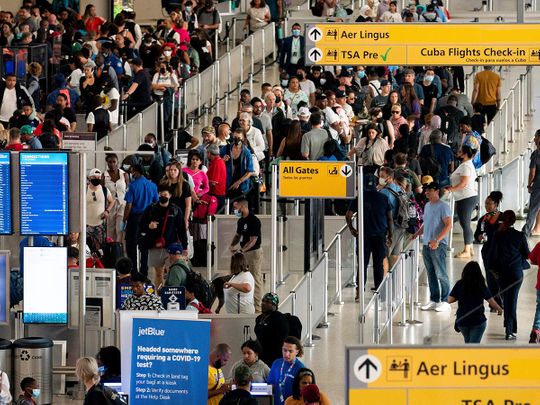 Thousands of flyers had their travel plans upset over the weekend in the US as airlines cancelled or delayed flights. More than 900 flights were cancelled on Sunday alone. A total of 6,378 flights have been delayed across the United States, as per the tracking service FlightAware.

It was the second straight day of major disruptions in air travel in North America. American Airlines cancelled 250 flights, or 7% of its schedule. Republic Airways, which operates smaller planes for American Eagle, Delta Connection and United Express, cancelled a similar number, about 25% of its flights.

With summer travel picking up steam, travel delays have become more widespread. Post the restrictions imposed due to Covid-19, air travel was among the top sectors expected to do well. In fact aviation bounced back in the US faster than expected — to about 88% of pre-pandemic levels in July — but airlines have been slow to increase staffing. Now faced with a peak, operators are cutting back on schedules in an attempt to make remaining flights more reliable.

Overall airlines flying in the US faced a not-so-good June, cancelling more than 21,000 flights or 2.7%, up from 1.8% in June 2019 (when layoffs began during the pandemic). The operators did better in July, however, cancelling about 14,000 flights, or 1.8%. Since then delays have been more persistent — above 23% in both June and July.

Some airlines, meanwhile, have put the chain of events down to weather issues and short-staffed air traffic controllers, but data suggests several airlines (mainly in the US, Europe and Australia) are still struggling to handle the demand for travel. 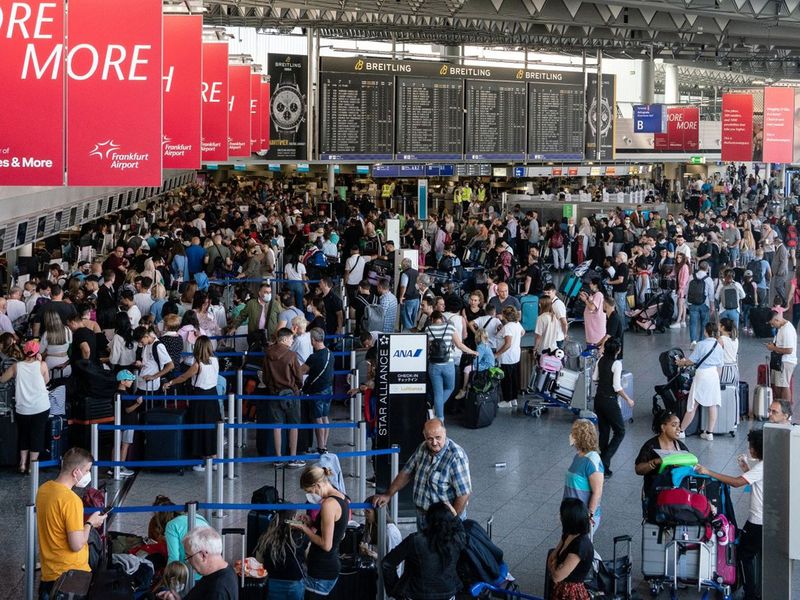 Worldwide airlines have found it tough to cope as pent-up travel demand rebounded post-pandemic. This has contributed to a number of flight cancellations. Also a lack of planning by the operators and how to schedule ahead of the summer peak travel have been contributing factors to the present chaos. Last few months saw major airports like London’s Heathrow and Amsterdam’s Schiphol limiting daily flights or passenger numbers.

The Dutch national carrier KLM cancelled an estimated 5.83% of its flights last month. Most of the disruption was witnessed at Amsterdam’s Schiphol, leading to KLM cancelling a bunch of flights. The reasons ranged from airport workforce shortages and passenger capacity regulations to the airline’s own lack of workforce numbers.

KLM’s owner Air France-KLM Group revealed, in its second quarter results, that compensating customers for flight delays had cost it 70 million euros ($71 million) during the second quarter of 2022. KLM is now cancelling up to 20 flights a day (and this will go on until the end of August). The airline has also restricted the sale of its budget tickets in order to minimise disruption.

Despite the airlines’ preparation for pre-pandemic demand levels, operators like Virgin Australia have faced major operational challenges. The airline, one of Australia’s biggest, cancelled the largest number of flights within the last three months. Virgin Australia scrubbed close to 2,200 flights — representing nearly 6% of its schedule — in the last quarter. The airline saw the worst delays for the period as its all 14 flights from Broome (Western Australia) to Perth could not leave within 15 minutes of their expected departure time.

The German flag carrier has cancelled more than 4,000 flights to date, including nearly 3,000 flights over the summer season in Frankfurt and Munich. According to a recent Reuters report, Lufthansa faces uncertainty from possible walkouts by its workers. The management was in talks on Thursday with ground staff, whose one-day strike a few days ago forced the airline to cancel more than 1,000 flights.

Striking a positive note Lufthansa said that it expected demand for short-haul flights in Europe to drive growth at its passenger airlines this year, forecasting a return to group operating profit for the full year, pushing its shares higher. “The Lufthansa Group is back in the black. This is a strong result after a half-year that was challenging for our guests but also for our employees … Worldwide, the airline industry reached its operational limits,” Carsten Spohr, CEO, Lufthansa Group noted

Asian aviation industry has been steady on path to recovery. According to the International Air Travel Association (Iata), international traffic more than tripled, with the lifting of restrictions in most parts of the Asia-Pacific region largely contributing to the growth.

June’s international air traffic in the Asia-Pacific was up almost sixfold, compared with June 2021, with capacity rising 139 per cent as per the global aviation body. The region, which is now open to foreign visitors and tourism, is expected to drive global aviation’s recovery, Iata added.

Experts note that the long-term vision of several airports in Middle East and Asia to retain their staff despite financial constraints gave these hubs a head-start.

At the Farnborough International Airshow last month, Akbar Al Baker, Qatar Airways CEO and one of Heathrow Airport directors, told media that airports such as Heathrow should have dealt with flight schedules better and calculated the disruption to flights this summer and provided airlines with a notice of the need to curtail schedules.