There are very few times when I can genuinely say that a hotel is unlike anything I’ve ever seen. But Calilo, a 30-suite resort on the Greek island of Ios, truly is in a class of its own.

Walking into the lobby is more akin to entering a high-end, post-modern art gallery in midtown Manhattan than showing up to a hotel in the Greek isles. Every wall is a work of art, some covered in hand-painted boots, others with vibrantly colored tile spelling out inspirational aphorisms. There is art hanging from the ceilings, wooden swings trellised in flowers and even decorated Vespas in the common areas. When you walk in, you don’t know which way to turn your head, let alone where to point your camera.

The solution is simply to slow down and appreciate the artistry, little by little.

Even the main pool at Calilo is a work of art. There are swings hanging over the water, carved out dining areas within the pool and exuberant sculptures of bodies being flung through the air. And it’s all in view of the resort’s pristine private beachfront. 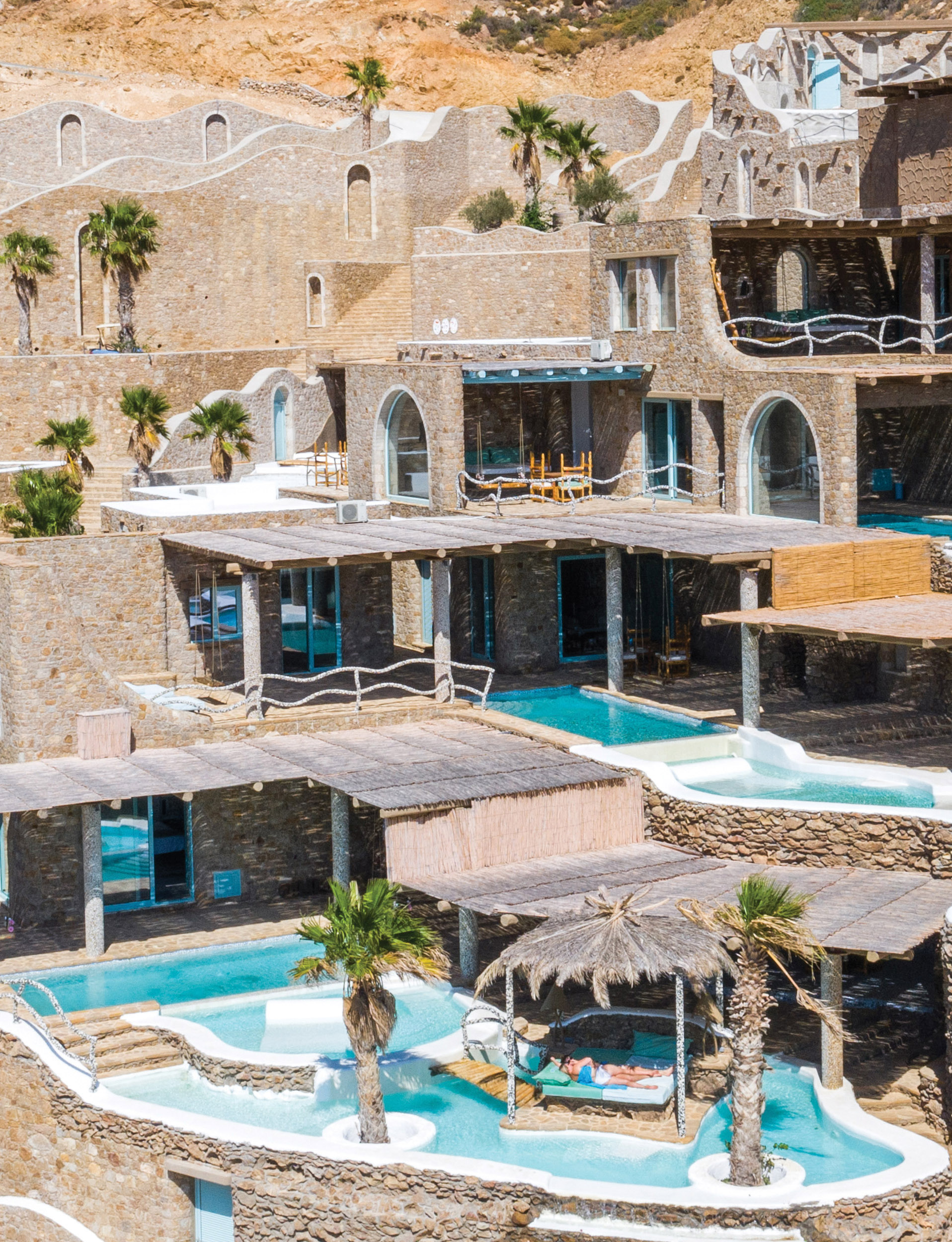 Opened in 2019, Calilo is a truly a destination in and of itself. Set on 1,000 acres of protected land about 12 miles from the island’s main town of Chora, the property has miles of walking trails, golden beaches, a wellness spa, enormous pools and a variety of suites ranging from one to three bedrooms set in the rocky, olive tree-lined landscape.

In the game of hotel room suites, size matters, and Calilo offers plenty of room for sprawling luxury. My one-bedroom suite had a massive marble bathtub, a king bed and one-of-a-kind furnishings. But even more expansive than the room itself was the outdoor space, which included private, open-air lounging and dining areas, a pool-sized whirlpool bath, an infinity-edge pool and a terrace.

The beauty of Ios

Then, of course, there is the island itself. Ios is still very much an under-the-radar Greek island, yet it offers a geographic perk that many of Greece’s other lesser-known islands don’t. Set between Mykonos and Santorini, this island is an easy-to-get-to, appealing retreat from the partying crowds of its more popular neighbors.

And did I mention the beaches? Over the past month, I’ve been to four Greek islands in search of post-vaccination solitude and a few good stories. And after visiting Ios, I can say with certainty that the island is home to some of the best beaches in the world. It’s not just the water — which is a perfectly clear, cerulean at some beaches, pale turquoise at others — it’s the lack of crowds. Even in the high season, crowds at beaches like Tripiti, Pikri and Manganari are sparse, locals told me. 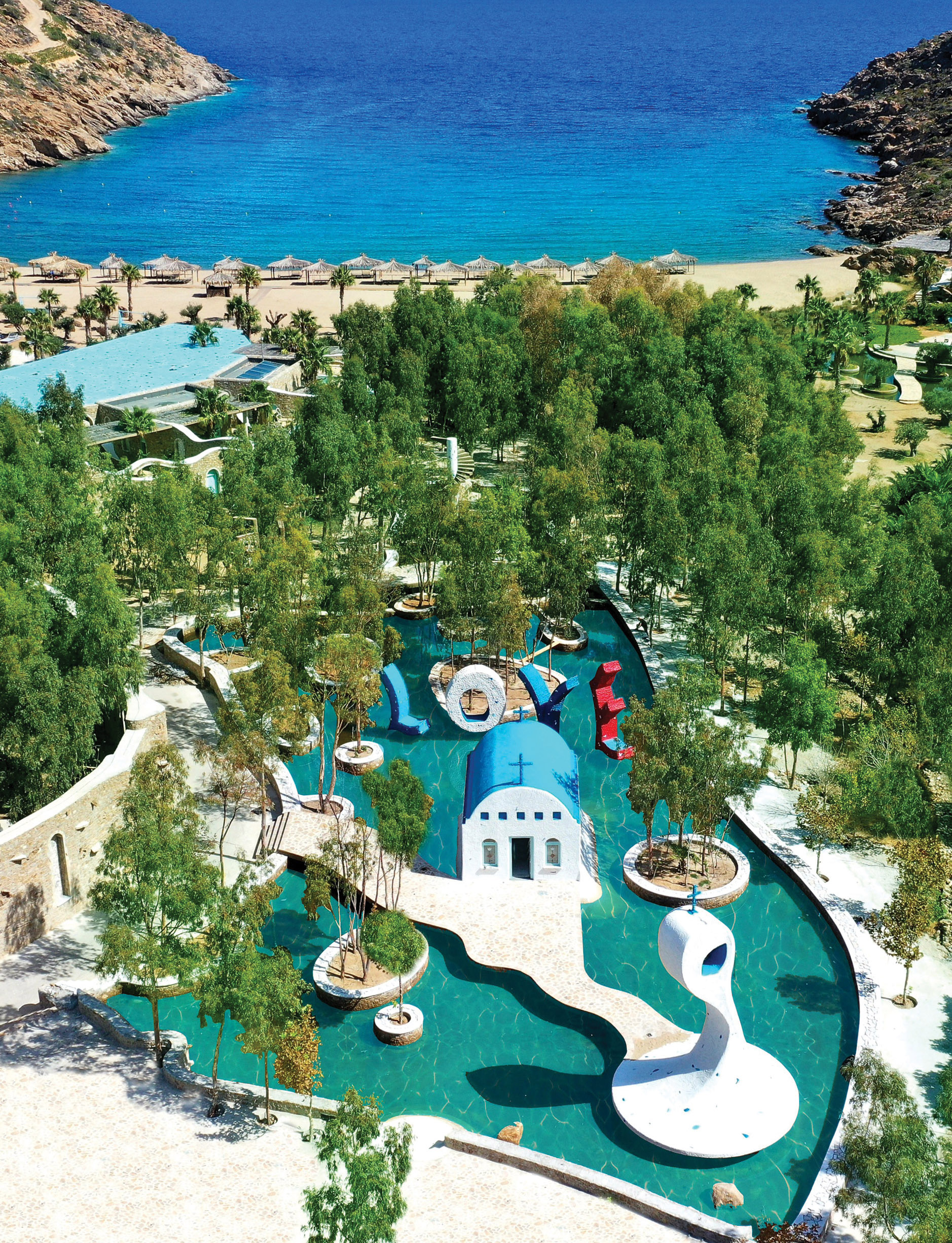 Spending time at Calilo and on the island itself felt like being welcomed into a family — the Michalopoulos family, to be exact.

The Michalopoulos family doesn’t just own Calilo, they own about 30% of Ios. But in an effort to preserve the beauty of the island, they have committed to leaving 99% of their land undeveloped.

Besides Calilo, the family company called Luxurios owns a second hotel, the Agalia Luxury Suites, and five bars, restaurants and beach clubs on the island. All are the textbook definition of a labor of love. Every element of the design is done by Angelos Michalopoulos. His wife, Vassiliki “Vasso” Petridou, runs Calilo, and each one of their five children is somehow involved in the family business.

Besides hosting me at Calilo, Petridou and Michalopoulos welcomed me into their home, as they do for many guests. Home, however, may be an understatement for their exceptional, Getty Museum-esque estate on a magnificent private island adjacent to Ios. The family’s private island is also where they test new designs for their properties.

Visiting their other properties is another part of the Ios experience, from the Erego Beach Club overlooking Koumbara Beach to Pathos Lounge,  which offers the best sunset view on the island.

In theory, the heart of the island is the town of Chora, known for its cube houses; narrow, stone-paved streets; and abundance of small hotels, bars, restaurants and nightclubs. But, in actuality, the Michalopoulos family feels like the beating heart of this island. They know everyone, they run the most happening places and their passion for Ios will make you fall in love with the island as much as they have.