SpaceShipTwo is a reusable spaceplane designed to carry two pilots and up to six passengers into suborbital space. 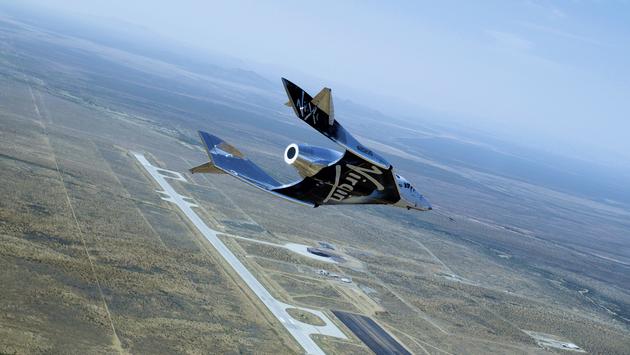 Virgin Galactic and its London design agency, Seymourpowell, said they strived to create an elegant, experience-focused concept for the cabin. It is designed to provide safety without distraction and offer each astronaut a level of privacy.

The seats are made of the highest-grade aluminum and engineered foam. Under Armour developed the astronaut spacesuits and also the 3D knit fabric featured in the cabin seats. The color palette includes golden metallics, blues and teals.

Each seat has been engineered to match the dynamism of the flight. A pilot-controlled recline mechanism positions astronauts to manage G-forces on boost and re-entry and frees up cabin space to maximize an unrestricted float zone when in zero gravity.

Mood lighting includes multi-color LEDs concealed within the window and surrounds and subtly reflects back the human responses to the contrasting stages of flight. As the Earth comes into view against the black sky of space, all lighting is extinguished, bringing focus to the vista.

SpaceShipTwo’s cabin was deliberately sized to allow out-of-seat weightlessness. Soft cabin surfaces can become intuitive hand and footholds. The “halo” surrounds and 12 windows have soft extended edges so the astronauts can position themselves for 360-degree views.

Sixteen cabin cameras, plus those in the cockpit and mounted externally, will generate high-definition still photos as well as a personal movie.

“When we created Virgin Galactic, we started with what we believed would be an optimal customer experience and then built the spaceship around it,” said Virgin Founder Richard Branson. “We will continue with that ethos as we expand our fleet, build our operations, and underpin Virgin Galactic’s position as the Spaceline for Earth. This cabin has been designed specifically to allow thousands of people like you and me to achieve the dream of spaceflight safely – and that is incredibly exciting.”

Those who want to be eligible for a spaceflight can make a $1,000 refundable deposit. It is unknown how much the actual flight will cost. In the FAQs on the Virgin Galactic website, it says it “may be able to offer a range of prices, but we will initially be charging more than the $250,000 price point offered to those who signed up early.”

The space flights will be preceded by three days of training at Spaceport America in New Mexico near Las Cruces. The overall flight time will be 1.5 to 2 hours, which includes about 30 minutes of independent flight time and “several minutes” of weightless, out-of-seat time.