Home » Holiday » Have you been to the Garden of Eden? It’s in Bedford

That the Garden of Eden remains absent from travel bucket lists is, perhaps, unsurprising. Unlike El Dorado or Lyonesse, however, its location is no mystery. It even has an address: 12 Albany Road, Bedford. And while the Victorian house is modest in size, its garden does boast a cosy tearoom, and how it came to be there is as surprising as its geography.

More than 200 years ago, religious prophets – spiritual gurus of their day – attracted loyal followers and occasionally courted scandal. One such was Joanna Southcott from Devon, who in 1814, at the age of 64, declared herself pregnant with the new messiah. The baby failed to materialise and Southcott died a short while later, but not before presenting a mysterious locked box to her followers. It was to be opened in a time of national crisis, and would bring peace and prosperity on Earth – but only if 24 bishops prayed over it for three days. Bishops being busy fellows, Southcott’s box remained unopened and passed down through her followers until it came to the attention of Mabel Barltrop.

In 1919, Barltrop, a Christian and proto-feminist, had established the Panacea Society in Bedford as a means of challenging her faith’s inherent patriarchy. Her community of like-minded women grew and came to believe that Barltrop was God’s daughter; that their “campus” was formerly the Garden of Eden; and that Bedford would be Jesus’s first port of call when he returned. They even prepared a house up the street, The Ark, for such eventuality, agonising over colour schemes and whether Christ would require a shower. Ever practical, the Panaceans rented out The Ark, on the understanding that in the event of a second coming, the contractual month’s notice wouldn’t apply. 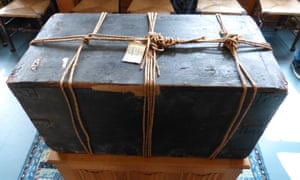 The group campaigned for decades to have Southcott’s box opened, paying for billboards and adverts declaring: “Crime, banditry, distress and perplexity will increase in England until the bishops open Joanna Southcott’s box.” There are tales of the box having been X-rayed or even opened, but its contents remain shrouded in mystery.

When the last Panacean died in 2012, a trust turned the house into a museum, with a tearoom in the grounds. A facsimile of Southcott’s box sits in one of the rooms, surrounded by two dozen empty chairs.

For now, the Garden of Eden remains closed. When lockdown ends, a visit is highly recommended. If you can find 24 bishops to accompany you, all the better.