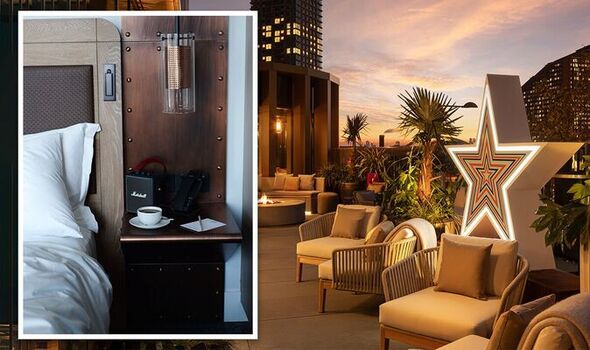 Part of Hilton’s hip Curio Collection, The Gantry calls Stratford it’ home. The East London neighbourhood shot to fame during the London 2012 Olympics but remains popular as a retail and dining district thanks to the sprawling Westfield Shopping Centre which is, quite literally, right next door.

The design-forward hotel stands out in a skyline of skyscrapers, its bronze, grated facade glinting in the sunlight. Once inside, the lobby is the same urban, chic you can expect to find in any major metropolitan hotel and stays true to the Curio brand.

Travelling business people take up several of the armchairs, tapping away at their MacBook Airs, while a few dolled-up groups wait for their taxi to a night on the sparkling streets of the capital.

The space is also shared by a pop-up branch of Colombian Coffee shop Hermanos, inviting guests to enjoy a freshly brewed cup as well as a selection of beans to take away.

Staff are welcoming and knowledgeable, even in the midst of an unexpected power cut which sent all of the hotel computers into darkness. On the night of a big event for the hotel, the timing was less than ideal, but staff remained calm and, despite a brief wait, check-in was a mostly smooth process.

The Gantry has 291 rooms split across 17-storeys, ranging from the King Gantry Room to a Gantry Suite. The hotel also offers accessible and twin rooms, as well as cots, blankets and baby baths for those travelling with tiny tots.

As you ascend the hotel, you’ll reach the top-tier rooms – they’ll likely have the best view, as well as a higher price tag. For our stay, we spent a night in the King Gantry Room which, considering it’s the hotel’s lowest tier, is pleasantly spacious.

Industrial-style decor is mismatched with a luxe velvet chaise longue and a king-size bed with fluffy, white pillows just begging for you to sink into them. And once you are enveloped by the cloud-like bed, you might not want to leave.

The bathroom is hidden behind a sliding door, featuring a contemporary sink, stylish black and white tiled floor and a huge waterfall shower, along with a handheld head. It’s also kitted out with Grown Alchemist toiletries, including a conditioner which was a welcome perk. The only downfall of our room was that the empty body cleanser container had been filled up with water, instead of being replaced.

While The Gantry typically hosts business people and tourists to the city, for one night only, the hotel was also welcoming an array of party guests to celebrate its one-year anniversary. The party kicked off downstairs, in The Gantry’s Union Social, Lounge Bar and Terrace Space, which had been transformed for a night of festivities. Union Social offers an all-day menu featuring flavours from around the globe, and for the birthday party, things were no different.

A selection of pop-up food vendors were on hand to feed grumbling stomachs, from a full roast to rich and creamy risotto. We opted for a delicious vegetarian dim sum dish, complete with rice noodles and vegetables. Drinks were in abundance too.

The night began with a champagne and oyster reception in the Coupe at Union Social, followed by a choice of wines, beers and cocktails created by Walter Pintus, an award-winning mixologist who has been involved in some of London’s finest institutions, including The Ritz and The Mandrake.

Music for the evening was provided by none other than DJ Fat Tony, best friend to Kate Moss, who is famed for being one of London’s most hedonistic party scene DJs before going sober 15 years ago.

As a DJ, he was a joy to spend a few hours with. Though his decks separated him from the sea of dancing revellers, Tony’s infectious energy washed over the crowd. Of course, no birthday party is complete without a cake. And for The Gantry, that meant an edible structure of the hotel itself topped with candles.

As the night drew to a close, feet aching from a disco-infused night of celebrations, we made our way back to our rooms and finally fell into bed.