Home » Holiday » Our best shots: from a bull in a saree shop to a sundowner in Timbuktu

Serengeti wildebeest migration
I don’t usually take many photographs on holiday but there are exceptions. Watching the wildebeest migrate across the Serengeti, it was hard to capture the vast numbers in a photograph. Looking at this picture reminds me vividly of shortness of breath and the hairs on the back of my neck standing up when I heard the sound of hundreds of thousands of hooves thundering across the great plains towards me, and the sight of the animals eclipsing my every view! 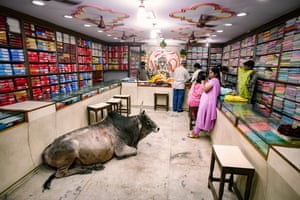 Bull in a saree shop, Varanasi
I’d just arrived in Varanasi and was heading for a recce to shoot people bathing down at the ghats the following morning, when my fixer pointed across the street to a shop selling sarees. There in the middle of the floor sat a bull, as calm as anything while salesmen and customers flitted around the shop. I went straight in to ask permission and then quickly started shooting, worried that the bull might decide to leave before I’d got the shot. The devoutly religious owners believed that Shiva, the Hindu deity who sits atop a perch at the back of the shop, sent the bull to them. Every day he would be waiting for the shopkeepers to open up in the morning, sit around all day minding his own business, before being turfed out again at closing time. 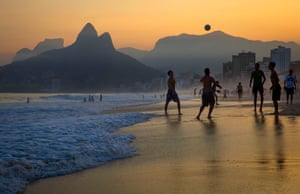 World Cup beach football on Ipanema
For the 2014 World Cup, I was based in Rio de Janeiro, where the England team had their training camp, and home of the giant Maracana stadium. It was also the base for thousands of fans from all over the world. I decided to document the endless games of football held the fans, as well as locals, on the city beaches.Ipanema was visual heaven: as the sun went down behind the mountains, gorgeous colours would reflect off the wet sand and waves would crash in, a delicate salty mist wafting over the games of keepy-uppy. The atmosphere was wonderful too, everyone realising how special it was. Time on that beach was probably the highlight of the trip for me – far better than anything I witnessed at the actual World Cup. 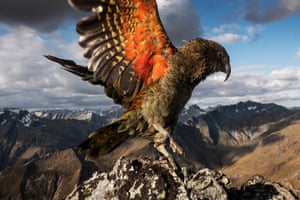 Whakaari conservation area
The endangered kea shown in the photograph is the world’s only alpine parrot, and one of the most intelligent birds. They show no fear of humans and are thieves and pranksters. One of the places they live is at the foot of Mount Larkin in the Whakaari conservation area on New Zealand’s South Island, an area rich in historic huts and mining relics, and surrounded by stunning mountains. There are grand views towards Mount Tutoko and Mount Earnslaw (also known by its Māori name of Pikirakatahi ) Lake Wakatipu, the Dart River and the Humboldt mountains. 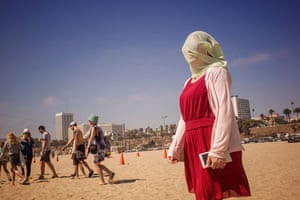 Woman on the beach
This was shot was taken on Santa Monica beach in Los Angeles as part of a series called West of West (recently published as a book by Unbound) that focused on the end of the legendary Route 66. I must admit I’ve chosen this now as a nod to the strange times we are living in, though this woman – who wasn’t really aware of me taking the picture – was just protecting her skin from the harsh California UV rays rather than a potentially deadly virus. 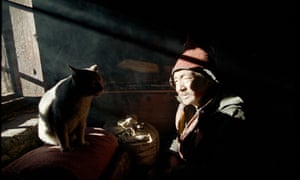 A monk and his cat
On the last morningof a trekin Bhutan with writer William Sutcliffe, I walked up the mountain to a monastery. It was heady with incense and the dark interior was pierced by shafts of sunlight. Half-a-dozen monks were sitting on the floor, chanting and I felt I was intruding. A little further on, outside a small dilapidated cottage with smoke spilling out of it, an elderly monk smile at me and then darted inside. This was the scene I encountered: a monk and his all-grey cat and lots of smoke. This was shot on negative film. I hope he received the print I sent. The address was quite obscure. 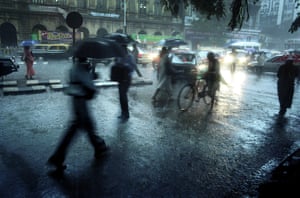 Chasing the monsoon
I took this towards the end of a day I had spent walking around Mumbai in the summer rain. Inspired by a 1990 book called Chasing the Monsoon, by Alexander Frater (who died just a few months ago), I had wanted to see the monsoon at first hand. I thought the most dramatic place to see it might be Mumbai. My wife and I kept a keen eye on the progress of the monsoon that year, with the help of a kind man from the BBC weather department. Just before it was due to reach the city, we booked our flight and off we went for a week of rain. It was a very memorable time. Mumbai was very exciting and it rained every day. 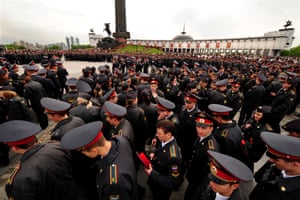 Victory Day parade
It’s been years since I last travelled to Russia but it remains the most exciting place I’ve ever been. I feel a huge amount of love and respect for the country and its people, but also a huge sense of outrage at all the injustice and suffering. I was there to record the Victory Day celebrations on 9 May, marking the surrender of Nazi Germany in 1945. There are always massive parades of soldiers and police, patriotic concerts and a wonderful tradition of people giving flowers to war veterans. At the time of writing, Moscow was considering postponing the celebrations for 2020, the 75th anniversary, or holding the parades in front of empty stands. 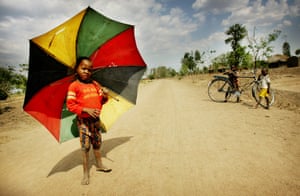 Small boy with an umbrella
The Tambani area of southern Malawi is very remote, with only basic dirt roads between the villages. A severe drought in 2005 led to a food crisis, with people starving because aid was not getting through to them. Malawian people are running out of food again because of poor crops and bad weather this year, and because of the pandemic, aid agencies such as the UN World Food Programme are struggling with low donations. Current estimates are that five million people will starve unless help is sent now. 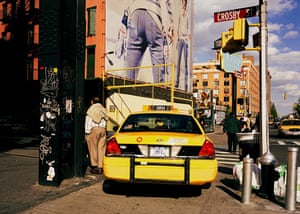 Taxi driver
In April 2002 I spent three weeks in Manhattan, working on a project documenting taxi drivers from the South Asian diaspora. Doctors, lawyers and other professionals, whose qualifications did not allow them to work in their chosen professions in the US, had taken up driving taxis for a living. This gave them control over their new lives and offered them a way to integrate into American society. Every day I would walk with my Mamiya 6×6 film camera and light meter on the hunt for yellow taxis. In this picture, the driver seemed to mirror the model on the billboard, which said something about the enduring nature of the American dream. 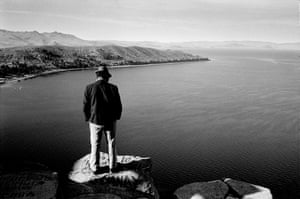 Lake Titicaca, a jewel among the peaks
I took this on a Sunday morning in the town of Copacabana, on the Bolivian side of Lake Titicaca. The Andes is my favourite part of the world. I love the way the mountain rangeholds a fine balance between the pre-colonial indigenous and Hispanic cultures. Lake Titicaca, often called the highest navigable lake in the world, is like a jewel among the peaks. In the last days of the 20th century, I got up early, hiked up the mountains and encountered this man looking at the lake. He could be me, meditating on the beauty of the lake and its surrounding mountains. 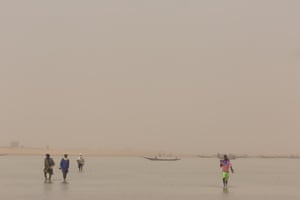 Fish sellers on the River Niger, Mali
I visited Timbuktu in 2014 with Alex Duval Smith, the late foreign correspondent, a year after French and Malian troops retook Timbuktu from Tuareg and Islamist rebels. The faded but still glorious city dates back at least to the 12th century, and became a wealthy trade hub for salt, gold and slaves, as well as a major centre for learning and music. I stayed in a hotel by the Djinguereber mosque with one other guest and one staff member, who left at night. I expected to see the ghost of Sydney Greenstreet wandering the empty corridor. Alex picked me up and we bumped along to the small village of Toya, where people went from Timbuktu to buy fish. This photograph reminds me of the pleasure of working with Alex and having a beer or vodka with her as the sun went down.