The Spanish tourist industry collapsed virtually overnight when the government declared a state of emergency on 14 March. But now most hotels and restaurants are open, with limited capacity and social distancing. 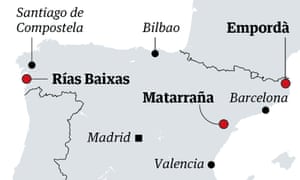 The country is keener than ever to welcome visitors, and there’s plenty of scope for a relaxing holiday in these less-visited regions.

Rías Baixas is the Galician name for the five estuaries (rias) that indent the coast like crooked fingers. This Atlantic coast is known for rainy, chilly summers, but the Rías Baixas are shielded by a series of islands – Cíes, Ons, Sálvora, Rúa. The sea around here is bracing, but rarely rough, and the rias have some of the best beaches in the country. From the UK, the simplest (though by no means cheapest) way to get here is to take a ferry (Portsmouth-Bilbao or Plymouth-Santander – both Brittany Ferries), then drive.

The lively resort of Sanxenxo, on a beautiful beach, is popular with Galicians and will get busy. The Hotel del Mar Sanxenxo (doubles from around €80) on the seafront at Playa de Silgar (the town’s main beach) is family-run and a little old-fashioned but offers good value. For a quieter vibe, head inland a little: the small but excellent Quinta de San Amaro hotel (doubles from €155), set in vineyards in Salnes, offers rural comforts plus easy access to the sea.

A day or overnight trip to an island is a treat. Visitor numbers on most are now regulated so apply for a permit in advance. Playa del Rodas on the Cies islands has been described (by the Guardian no less) as one of the world’s most beautiful (ferry from Vigo, Cangas or Baiona). On car-free Ons, there is a brilliant campsite (pitch from €21 a night). Ferries from Bueu and Portonovo. 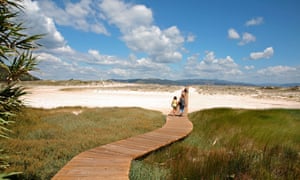 Away from the beach, potter around the harbour town of Cambados, with its elegant 16th-century Praza de Fefiñáns and the traditional horreos (stone granaries) along the waterside. After a long lunch of modern galego cooking at Yayo Daporta, head to Fundación Manolo Paz, a sculpture garden on the Umia estuary where the Galician artist has installed a collection of his enormous artworks in steel and stone.

Galician food is simple: classic fish and shellfish. Harbourside A Meca on gorgeous Arousa island does a textbook pulpo a feira, the signature octopus with olive oil and paprika. Not least of the pleasures of the Rias are the aromatic albariño wines, perfect with all that seafood. 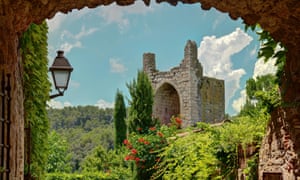 The loosely defined but proudly Catalan region of Empordà, stretching to the French border north of Girona has a well-upholstered rural beauty and is often compared to Tuscany.

Single-track roads meander across a landscape so luscious (vines, olives, cornfields, pinewoods) you could practically sink your teeth into it. A road trip is a good option here, stopping for a stroll and a cervesa in medieval villages such as La Pera, Monells and Peratallada (where Bonay restaurant is a classic of down-home Catalan cooking). Lovely Madremanya has streets of sun-warmed stone and two pretty rural lodgings: La Plaça (doubles from €123 room-only) and El Racó de Madremanya (doubles from €135 B&B).

The dominant architectural style hereabouts is Romanesque in excelsis, from the dramatic scale of the monastery of Sant Pere de Rodes to the simple magic of the austere church and cloister of Santa Maria de Vilabertrán, a lesser-known 11th-century gem. Follow the Salvador trail from the surrealist Teatre-Museu in Figueres to the minuscule hamlet of Púbol where Dalí, a local boy, set up his wife Gala in her own fairytale castle.

It’s possible to eat badly in the Empordà, but you’d have to try quite hard. Cuina empordanesa is rich, historic and often surprising, its medieval roots showing in combinations like goose with pears and pig’s trotters with turnips. Restaurants worth seeking out include Ca l’Arpa in Banyoles, El Motel at the Hotel Ampurdán outside Figueres, and Ca La Maria in Mollet de Peralada – another swooningly picturesque village. Just outside Mollet stands La Vinyeta, a dynamic young celler (winery) where Josep Serra and Marta Pedra make characterful wines with grape varieties like carinyena and garnatxa blanca. Stay on for a picnic in the vineyard (a house speciality) and a night in one of La Vinyeta’s rustic lodges (doubles from €135 B&B, with tasting and vineyard walk). 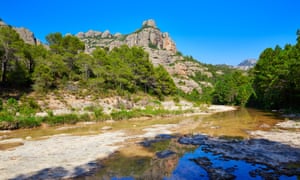 Arriving in Matarraña feels like stumbling on a piece of genuine wilderness. Valleys lined with olive groves and pines give way to high limestone peaks. The area, an hour’s drive from the coast and three from Barcelona, is watered by the fast-flowing Matarraña river, which offers kayaking, swimming and a spectacular (but easy) hike along the Parrizal gorge, with its teetering cliffs and turquoise river-pools.

With little traffic, getting around by car is a pleasure. Memorable drives include the single-track road out of La Portellada towards the village of Ráfales. At restaurant La Alquería in Ráfales, José Antonio Higueras and Clara Lapuente will fix you a lunch of almond soup and Aragonese lamb. (Their little hotel above the restaurant is also recommended: doubles from €89 B&B.)

As young people move to Zaragoza and Barcelona, Matarraña’s 18 historic villages are rapidly depopulating, though their stunning Gothic churches, arched galleries and palatial houses remain resolute. It is hard to pick a winner: perhaps Calaceite, La Fresneda, or diminutive capital Valderrobres. And for sheer architectural thrills, book a stay at hotel Consolacion (doubles from €151 B&B), which has won awards for its 10 Mies van de Rohe-influenced cuboid cabins. It has slate-lined sunken baths, woodburning stoves for chilly mountain nights, and mind-expanding views over pine forests – you could almost be in Canada. The restaurant at Consolación (rustic local ingredients with a touch of Barcelona chic) is worth the detour even if you’re not staying.