The Association of Professional Flight Attendants (APFA) has found that 100 American Airlines’ flight attendants have tested positive for COVID-19, highlighting the need for protective gear, and the airline has agreed to begin providing masks to flight attendants who want them.

According to the APFA, the union has been asking for protective gear since January.

“We have consistently advocated for Personal Protective Equipment (PPE) for all of our flight attendants to be available on every aircraft, for social distancing between passengers and crew jump seats, for thermal scanning in the airports, and to receive immediate notification of flight attendants who have tested positive for the virus,” Hedrick told CNN. “Flight attendants are aviation’s first responders, who are transporting medical personnel and supplies into COVID-19 hotspots, and they need to be treated and protected as such.”

The airline responded that they are taking safety precautions and following guidelines.

“The safety of our customers and team members is our top priority,” said a statement from American Airlines. “We are in close contact with the Centers for Disease Control and Prevention and public health officials and are coordinating with them on any required health and safety-related measures. We continue to look at all ways we can care— and protect—our team during this stressful time.”

While the PPE will help frontline personnel, many will not be flying. The union noted that just one in four flight attendants will be flying in the coming months due to the impact on airlines from the coronavirus outbreak.

American Airlines announced Thursday it would be forced to cut capacity again this summer as record-low customer demand caused by the coronavirus outbreak continues to devastate the aviation industry.

The airline revealed it would suspend more than 60 percent of international capacity for the peak summer travel season when compared to the same period last year and delay the launch of new routes until 2021.

The new flights impacted include service between Philadelphia and Casablanca, Chicago and Krakow, and Seattle and Bangalore. In total, 25 summer seasonal flights will be suspended until summer 2021.

The reduced summer schedule will be reflected on American’s official website on April 5.

In addition, the carrier announced several routes scheduled to debut in October would now debut winter 2021, while several flights originally slated to resume in early October would return at the end of the month.

Airlines around the world have been impacted by the viral outbreak, as Southwest Airlines announced a new flight schedule earlier this week that would reduce flight activity by more than 40 percent, limiting the low-cost carrier to approximately 2,000 flights per day.

The aviation industry is also on high alert after United States President Donald Trump said he is reluctant to shut down airlines, but did acknowledge that asking carriers to cut back on flights between cities hardest hit by the coronavirus is an option.

U.S. air carriers continue to trim flights as worries about the coronavirus pandemic prompt business and leisure travelers to stay at home.

The latest cuts, announced Friday, were made by American Airlines and Delta Air Lines. They follow similar moves by competitors such as Southwest Airlines and United Airlines.

American announced on its website that May capacity will drop between 70-80%. (The Fort Worth, Texas-based airline’s April capacity was down between 60-70%.)

Start the day smarter. Get all the news you need in your inbox each morning.

American’s international capacity for both months will be down between 80-90% year over year.

“These changes are due to significantly decreased customer demand and government travel restrictions related to coronavirus,” American said in its online announcement.

American’s website will reflect the latest April cuts by Sunday; May reductions will be uploaded by April 5.

American has also suspended service to three airports in Hawaii, where a new 14-day quarantine is in effect for travelers. Those airports are Kona, Lihue and Maui. There will be just one flight per day from Los Angeles to Honolulu.

American said it will waive change fees for tickets purchased before April 15.

“When this hits one of your own, it sheds a whole new light on the coronavirus. This does spread more fear among our ranks,” she said. “This is a killer virus, unlike any we have experienced.”

Delta announced on its website that it would slash additional international flights to Europe, Asia, Canada, Mexico and the Caribbean. However, it did not give a specific number or percentage for the number of cut flights.

It is making the following reductions in service:

Delta has waived change fees for all flights departing in March, April and May. For tickets purchased between March 1 and April 15, change fees will be waived for up to a year from the date of purchase.

Delta typically has in excess of 5,000 daily departures.

Delta also announced Friday that it would be offering free flights to medical volunteers looking to fly to the “front lines” to help fight COVID-19 in “significantly impacted” areas of the country. The flights will begin departing in April and are available for booking up to three days before takeoff.

“Eligible medical volunteers will be able to book round-trip Delta flights free of charge to Georgia, Louisiana and Michigan, where they will work in coordination with the state and local government offices,” Delta said in the announcement.

Georgia, which is home to Delta’s Atlanta headquarters and the U.S. Centers for Disease Control and Prevention, had more than 2,400 positive cases of coronavirus and 79 people in the state had died as of Saturday evening.

American Queen Steamboat Company (AQSC) and her sister carrier Victory Cruise Lines (VCL) have offered up their currently-idle ships for use by the U.S. military for personnel that may need to be quarantined amid the COVID-19 health crisis, Travel Weekly revealed.

These Hornblower-owned companies join the ranks of travel operators, including hotels and cruise lines, who have made offers to the government to use their facilities to quarter patients and personnel while the coronavirus pandemic sweeps the nation.

Last week, in a similar move, cruise industry giant Carnival Corp. offered its ships to aid the government by serving as temporary hospital facilities while the coronavirus crisis persists. The White House has yet to declare news of whether or not it will be taking the company up on its offer.

AQSC and VCL suggested in a statement that they are, “currently exploring ways to work with the U.S. federal government for their usage of our vessels.” The proposed usage would be to house military personnel who require quarantining upon arrival from outside the U.S. or prior to departing for foreign shores.

“AQSC and VCL would be pleased to assist the federal government during this crisis, and our six vessels are readily available and on standby,” the company said.’

Cities in which the cruise lines’ vessels could potentially be stationed for such purposes include New Orleans, Norfolk, Miami, San Diego, Seattle and St. Louis. 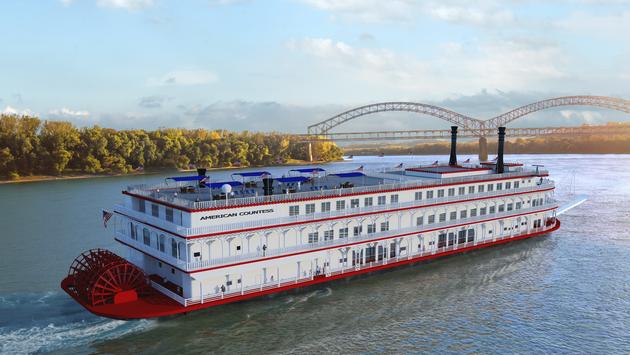 AQSC also announced today that it would be extending the temporary suspension of operations across its entire fleet through May 16, 2020, in response to the evolving conditions caused by the COVID-19 outbreak, which include the ongoing, widespread application of governmental restrictions across ports, cities and public institutions.

AQSC’s customer service team is reaching out directly to all guests and their travel agents impacted by the cancellation of those 20 sailings scheduled to take place between April 11 and May 16, 2020, regarding their available rebooking and refund options.

A special incentivized future cruise credit of 125% of the original cruise fare is being offered for use on future sailings in 2020 or 2021, or guests can alternatively seek a full refund of the original fare.

This website uses cookies to improve your user experience and to provide you with advertisements that are relevant to your interests. By continuing to browse the site you are agreeing to our use of cookies.Ok