Many airlines began cutting back onboard food-and-beverage service in March 2020, as COVID-19 started to sweep the globe. The modified operations aim to minimize passenger-to-crew interactions and the handling of items that could prove potential conduits for infection; as well as cut down on costs during the worst period of economic hardship aviation industry’s entire history.

Now, CNN reports that several worldwide airlines are taking things a step further by axing the availability of alcoholic beverages aboard their flights. Many carriers have already narrowed their drink options to water (usually individual bottles) and are supplying sealed, pre-packaged snacks or meals in place of conducting their regular meal service.

Passengers have largely been encouraged to bring their own snacks and beverages aboard, rather than relying upon in-flight service, which has become minimal all-around. In many cases, cabin crew are also monitoring use of the lavatories, so it’s probably best that passengers don’t get loaded up on drinks while onboard.

As face masks or nose-and-mouth coverings are mandated by virtually all global carriers at this point, limiting food and drink consumption should also offer people fewer excuses for removing their facial coverings while in flight.

—American Airlines: American has modified food and drink service according to flight duration and destination, and, on the whole, alcoholic drinks will not be available in the main cabin. First Class customers, however, and even Main Cabin passengers on international long-haul flights are still being provided access to alcohol.

—Southwest Airlines: Southwest has suspended all of its in-flight snack and beverage service, with the exception of canned water, available upon request. 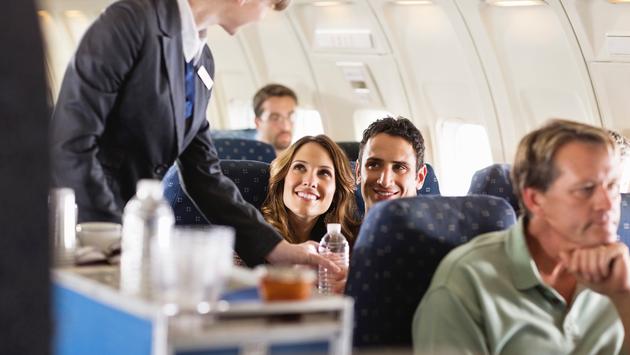 —British Airways: The U.K.’s flag carrier has paused service of alcoholic drinks in its short-haul economy class (called ‘Euro Traveller’), instead offering customers bottled water and complimentary, light refreshments. Juices and hot drinks can also be had by asking a crew member.

—Easyjet: Currently, the British low-cost carrier is limiting refreshment options to water, which must be requested from the crew, though it plans to resume food service gradually over the coming months.

—KLM: The Netherlands’ flag carrier has suspended service of hot and alcoholic beverages, though water and soft drinks remain available upon request. Pre-packaged snacks and refreshments await passengers at their seats upon boarding, and passengers on flights lasting longer than nine hours will also be served one hot meal.

—Ryanair: The Irish budget airline is service only pre-packaged food items, and requires passengers to pre-order food and drinks prior to boarding. Beginning July 2020, hot-drink service will be suspended, but alcohol is still available.

—Virgin Atlantic: The British-based carrier is providing a single, streamlined meal service that’s delivered alongside juices and soft drinks. Water and orange juice will continue to be available throughout flights. 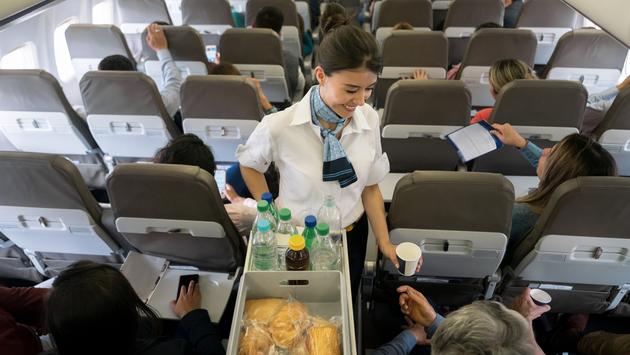 —Cathay Pacific: Hong Kong’s flag carrier is still making drinks, including the alcoholic variety, available throughout its flights, but has suspended its pre-meal bar and pre-poured drinks service.

—Virgin Australia: The Aussie airline has temporarily simplified its offering, providing passengers with complimentary water and snacks, but without additional food or beverages available for onboard purchase.