Theme park aficionados have gotten used to queuing virtually in recent years. Now, airports are beginning to experiment with similar technologies for use at TSA security checkpoints.

Virtual queuing trials are underway this summer at Seattle’s SeaTac Airport and at Boston Logan.

Airports, and the vendors partnering with them on the trials, say the deployments are geared toward making the airport experience less stressful for flyers. Virtual queuing could also reduce crowding as Covid-19 continues to be a concern. And passengers who are no longer physically waiting in line have more time to visit restaurants and shops, boosting airport concessionaire revenues.

“I have a 3-year-old,” said Jared Evers, director of content and communications for VHT, the Tennessee-based company that is partnering on a virtual queuing trial at SeaTac’s TSA checkpoint 2, which serves Delta and other airlines. “Being able to just rest at a table and wait until it is our turn, it’s such a stress-relieving process.”

The Seattle trials began in early May and will last until Aug. 31. The airport is conducting a second trial at its TSA checkpoint 5, which serves Alaska Airlines passengers. Both are operating under the marketing name of SEA Spot Saver. 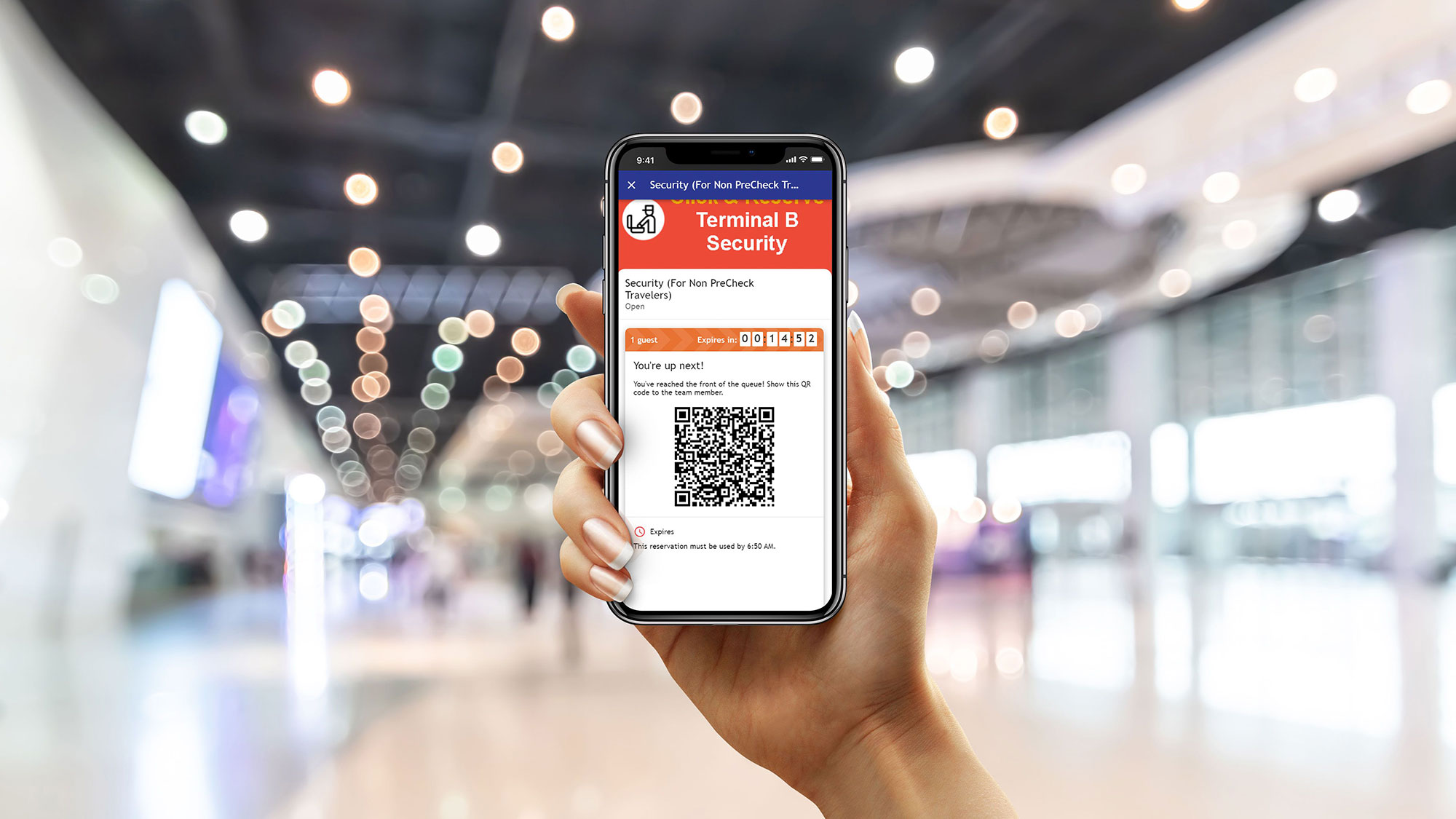 Logan Airport officials declined to comment on how the pilot program is going, but Accesso Technology Group, Logan’s virtual queuing technology partner, said that in a recent survey of users of the solution, 96% said that the virtual line helped make traveling less stressful.

SeaTac spokesman Perry Cooper said it is too soon to know if the systems are reducing physical lines, though early signs are good. “We’ll see as volume continues to grow over the summer,” he said.

Accesso is no stranger to virtual queuing. Its solutions are currently used at most Six Flags properties as well as at Legoland locations and other theme parks, said Sebastian Hinds, the company’s director of product management for queuing.

Boston flyers who choose to use Accesso’s technology scan a QR code with their phones at screens located near the airport entrance. Users are then taken to a web interface, where they make a reservation for the security line and are told how long it will be before they can present themselves at the line entrance.

Subsequently, a countdown within the browser session will enable passengers to see their remaining wait time, and they will be notified when it’s their turn to enter the line.

At the line’s entrance, airport staff scan the QR code on the flyer’s phone to verify the reservation. Passengers have an approximate 15-minute window to honor their reservation, Hinds said.

Accesso envisions expanding the capability of its Qsmart platform to allow for advance reservations, so flyers can set their checkpoint arrival time before going to the airport. “A future with no queues, that’s where we’re going,” Hinds said.

VHT, a leader in call center queuing technology, is also centering its airport virtual queuing technology around QR codes. After scanning the code with their phones, users communicate with the system via texts. They receive texts updating their status in the virtual line and can also request additional updates via text.

Thus far, the virtual queuing pilots are not integrated with TSA PreCheck, meaning all users must remove their shoes and go through the full screening process.