Home » Travel » A Dolomite delight: Why San Luis is the ultimate mountain retreat

A Dolomite delight: Lakeside chalets, steaming hot tubs in the snow, restorative treatments and skiing on the doorstep – San Luis is the ultimate mountain retreat 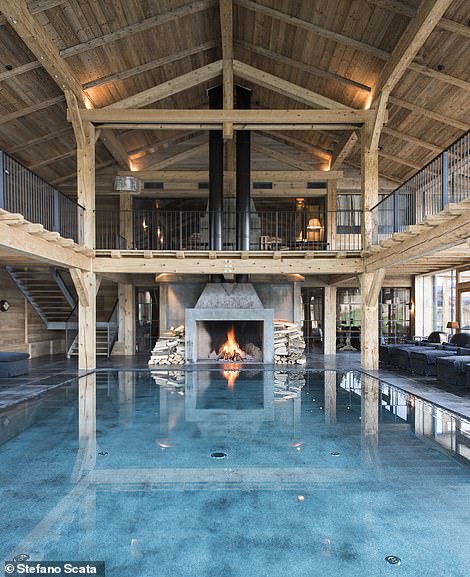 Inviting: The indoor pool and open fire at San Luis Retreat, which lies in the Italian region of South Tyrol

German and Italian cultures have little in common. One drinks wine, the other beer. One loves pasta, the other reveres potatoes. One works to live while the other lives to work.

Sweeping generalisations indeed. But they’re not unfounded, which is what makes the Italian region of South Tyrol so intriguing.

Lying at the foot of the Dolomites, with Austria to the north and Switzerland to the west, the region was once part of the wider Austro-Hungarian Empire.

It was seized by Italy in 1918, yet despite Mussolini’s attempt to Italianise the area by forbidding German and pushing Italian vocabulary and culture, locals fought valiantly to protect their identity.

Street signs are now written in both Italian and German, and locals speak the languages interchangeably.

On our two-hour drive north from Verona airport, we pass mile after mile of apple orchards framed by mountain peaks which are arranged like rows of sugar-dusted panettone cakes before arriving at the fairytale resort of San Luis. 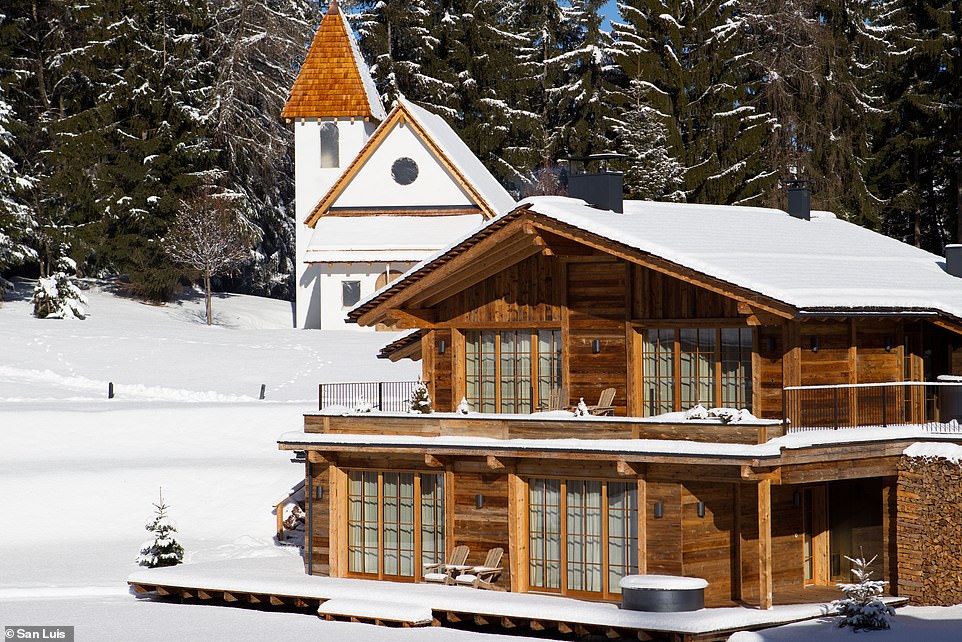 One of the chalets at ‘fairytale’ San Luis. ‘Set in Italy’s far north, this inspiring retreat has much to offer,’ says Harriet 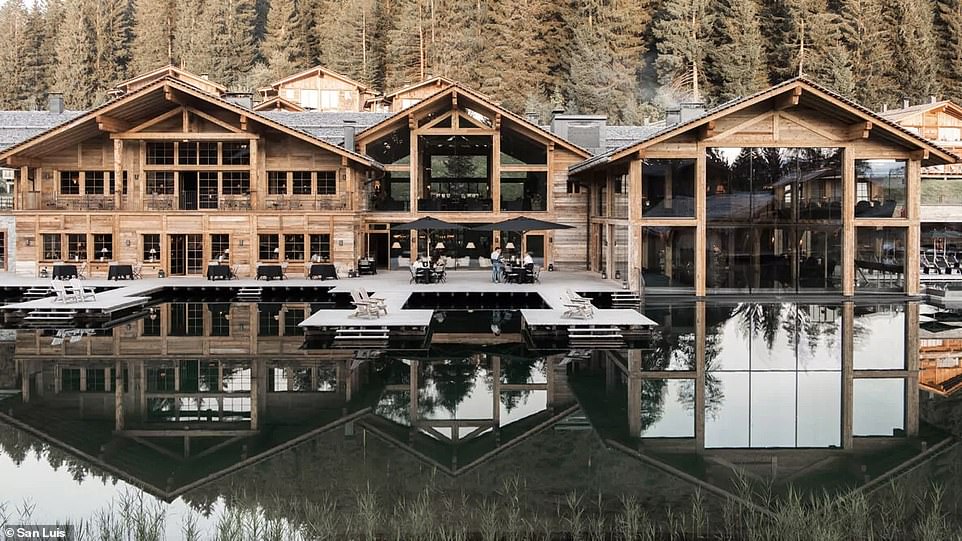 Set in Italy’s far north, this inspiring retreat has much to offer: there’s a huge spa with open fires, more than 40 acres of forests and fields and an inexhaustible supply of fresh air. What’s more, the nearest ski slopes are just a 15-minute drive away.

Guests — mainly young, glamorous Italians — have a choice of 26 chalets set around a frozen lake or 16 swish treehouses.

Snow starts to fall as we’re taken from the central building, which houses the restaurant and indoor-outdoor pool, to our lakeside billet. 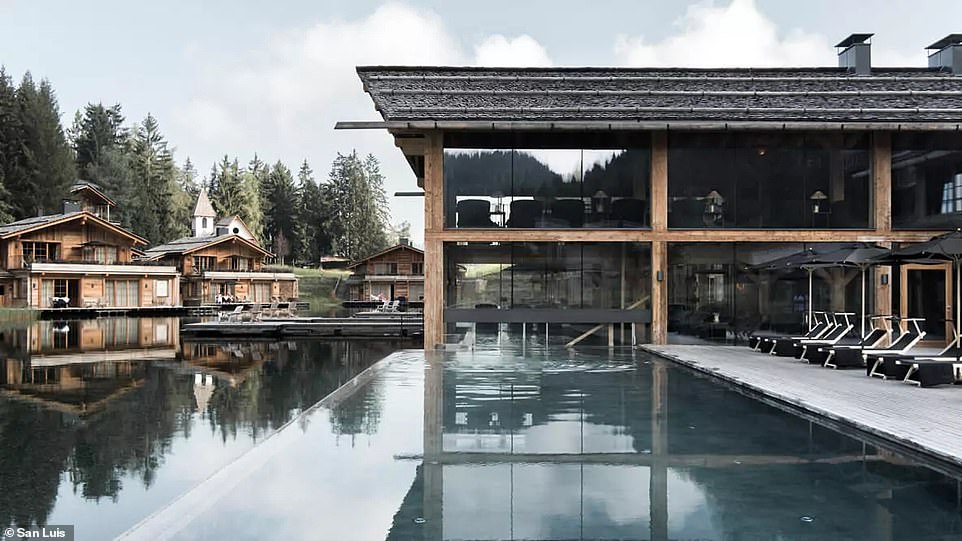 ‘There is more to the resort than simply relaxing by the lake,’ says Harriet. Above is the retreat’s infinity pool, which looks out to the lake 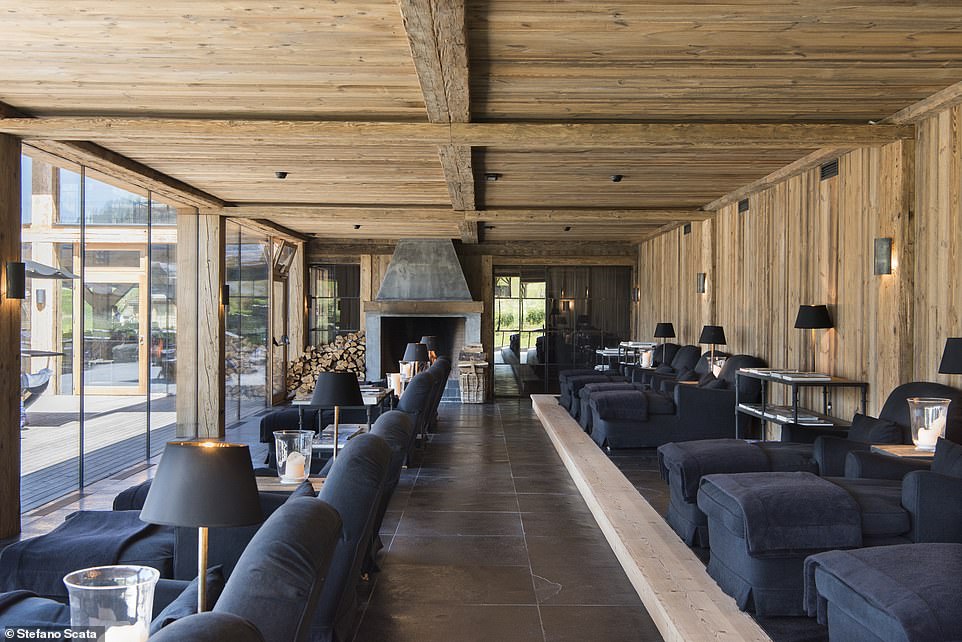 San Luis’ guests – mainly young, glamorous Italians – have a choice of 26 chalets set around a frozen lake or 16 swish treehouses

Inside, the fireplace is already lit, crackling and popping as we snoop around a series of little rooms, all decorated in warm creams and recycled timber.

There’s even a sauna and hot tub on the balcony, so Chardonnay from the fully kitted-out kitchen in hand, we jump in and watch the steam as it swirls in the icy air.

After lunch we scamper across the frozen lake to the pool, which is surrounded by huge floor-to-ceiling windows that overlook the snowy world outside. A gigantic open fire is at its centre, with logs piled to the side, so we top it up, jump in the water and drift from the pool inside through glass sliding doors to the outdoor section.

Back inside, huge candles flicker. We’re later told that more than 100 are lit in the resort at any one time.

Frosty glasses of Aperol Spritz are delivered to our squishy sofa beds as the sun drops slowly behind the mountains and the sky turns dusty shades of pink. Magnifica! Or should I say, Wunderbar!

There is more to the resort than simply relaxing by the lake. 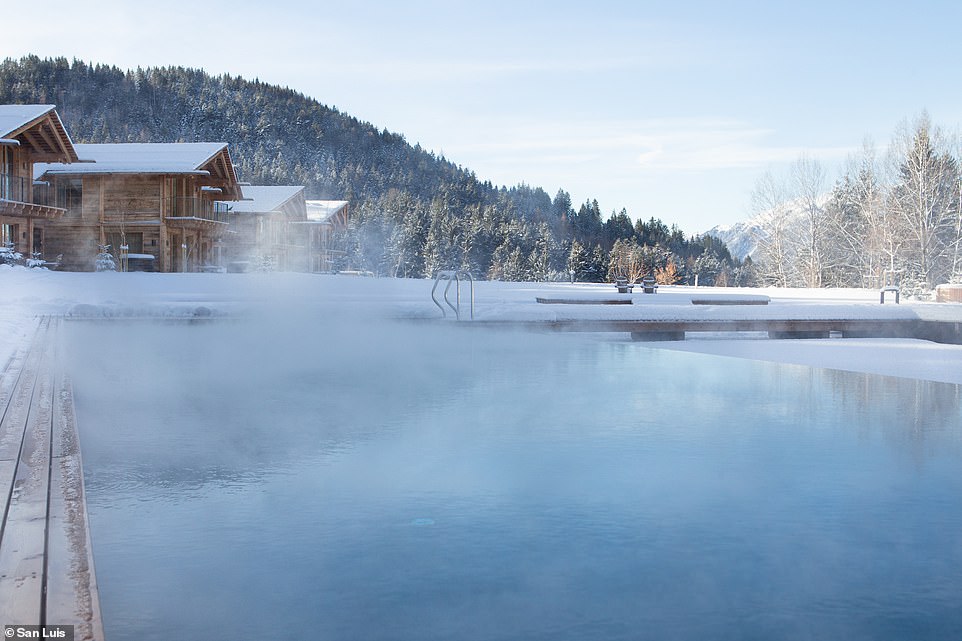 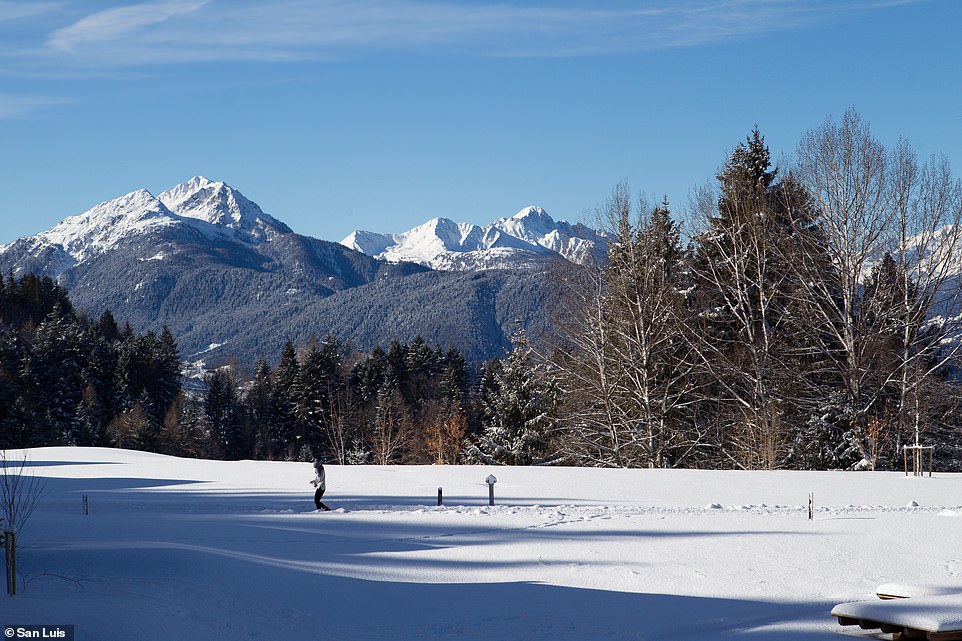 The nearest ski slopes are just a 15-minute drive away from San Luis, Harriet reveals. She undertakes a ski session with an instructor who used to be in the Italian national skiing team

One morning, we head to the slopes at Merano 2000. Here, we meet Thea Gambell, a ski instructor in her 60s who used to be in the Italian national skiing team. I immediately like her; she’s super-fit with leathery skin and wears a kind smile.

Three hours are spent chatting away on the slopes while passing plummy hikers with fluffy dogs and children hurtling down allocated paths on sledges.

It is here, during lunch at Thea’s favourite mountainside restaurant that we witness the Italian and German cultures up close as rosy-cheeked locals mingle — greeting each other with a mixture of ‘ciao’ and the German ‘Grüss Gott’.

The food is a culture clash, too, with plate after plate of local delicacies: cheese dumplings doused in butter, gnocchi Gorgonzola, venison with spicy polenta and gravy, then apple strudel with dollops of custard and vanilla sauce.

Somehow you feel it shouldn’t work, but it does. All that German practicality, all that Italian flair — in a simply sublime setting.