Home » Travel » A little Italy… in Greece: The undiscovered island of Syros

A little Italy… in Greece: The undiscovered island of Syros is an Italianate masterpiece and hopes to have us in the picture this summer

Ermoupoli is possibly the most extraordinary town in Greece. There’s no maze of alleys, no whitewashed houses and no heaps of tangled fishing nets in the harbour.

What you get instead is a busy city, whose broad squares, grandly domed churches and pastel-coloured mansions look more Italian than Greek.

Ermoupoli is the capital of Syros, an island of 22,000 souls in the middle of the Cyclades. New fast catamarans started docking there last year, which is how tourists discovered it — they use it as a pit stop between Mykonos and Piraeus, the main port of Athens. 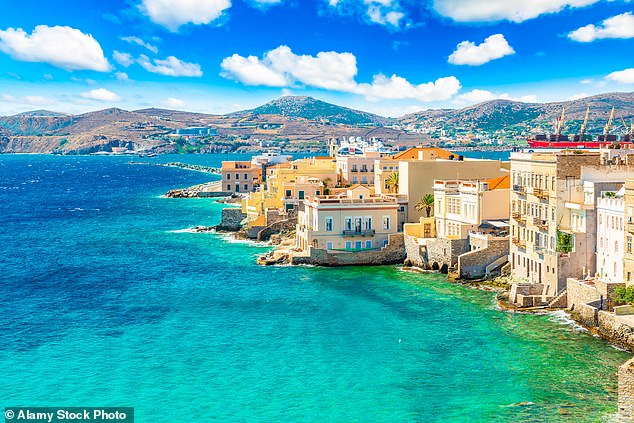 Ermoupoli, pictured, is the capital of Syros, an island of 22,000 souls in the middle of the Cyclades

Italianate Ermoupoli is Syros’s biggest attraction. It was established in the 1820s by refugees from the ravaged islands of Chios, Psara, Kasos and Crete during the Greek War of Independence. They were canny traders and shipbuilders whose industry turned Ermoupoli into the principal Greek port until the rise of Piraeus.

They built stately homes in the prevailing neoclassical style, and decorated churches with heirlooms. One of them turned out to be quite a sensation.

Papa Kostas, the parish priest of the church of the Dormition of the Virgin, is keen to recount the story. ‘It was March 1983, the first day of Lent, and George Mastoropoulos, the archaeologist, was cataloguing the icons brought to Syros.

He was cleaning them carefully until he started jumping around like a child. “Papa Kostas,” he said, “you have a veritable treasure here”.’

What Mastoropoulos had revealed below the grime of the centuries was the signature of El Greco. I look at his Dormition, painted in Cretan style when the master was in his 20s, and I’m glad that it didn’t end up in a faceless museum but remained in the loving care of Papa Kostas.

A quick stroll from the church leads me to the central Miaouli square, dominated by the town hall and its long, monumental stairway.

I continue through streets paved with marble to the Apollo theatre, built in the style of the Teatro San Carlo in Naples.

I pass the church of St Nicholas the Rich, a domed basilica on Corinthian columns, and end up high above the town, on a cove crowned by a string of palazzos. 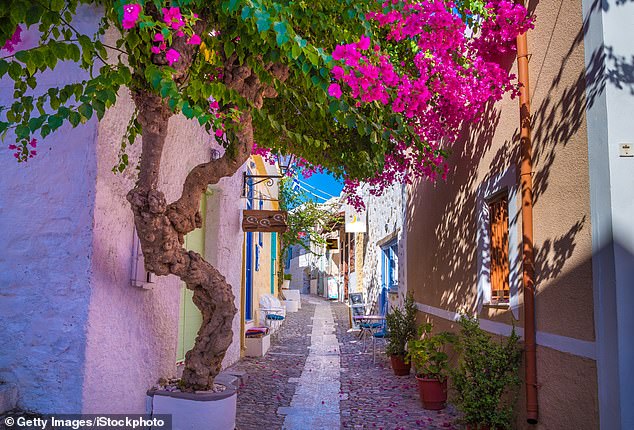 Greek chic: Ano Syros is full of narrow alleys. The medieval town is on a steep hill overlooking the harbour

The next day, I climb up to the medieval town of Ano Syros, on a steep hill overlooking the harbour.

It’s here, in the old capital, that I finally discover those characteristic claustrophobic lanes, pelagic panoramas and white-washed houses.

Once again, Syros ignores the rulebook: the monastery belongs to the Capuchins, while the churches feature organs, polychromatic statues, wooden confessionals and teachings by Pope Francis.

A priest in the Church of St George explains: ‘Ermoupoli is Orthodox, but the rest of Syros is Catholic. The island used to be under the protection of the Pope. Now we celebrate Easter together on the Orthodox dates by special dispensation from the Vatican.’

No surprises, though, when it comes to the beaches. From Ermoupoli a bus runs a circuit of the southern shore, where the sands are toffee-hued and the water transparent. 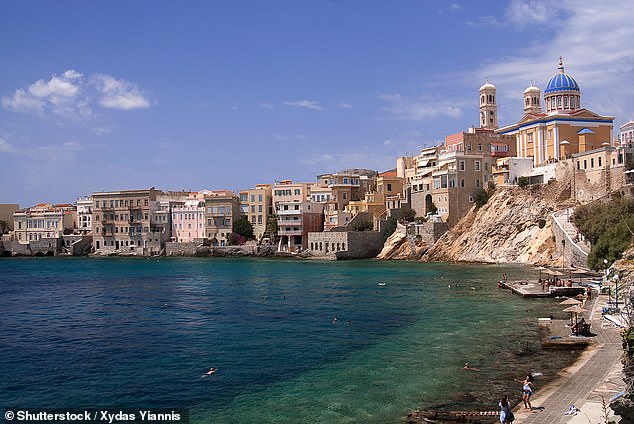 Tourists use Syros, pictured, as a pit stop between Mykonos and Piraeus, the main port of Athens

The most developed resort is the golden crescent of Galissas, where I’m welcomed at the highly celebrated restaurant Iliovasilema. It serves Greek cuisine with a creative twist: sea-urchin salad, fennel flan, beef cheek orzotto.

Another popular resort is Kini, a compact fishing village with a pleasingly quiet harbour, where I board a boat with Syros Adventures for a day trip to the northern beaches.

Our final stop is Grammata, a sheltered bay with iridescent waters. I decide to follow the shore around a rocky promontory where shipwrecked sailors have carved messages of gratitude since ancient times.

Not dressed for hiking, I slip and wreck my flip flops — a disaster, as I’m left barefoot on sharp rocks. A Greek couple on a sailing boat spot my predicament and throw me a pair of sandals — that miraculously fit — so I can complete my walk. ‘Keep them,’ they shout, refusing my offers of money. ‘It’s you who needs them.’

So that’s how I remember Syros. Idiosyncratic and eccentric the island may be, but its soul belongs to an old-fashioned Greece where acts of generosity to strangers are still part of daily life.

John travelled with Sunvil (sunvil.co.uk), which offers seven nights’ B&B in Ermoupoli from £898pp, including flights from London to Mykonos and ferry transfers. See visitsyros.com/en.