Step into a Greek odyssey: The little-known Pelion peninsula makes for a challenging hike – but the rewards are out of this world

The stupidity of not buying a proper pair of walking boots becomes apparent during our first day of hiking seven miles through undergrowth and fording mountain streams.

But this is offset by the pleasure of having chosen the Pelion peninsula as the place to take a ‘long walk for freedom’ after months of UK lockdown.

Pelion is not on Greece’s list of major tourist destinations and it is all the better for it. Forget expensive cocktails and umbrella-covered sun loungers. Our walk is all about unspoilt landscapes, hilltop villages and quiet tavernas where the clientele speak little English. 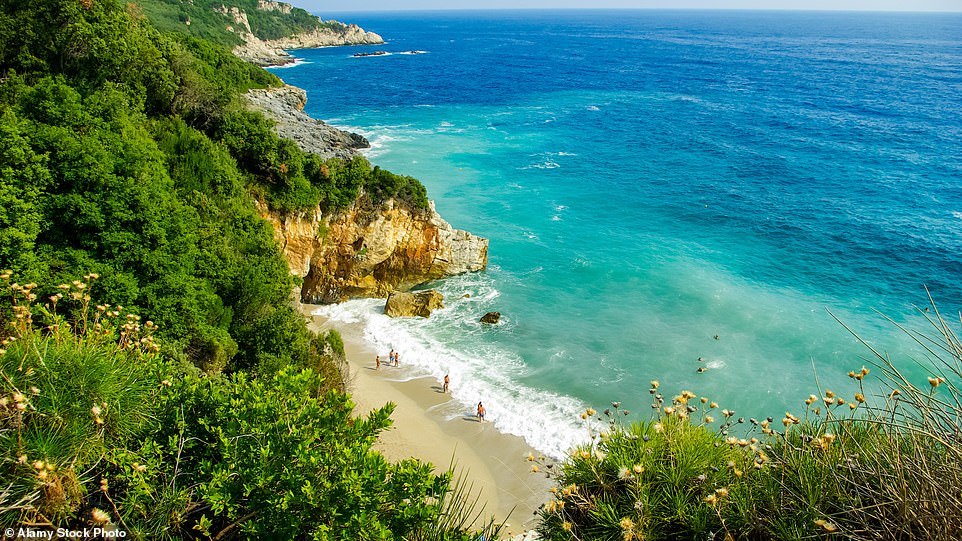 Thrilling: Pelion is not on Greece’s list of major tourist destinations and it is ‘all the better for it’, says Tim Bouverie. Pictured is one of its secluded coves

Mind you, getting here isn’t that easy, requiring a flight to Thessaloniki or Athens, then a three or four-hour coach journey to the port city of Volos.

From there, my friend Chris and I get a taxi to the village of Portaria. It’s a 20-minute drive into the mountains.

The travel company Macs Adventure has arranged our trip (yes, I really did just type ‘adventure holidays’ into a search engine), which includes transferring our luggage between hotels and providing us with route notes for each day’s walk.

Despite the latter, a fatal combination of overconfidence (I am seized by the delusion that I am a born explorer) and poor map-reading causes us to set off in the opposite direction to that in which we should be heading. Fortunately, we realise my mistake before too long and are soon ascending the right mountain via kalderimia — old mule paths, now overgrown and in many places broken.

The scenery is varied and evocative. Traversing the coastal cliffs, you feel as if you could be in the ancient world, with Achilles and a troop of Myrmidons about to appear.

At other moments, deep in beech forests, you half expect to see Mr Tumnus trotting round the corner. 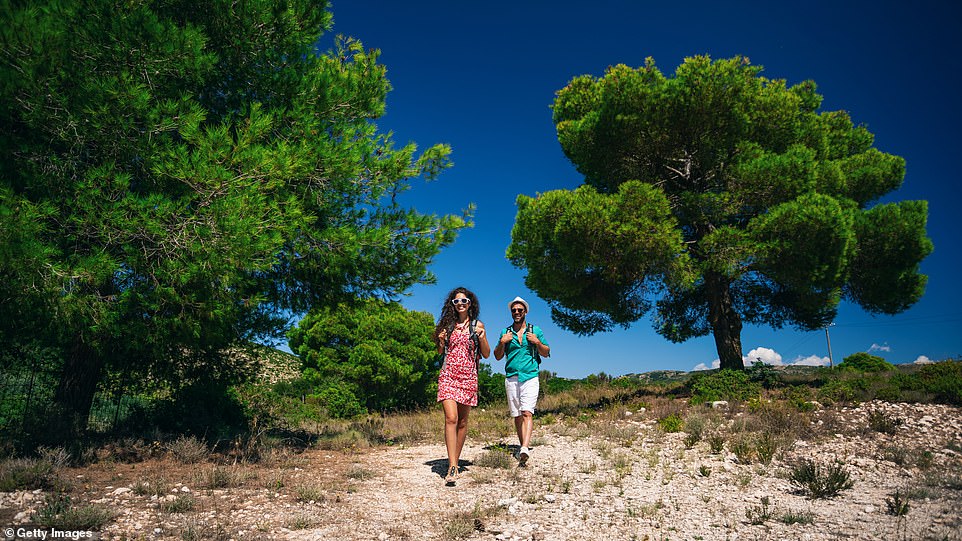 Narnia is the theme of our first stop: the village of Chania, near the top of Mount Pelion. The forest, descending from the terrace of the Hotel Manthos, spreads out like a green carpet to the sea, while swallows patrol the sky above.

The only other guests are an entire Greek football team, who have come to train in the cool mountain air. Both they and the hotel staff seem to think us a little eccentric. My friend and I are not seasoned walkers and have made too little effort to acquire sensible kit.

Chris, a high-powered financier, has brought along a collection of City shirts, while I am wearing the sort of shorts that might have been worn by Dr Livingstone.

But lack of sartorial elegance is the least of my problems. I was certain before we set out that a well-worn pair of Converse trainers would suffice as footwear, but am horrified to discover that they offer neither enough grip nor support. After only one day of walking, my legs are covered in cuts and grazes.

Some of these are due to stumbles, others because half the kalderimia have been overwhelmed by vegetation. Maybe, because of Covid, no one has walked them this year. Or maybe they are always like this? 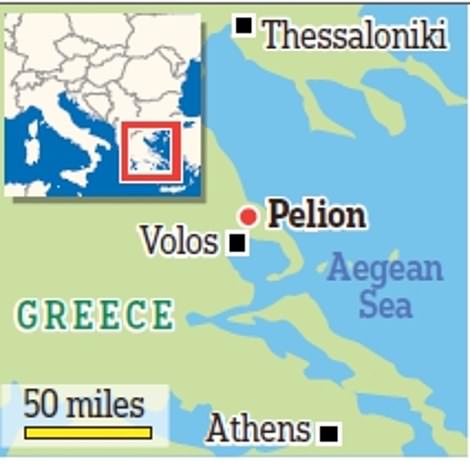 To get to Pelion you have to take a flight to Thessaloniki or Athens, then a three or four-hour coach journey to the port city of Volos

‘Of course this is a path!’ I assert, before fighting my way through a thicket of bracken to a dead end.

But there are compensations later. The beaches of Agios Ioannis are beautifully clear, fronted by a succession of tavernas. Chris, desperate to check the financial markets (his mobile phone is a constant feature on our walks), is delighted by the hotel wi-fi, while I provide a bit of visual contrast on the beach — a pallid interloper surrounded by bronzed Greeks.

The next day we walk south along the coast, stopping at two of the best beaches I have ever visited in Greece — Damouchari and Fakistra. In between these two, poor reading of the directions (again) causes us to accidentally climb a hill that must surely be known locally as the Greek Matterhorn. Our night is spent in the wonderfully quirky Lost Unicorn Hotel in Tsagarada. This early 19th-century building is full of telescopes, books and prints, while outside you can take tea or drinks in the hotel’s own treehouse.

Trees are special in Pelion. The beeches, nourished by mountain springs, stretch high into the clouds, while clusters of chestnuts give way to fruit groves the farther you descend. Most extraordinary, however, are the plane trees, the most important of which are revered in village squares.

You may not be a tree person but I defy you not to be impressed by the giant plane tree in front of the church in Agia Paraskevi. It is more than a thousand years old and about 58 ft in circumference, the sort of natural wonder that lends credence to the legend that Pelion was favoured by the gods.

And so on to the village of Milies for our final night. By this stage my blisters are less of a problem than the fact that my knees no longer seem to be functioning. Blaming my inadequate footwear rather than lack of fitness, I struggle on — and soon the prospect of a lunch of Pelion sausage in peppers and aubergine and a Mythos beer has lubricated my joints.

I feel both lucky and glad that these five days are to be followed by a few doing very little on the island of Kythnos in the Cyclades.

But Pelion has been a revelation: one of the most beguiling places I have ever visited, and proof that I can survive a walking holiday.

With proper boots, I would do it all again.