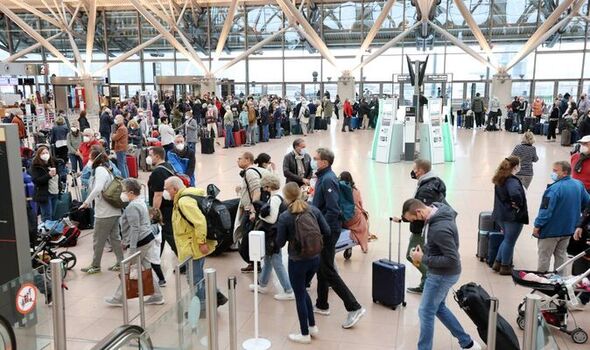 Consumer watchdog Which? says the proposed reforms would see payouts for disrupted journeys slashed by £163 per passenger – from £220 per to just £57. That means the airlines could save tens of thousands of pounds in compensation on a single flight.

And Which? fears the cheaper payouts could “embolden airlines to act with impunity” – leading to more disruption at the airports.

Under current EU261 rules, someone on a domestic flight in the UK can claim £220 once their flight has been delayed by three hours.

The Government is considering scrapping this in favour of offering compensation based on ticket price and the length of delay – similar to the railways’ Delay Repay system.

A Department for Transport (DFT) consultation is due to end on Sunday.

Which? used data from online travel agents Skyscanner to calculate how much airlines would save in payouts for long delays on some of the most popular UK routes.

At the moment an airline would have to pay £39,600 to passengers on full flights delayed by three hours or more from Gatwick to Belfast or from Edinburgh to London.

But under the Government’s proposed scheme, the maximum total payout on the flight to Belfast would be reduced to £9,900.

And the most it would have to repay to people on the London flight, would be slashed to just £7,920 because tickets for that journey are slightly cheaper.

Which? fears reducing compensation payments will remove a significant deterrent against airlines letting passengers down.

It also says switching to a system similar to that used by the rail industry would be unfair on passengers – as cancelled flights can also mean cancelled holidays, which would be far more costly than missing a train.

And it warns the changes could disproportionately affect those living in the devolved nations and other regions of the UK, where people are more likely to take domestic flights.

Which? is urging the Government to instead increase enforcement in a market which has seen persistent lawbreaking by airlines over many years.

It backs separate proposals in the same DFT consultation to grant fining powers to the Civil Aviation Authority and make it mandatory for airlines to join the Alternative Disputes Resolution scheme.

It is also calling for the introduction of a statutory-backed aviation ombudsman.

Rory Boland, editor of Which? Travel, said: “Ripping up compensation rules would be a huge blow for passenger rights and embolden airlines to act with impunity.

“Unfair practices, such as overbooking and denied boarding, could once again become commonplace if this essential deterrent is removed, leaving passengers out of pocket.

“The Government should…give passengers confidence that they will be protected when their journey is disrupted by giving the aviation regulator the powers it needs to crack down on airlines flouting the rules.”