Discover the delights of autumn breaks based on boats, trains and bikes (or just a sun lounger and a glass of wine) as we serve up… our dozen French fancies

For those not tied to school holidays, a September trip to France means far fewer tourists and still pleasantly warm weather.

So with Covid restrictions now eased for the fully vaccinated, you can head off for fun in the sun on the Riviera, or escape for a quick mini-break across the Channel.

PUTTER DOWN THE CANAL 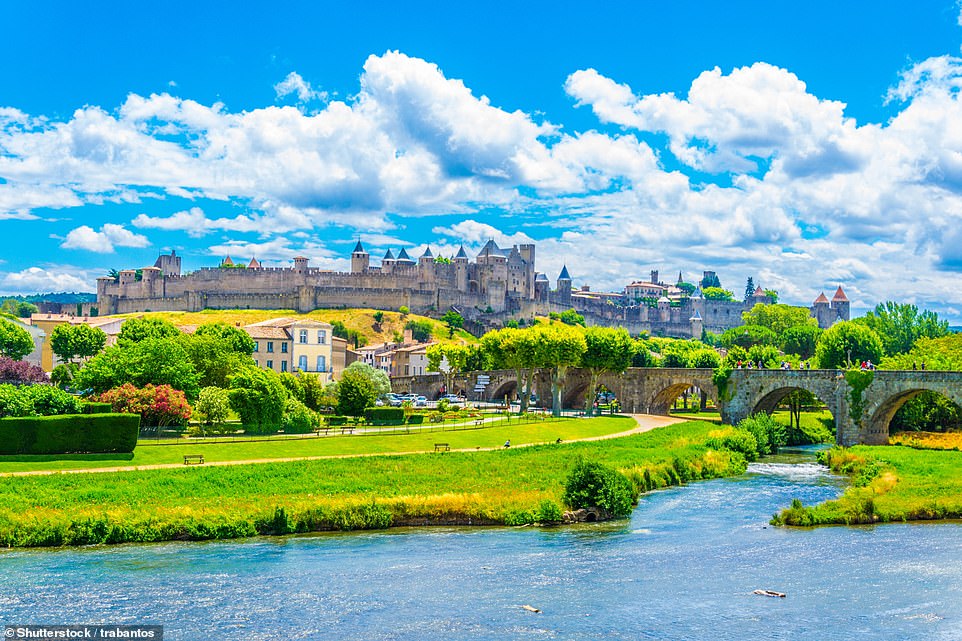 Medieval majesty: Those travelling down the Canal du Midi can stop off at the walled town of Carcassonne, pictured

Running from Toulouse down to the Mediterranean coast, the Canal du Midi is one of Europe’s most beautiful waterways, with cathedrals, castles and ancient ruins along its route. Pick the part you want to putter down (maximum speed is 6mph) and let life slow down as you glide past vineyards and villages. One of the best sections is from Castelnaudary, where you can try the local speciality of cassoulet (a meat and bean stew) to the medieval city of Carcassonne, with its fortified citadel within the ramparts, plus a castle and cathedral. Better still, tour firm Le Boat has 20 per cent off trips in its comfortable self-drive craft this year.

A week’s self catering starting and finishing in Castelnaudary from £1,119 per boat for six (leboat.co.uk). Flights to Toulouse extra. 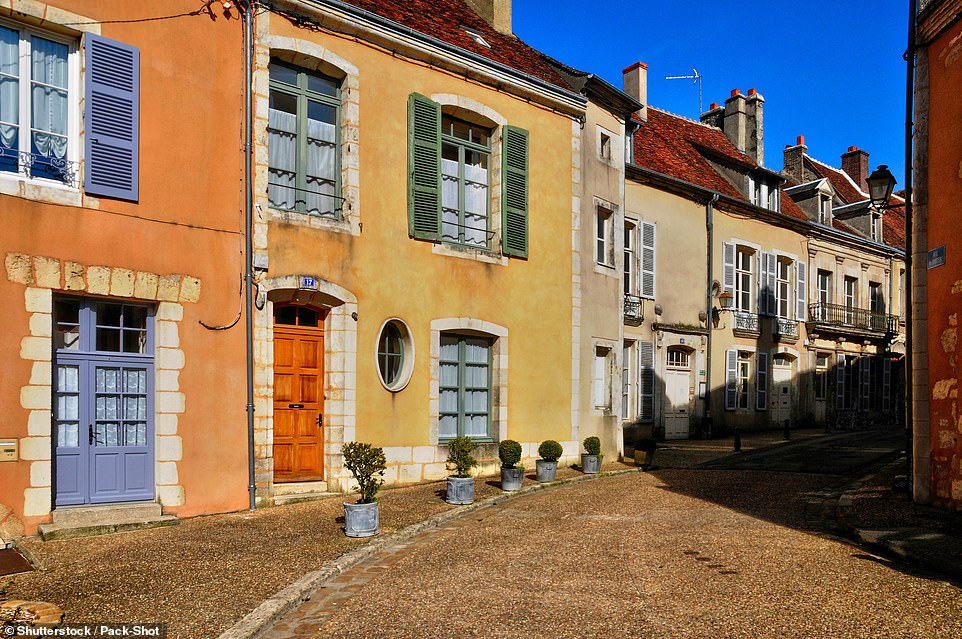 Jane Knight recommends hunting for antiques in the ‘chi-chi’ town of Belleme, in the boho area of the Perche Ornais

If you have time only for a long weekend or a few days away, look no further than the little-known boho area of the Perche Ornais, where Parisians spend their weekends. A boutique hotel has just opened in the quaint village of La Perriere, built on a spur with views over the surrounding countryside. The Relais d’Horbe has a gourmet restaurant and deli as well as seven rooms, with beamed ceilings, wooden floors and minimalist furniture within original stone walls. Next door is the Maison d’Horbe, an old curiosity shop whose interior is filled with cabinets bursting with knick-knacks, and where you can dine among the antiques for sale. Visit the more chi-chi town of Belleme for more antiques, or explore the forest.

Rooms at Relais d’Horbe cost from £80, breakfast £8.50pp (lerelaisdhorbe.fr). Ferry crossings to Caen or Cherbourg from £122pp with car (brittanyferries.com). 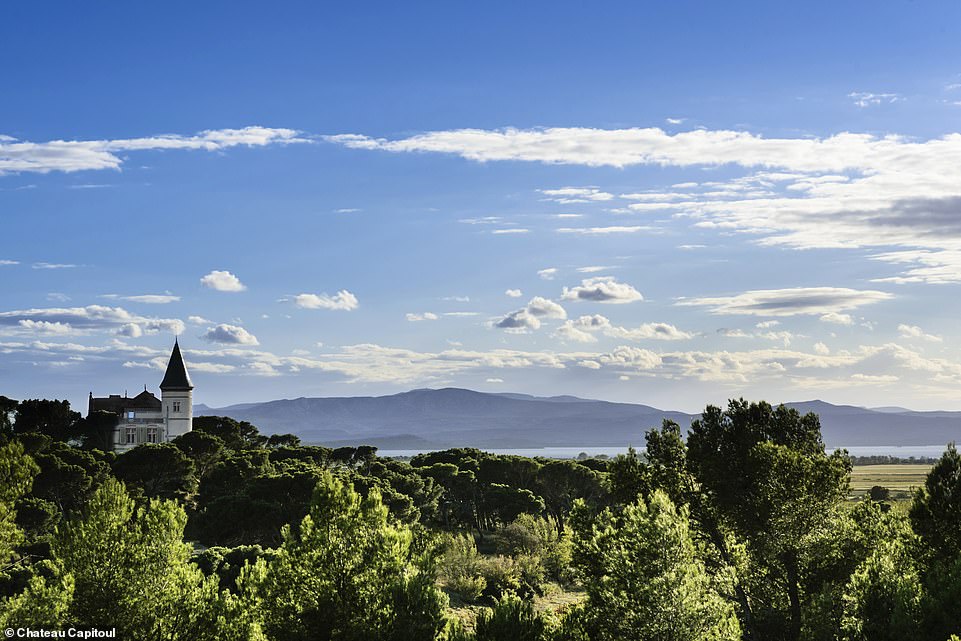 Chateau Capitoul, pictured, can be found on the Massif de la Clape nature reserve, which has its own wine appellation 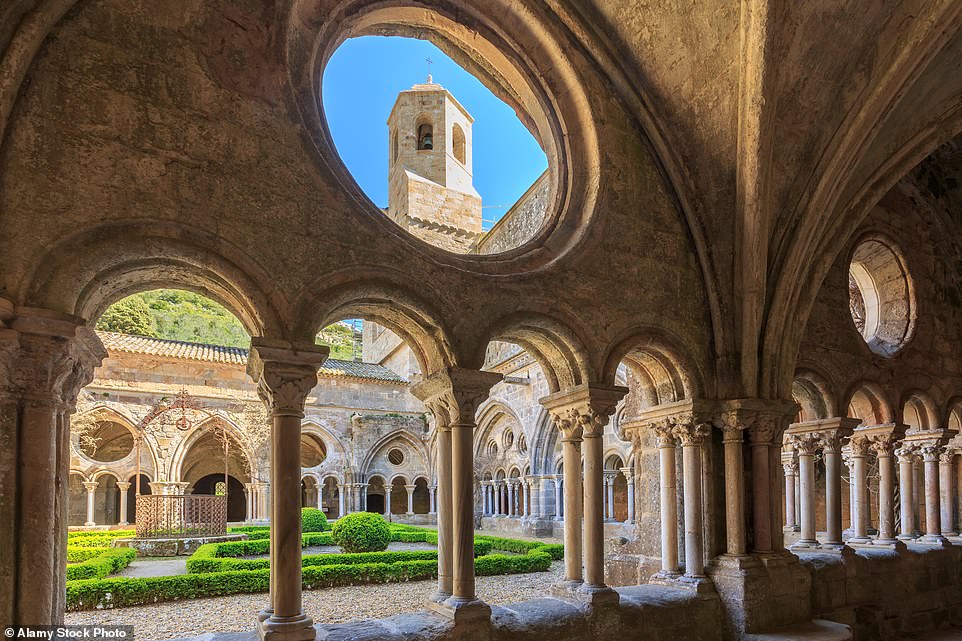 The Roman city of Narbonne is along the ‘little-known part of the Mediterranean coast’, says Jane. Pictured is the city’s Fontfroide Abbey

Opening in time for the grape harvest is the Chateau Capitoul, where you can gaze out at Languedoc and rows of vines from an elegant self-catering villa with pool, then toast the introductory offer of three nights for the price of two in the winery. It’s on the Massif de la Clape nature reserve, which has both its own wine appellation and a network of hiking and cycling trails, so you can explore this little-known part of the Mediterranean coast which includes the Roman city of Narbonne, with Fontfroide Abbey, or just enjoy the hotel’s Cinq Mondes spa before wining and dining in the restaurant. 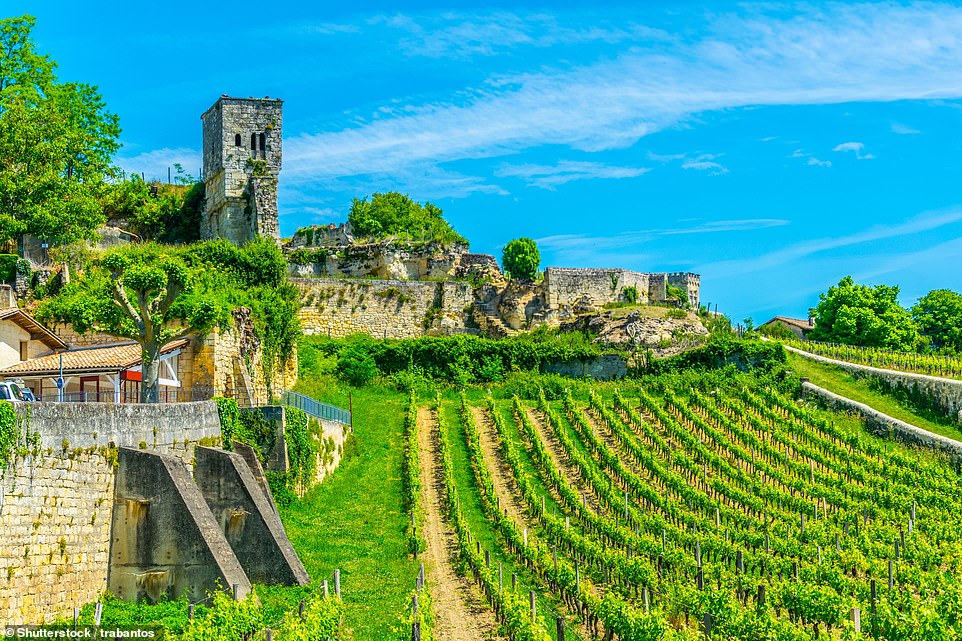 One of the Uniworld river cruises stops at medieval St Emilion, which is known for its vineyards and wine-tastings

Choose a Uniworld river cruise and you’ll find that everything is included, from on-board drinks to excursions and tips. That normally makes them pretty pricey, but if you book before the end of August you’ll get half-price deals on certain sailings, including the one along the Garonne, Dordogne and Gironde rivers. Stops en route will allow you to cycle through a Medoc vineyard, walk and wine-taste your way round medieval St Emilion, and discover Bordeaux’s Cite du Vin museum.

But it’s not just about wine: you can take a yoga class in the heart of the fortress of Blaye and find out more about artist Henri de Toulouse-Lautrec at his mother’s home at Chateau Malrome and at Verdelais, where he is buried. Back aboard SS Bon Voyage, with its on-deck pool, there’s a bar inspired by Yves Saint Laurent’s Marrakech home, Villa Majorelle, and a brasserie and formal restaurant serving local specialities.

Week-long cruises in September and October from £1,749pp with flights from Heathrow (uniworld.com). 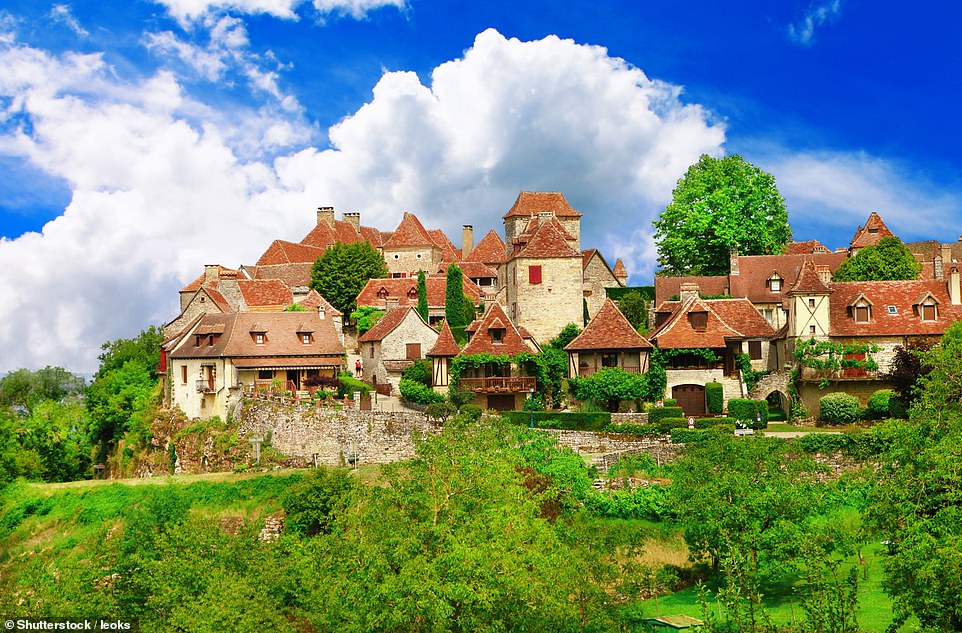 Passengers take port in the picturesque village of Loubressac, above, during a seven-night trip along the Dordogne

The Dordogne buzzes with tourists in summer, but by September it’s much calmer, particularly along the upper reaches of the river. Hike between charming villages with turrets and half-timbered houses, then sit down without a guilty conscience in the evening to devour dishes featuring the region’s duck, wild mushrooms, walnuts and goats cheese. The seven-night trip starts at Beaulieu and takes in Port de Gagnac, Loubressac and La Vaysse, stopping at hotels such as the charismatic Auberge du Vieux Port, overlooking the River Cere. 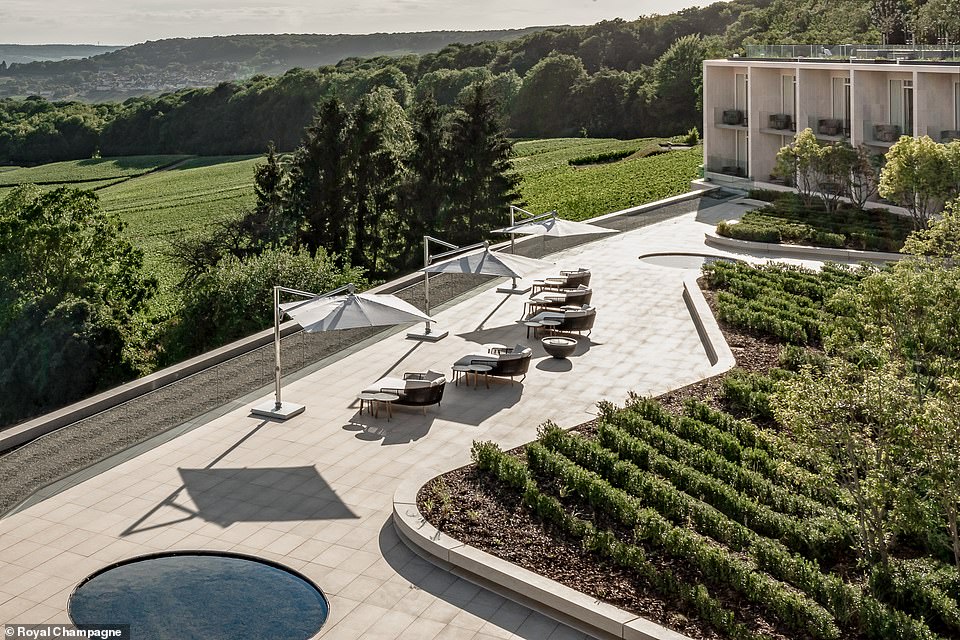 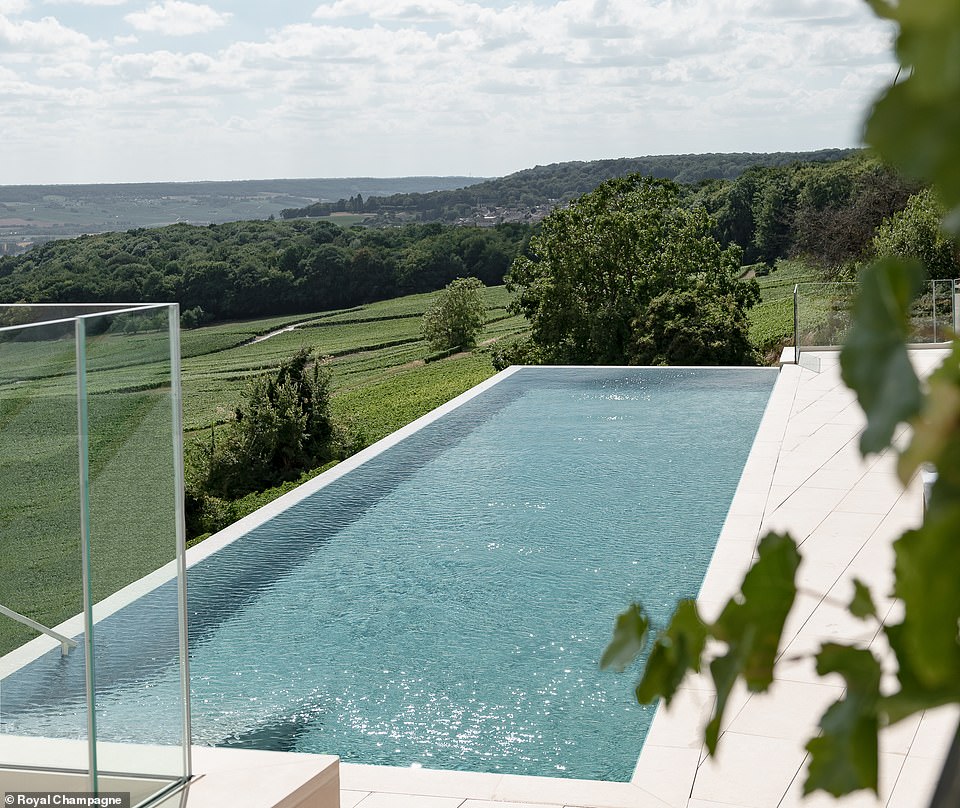 Rooms in the hotel, which hosts tasting sessions with local champagne producers, start from £340 per night

Celebrate the return of travel in style, in the home of bubbles, Champagne. Here, the Royal Champagne hotel just outside Epernay makes a luxurious base from which to explore. The hotel has a champagne concierge who can arrange access to private champagne houses, as well as tasting and harvesting sessions with local producers. Hire an e-bike and ride to Hautvillers to see the tomb of Dom Perignon, who was instrumental in champagne’s rise to fame, then return to the hotel spa for vineyard views and luxury treatments.

Rooms from £340 a night (royalchampagne.com). The hotel is a two-and-a-half-hour drive from Calais. Alternatively book three nights’ B&B with flights from £1,055pp (inspiringtravelcompany.co.uk).

SADDLE UP IN THE LOIRE 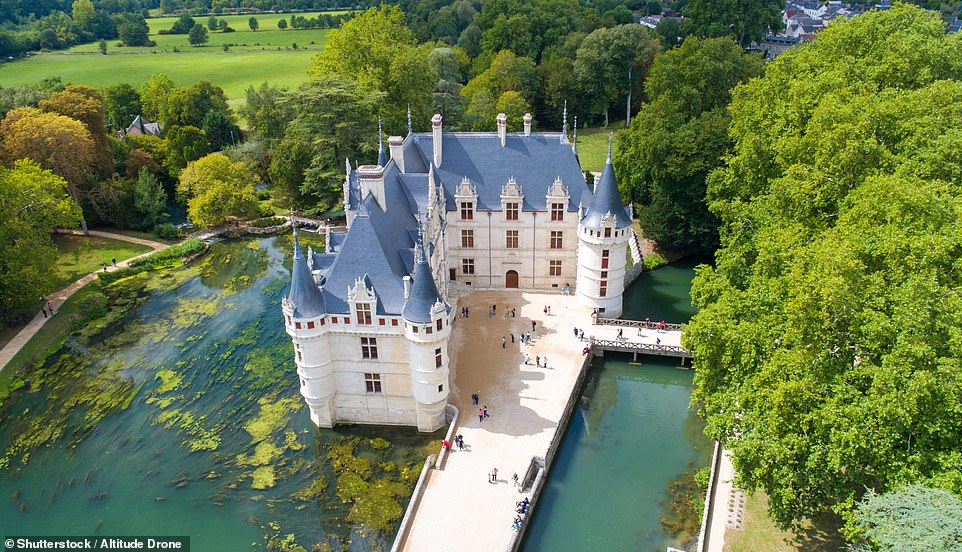 The beauty of the Loire – apart from the historic chateaux scattered along the river – is that the surrounding countryside is pretty flat, making cycling a relative doddle. Follow the network of well-marked, well-maintained cycle routes and quiet roads, taking in the fairytale Chateau d’Azay-le-Rideau or the glorious gardens of the Chateau de Villandry.

Luggage is transported for you to hotels along the way, including the 19th Century Chateau de Vernieres near Saumur, conveniently located near the vineyards. Wine-lovers, history buffs and foodies who don’t feel up to pedalling can follow an e-bike itinerary. 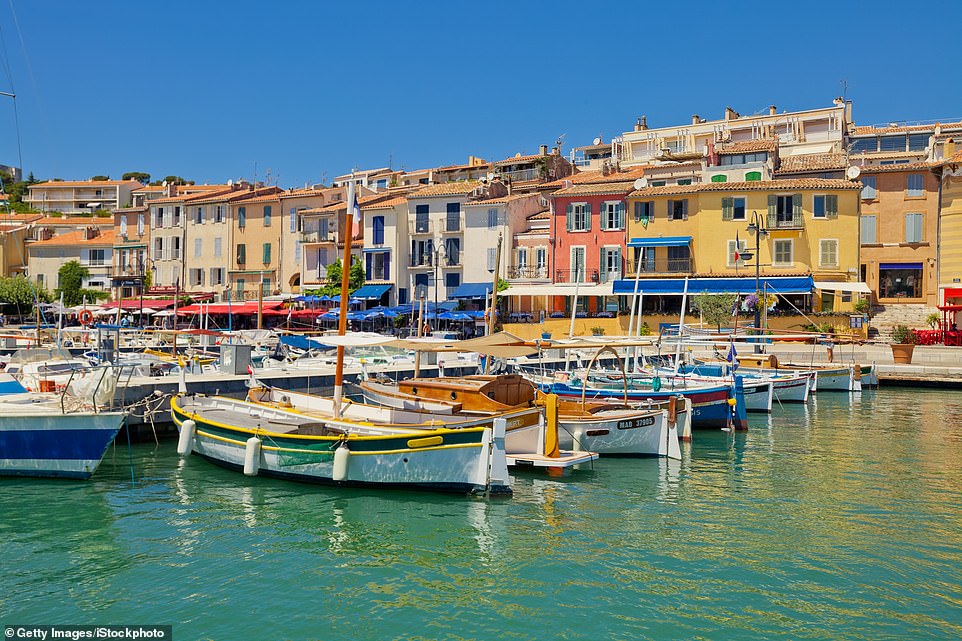 Vibrant vibe: The jolly harbour at Cassis is worth seeing on a day-trip from Marseille

A Grand Tour de France by train, taking in Lyons, Marseille and Bordeaux, is just the ticket – and it’s first class all the way. Three nights in four-star hotels are included in each city, bookended by a night in Lille on the way out and in Paris on the return. In the gastronomic capital of Lyons, there’s plenty of superb food, and history.

Take the funicular from the cathedral with its astronomical clock up the hill to see the Basilique Notre Dame de Fourviere and the remains of the Gallo-Roman city of Lugdunum. From Marseille, take day-trips to the port of Cassis or follow coastal tracks to tiny coves before moving to Bordeaux, with its wines and neoclassical grandeur.

TAKE THE WATER AT EVIAN 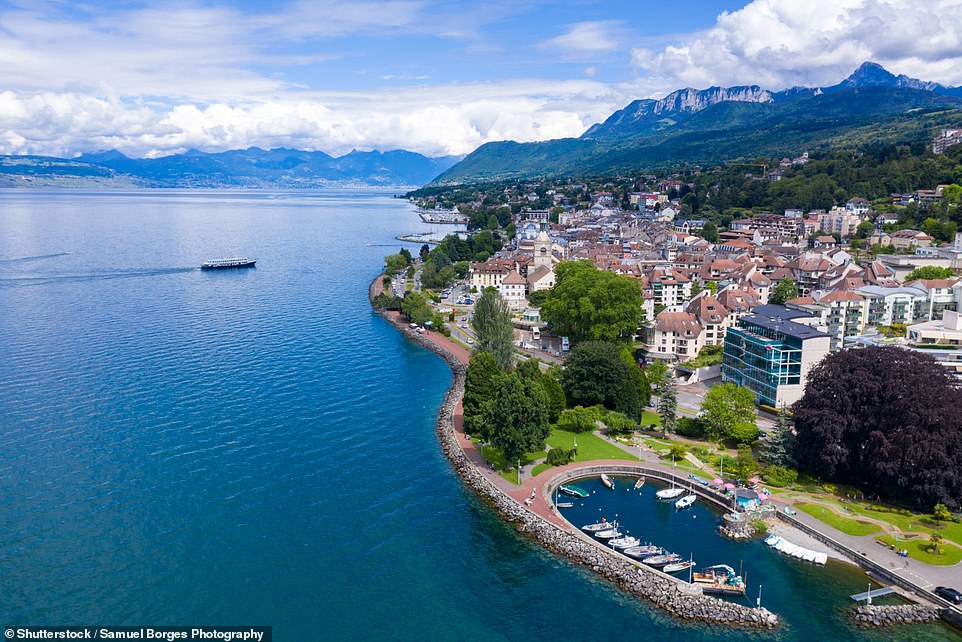 The spa town of Evian-les-Bains, pictured, is an ideal base for holidaying walkers and cyclists 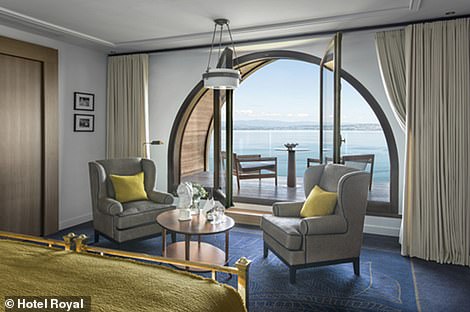 You know the water will be top-quality at the spa town of Evian-les-Bains, but the food is pretty good too – the resort has a Michelin-starred restaurant, Les Fresques. Take cookery lessons with chef Patrice Vander, or improve your game of golf with tuition from former world pros at the David Leadbetter Golf Academy.

In the mountains a 40-minute drive from Geneva airport, the resort makes a great base for walkers and cyclists. Stay in either the smart Hotel Royal or the more family-friendly Hotel Ermitage.

Rooms from £255 at Hotel Royal or from £148 at Hotel Ermitage (evianresort.com). Three nights’ B&B at Hotel Royal with a half-day wellness option, a dinner at Les Fresques and three adventure day-trips, with flights from Gatwick, from £1,975pp (azurecollection.com). 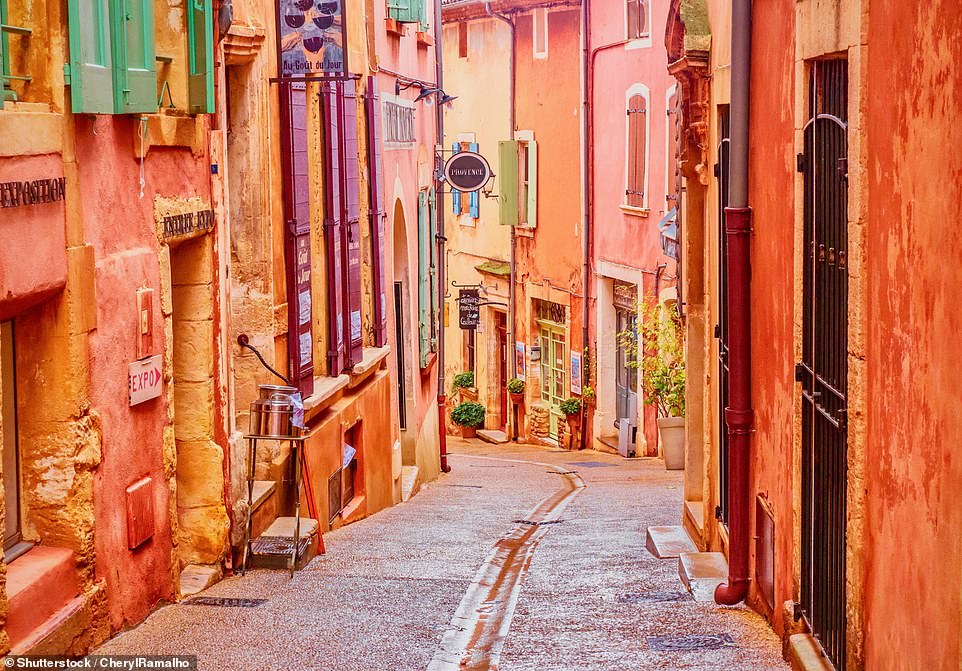 Jane recommends travellers stop to witness the ‘explosion of colour’ in the village of Roussillon, pictured, during a trip to Luberon

The Luberon – dubbed the heart of Provence – sizzles in September. Visit the little village of Lacoste, once the home of the Marquis de Sade, and take in the explosion of colour at Roussillon, which makes you feel you’re in Australia’s red centre. Stay surrounded by vineyards and lavender fields at Coquillade Provence Resort & Spa. Depending on your interests, you can take bike tours into the surrounding hills – experienced cyclists can even try the Mont Ventoux climb, which challenges riders in the Tour de France – or book a wine experience, viewing the 17th Century wine cellar at Chateau Constantin and sampling organic wines at the Chateau de Mille.

Five nights’ B&B with flights from Gatwick to Marseilles and transfers from £930pp (seventytentravel.com). The guided ascent of Mont Ventoux costs €450pp, wine touring from £85pp.

PICK GRAPES… IN THE ALPS 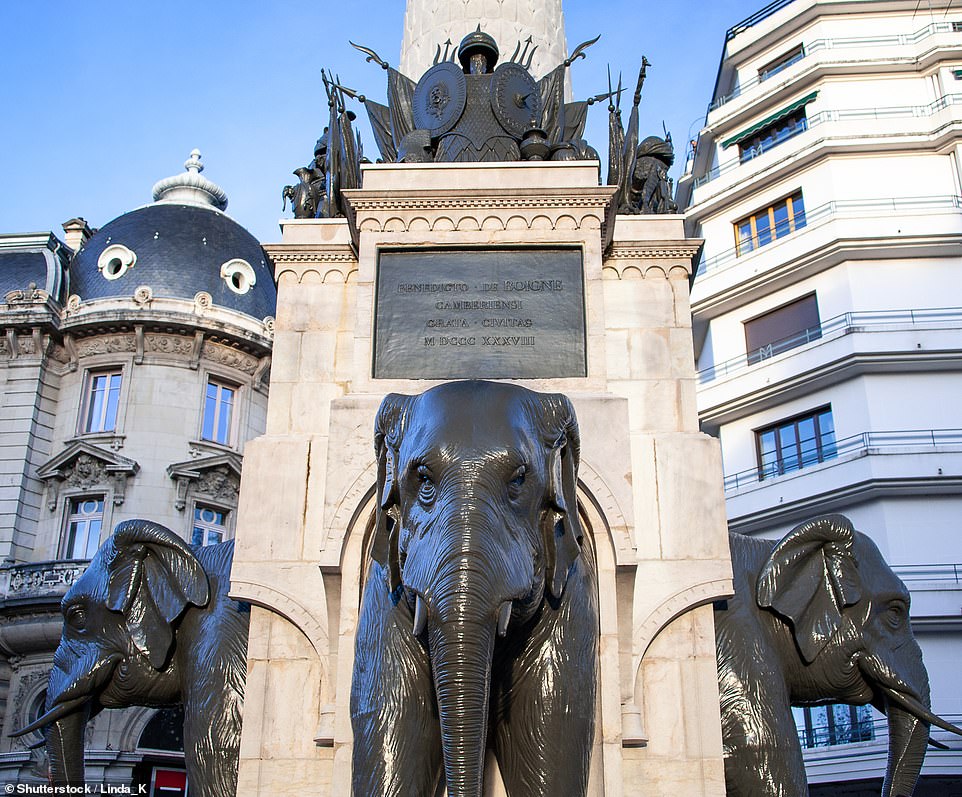 It may be in the Alps, but the 14th Century Chateau de Candie near Chambery grows its own grapes to make viognier white wine. At harvest time, towards the end of September, join hotel staff and locals who pick the grapes, or just sample the results of their efforts from previous harvests.

Check out the Fontaine des Elephants in the town centre, featuring elephants carved in stone, as well as the impressive Chateau des Ducs de Savoie, or venture further afield to Aix-les-Bains for hot springs, Roman remains and a lakeside esplanade lined with plane trees.

A week’s B&B in a two-bedroom suite for four costs from £472pp (skifrance.co.uk). Flights extra. 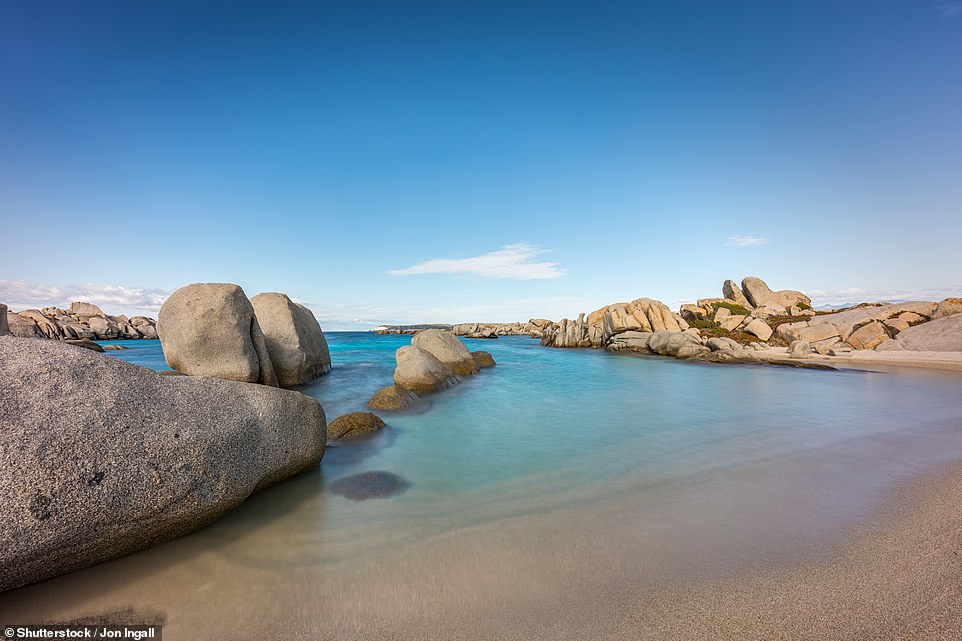 Really get away from it all on the little island of Cavallo in the Lavezzi archipelago, between Corsica and Sardinia. Here there are no cars, so you take golf buggies to the white-sand beaches lapped by azure seas.

As well as a number of privately owned villas, there is a single hotel, the Hotel des Pecheurs, and it’s seriously lovely. Built from local stone and decked out in blue and white, its rooms and suites are clustered by the water’s edge, where the scenery is like something from the Seychelles. A restaurant on the jetty serves the best of French and Italian food.

A week’s B&B from £1,719pp with flights and transfers (redsavannah.com).