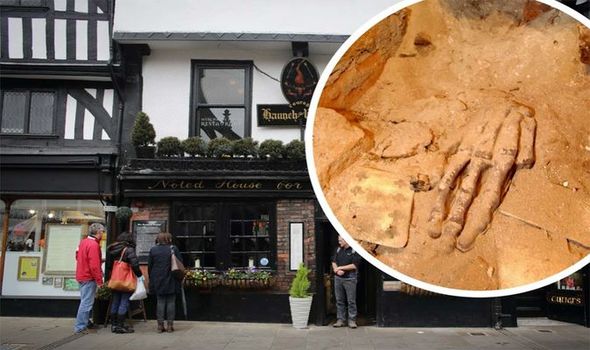 The Haunch of Venison, in Salisbury, is one of the city’s oldest buildings in the region, first recorded around 1320. And with age comes history – 700 years worth – with many people reporting that the boozer is haunted, including the owners themselves, who state so on the pub’s website.

There have been tales of knives standing on end and pints of ale smashing to the ground, as well as former landlords and landladies having seen a man in a brown shirt and braces watching them sleep, Wiltshire Live reported.

The 14th century building was originally used as a church house when St Thomas’ spire was being built, and is believed to have later been used as a brothel.

The boozer features three small bars, known as the Horsebox, Death Row and the House of Lords.

Under a fireplace in the Haunch, a disused bread oven is home to a smoke preserved mummified hand, chopped from the arm of an 18th century gambler who got caught cheating at a game of cards – so the story goes.

The pub is said to be haunted by the spirit of a ‘Demended Whist Player’ – a man who won a large sum of cash whilst playing cards in the 1820s.

As locals thought he was cheating, a butcher chopped off his hand, which is thought to be the mummified hand located in the bar.

The unusual relic was discovered when the Salisbury pub was renovated in 1911.

It was stolen from its display case in 2004, but was secretly returned a few weeks later, before it was taken again in 2010.

The severed hand is now securely locked – but still attracts swaths of people, including school children, to take a look at it.

Pub punter Ruby Vitorino Moody spent six years writing a book documenting the Haunch’s many tales of the supernatural and its wider history, called The A-Z of the Haunch of Venison.

As well as the hauntings, the Horsebox bar is said to have hosted Winston Churchill and Dwight Eisenhower, where they apparently discussed preparations for the D-Day landings.

Recommended by the CAMRA Good Pub Guide for 28 years running, the Haunch of Venison is home so several interesting and historical features, such as tiles from Salisbury Cathedral purchased in the 1700s for just £3, as well as a pewter top bar – one of just six in the whole country.

Owners of the pub said: “There is a rare wooden carved elevated arch with seven origin gravity-fed spirit taps fitted in 1909. According to CAMRA there are only five of them left in the United Kingdom.

“There are no dispensers on the counter and hand pumps are affixed to the bar back-fitting, which also has drawers – very rare as well.”

Keep up to date with all our 2Chill-related news by following our social pages. As well as videos, tips and advice, we’ll also be sharing some dreamy places where you can Eat, Drink, Do & Chill.