Submerge yourself in history: Haunting pictures show some of the 6,000 shipwrecks that lie in North America’s Great Lakes

North America’s Great Lakes are a recreational mecca, offering all manner of watersports and scenic cruises.

They’re also a gigantic graveyard – of shipwrecks, with these mesmerising, haunting photographs showing some of the 6,000 or so that lie in lakes Superior, Huron, Michigan, Erie and Ontario, which collectively cover an area larger than the entire UK and Ireland put together. 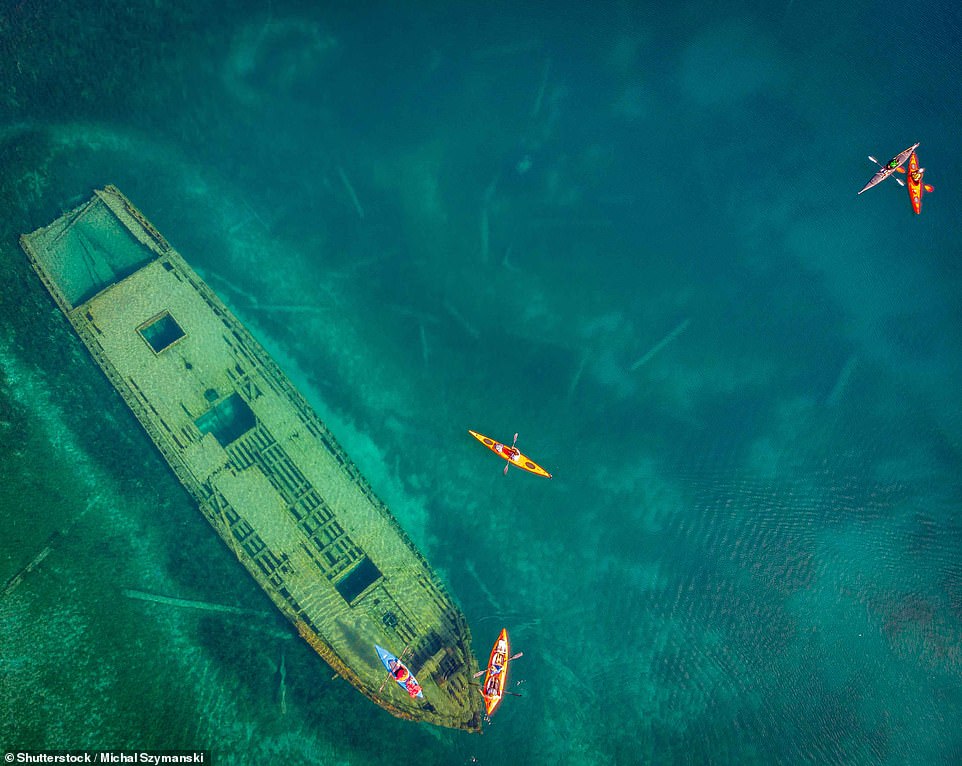 Lake Huron – the fifth-largest freshwater lake in the world – stretches from the state of Michigan in the US over the border into Ontario, Canada. This wreck, near Tobermory on the Bruce peninsula in Ontario, can be clearly seen through the crystal-clear waters 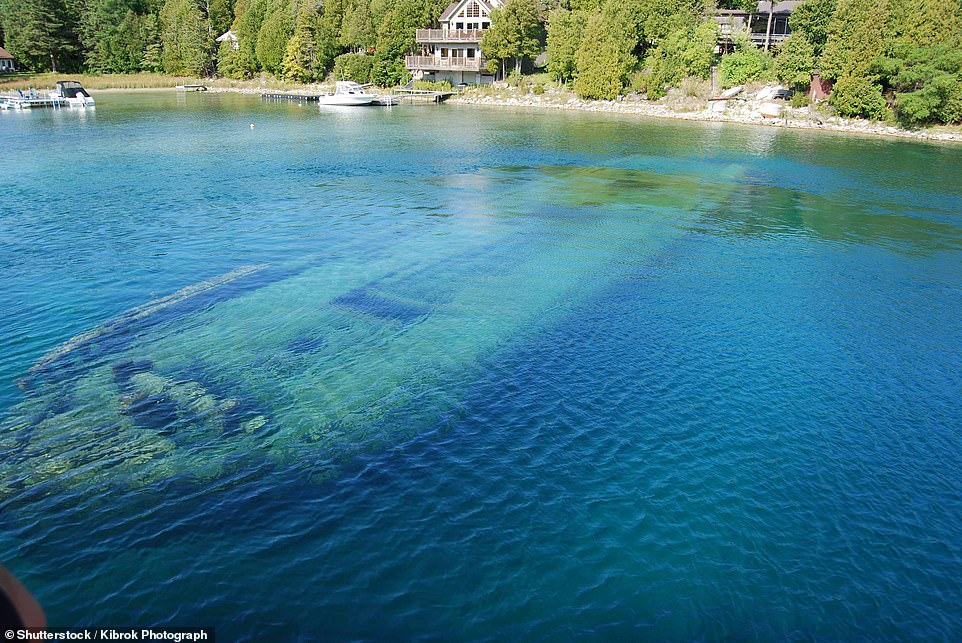 The wreck, which lies in the Fathom Five National Marine Park, is popular with divers and snorkellers

In these pictures the lakes look invitingly placid, but would-be mariners should note that they are prone to sudden and savage storms, and harbour hidden reefs and rocks.

Remarkably, hundreds of shipwrecks remain undiscovered, according to the Great Lakes Shipwreck Museum.

It says: ‘Shipwrecks are true time capsules that not only provoke our imagination – shipwrecks contain real artifacts from another time, unexpectedly snatched from the surface world by the forces of nature.

‘No one, at the time of a shipwreck, had time to prepare it for future discovery.’ 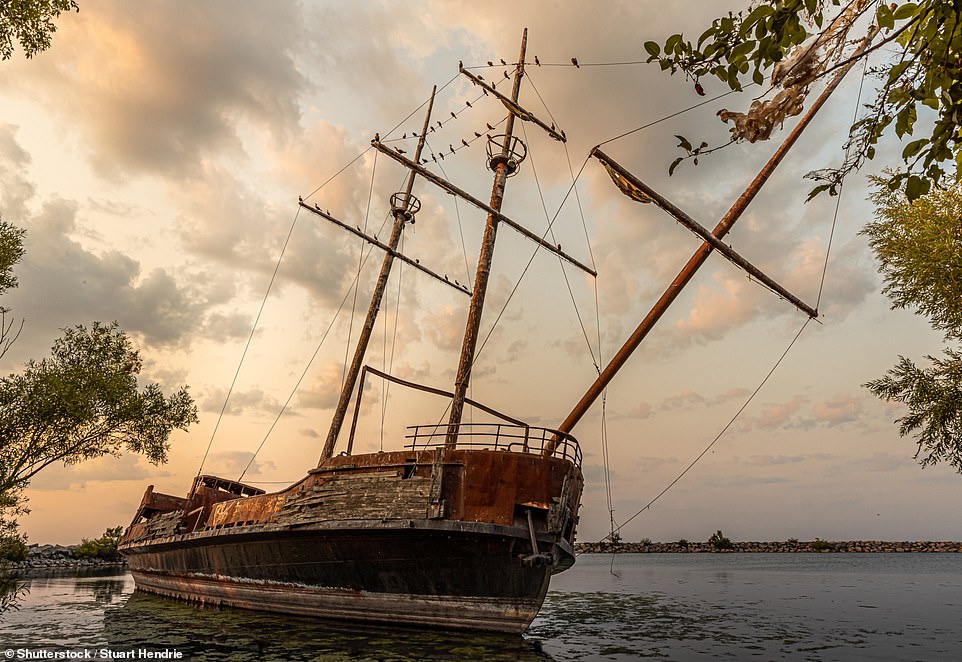 Lakes Superior, Huron, Michigan, Erie and Ontario collectively cover an area larger than the entire UK and Ireland put together. Pictured is a wreck in Jordan Harbour in Lake Ontario 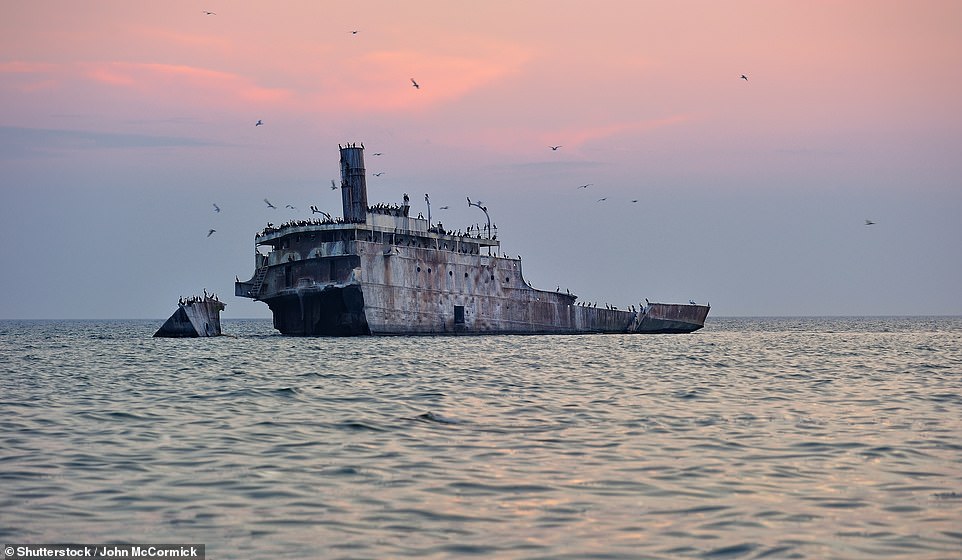 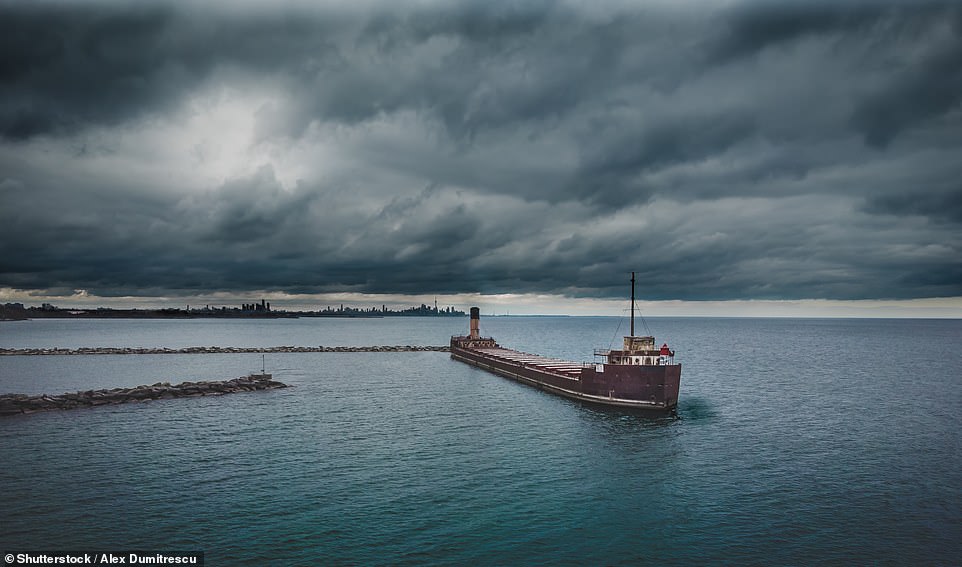 An abandoned ship in Lake Ontario, the smallest of the Great Lakes

Some areas contain high concentrations of wrecks, these include Lake Superior’s ‘Shipwreck Coast’, which the Great Lakes Shipwreck Museum describes as a ‘treacherous stretch of shoreline with no safe harbor between Munising, Michigan, and Whitefish Point’. The famous Edmund Fitzgerald lies just 15 miles to the northwest of Whitefish Point, it adds.

Fathom Five National Marine Park in the Canadian side of Lake Huron, meanwhile, contains over 20 historical wrecks, most of which can be explored by snorkellers and divers.

And the 448-square-mile Thunder Bay National Marine Sanctuary in the American side of Huron is home to over 70 wrecks, earning it the nickname Shipwreck Alley. 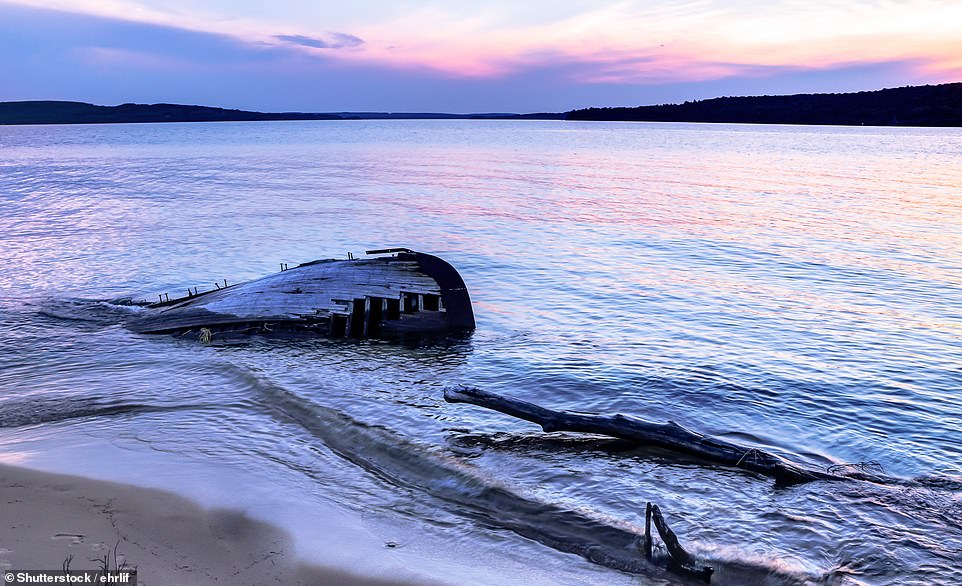 A shipwreck on a remote Lake Superior beach. This lake is the biggest of the Great Lakes – and the second-largest lake in the world at 31,700 square miles 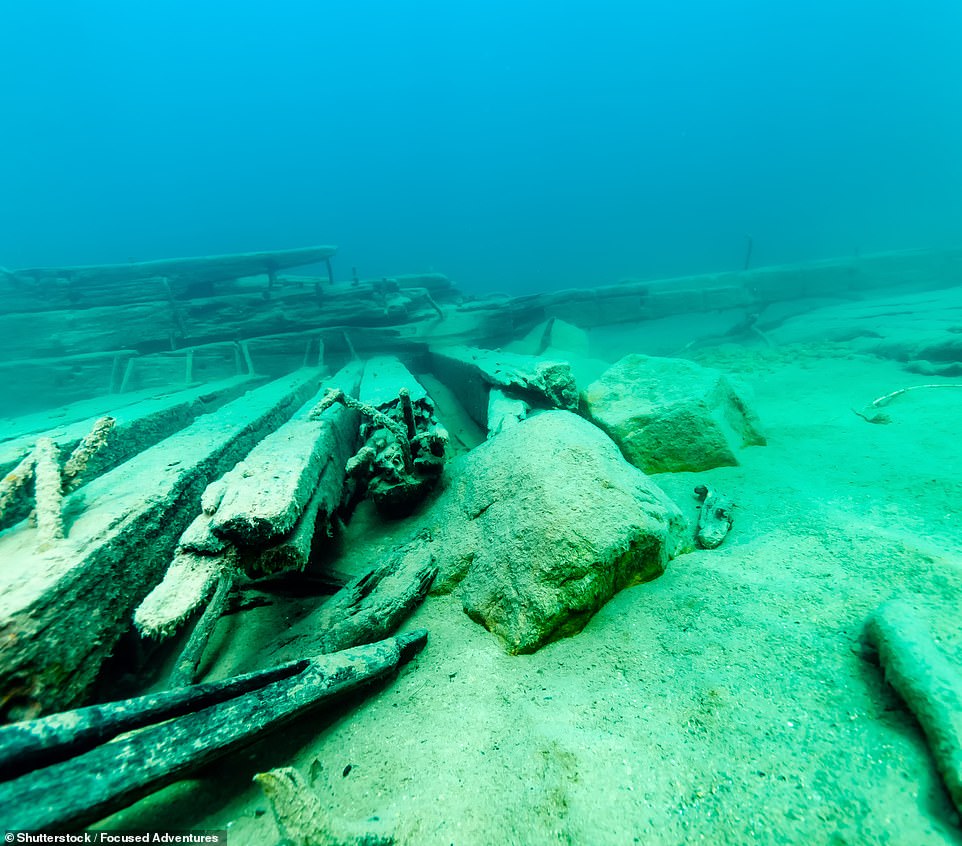 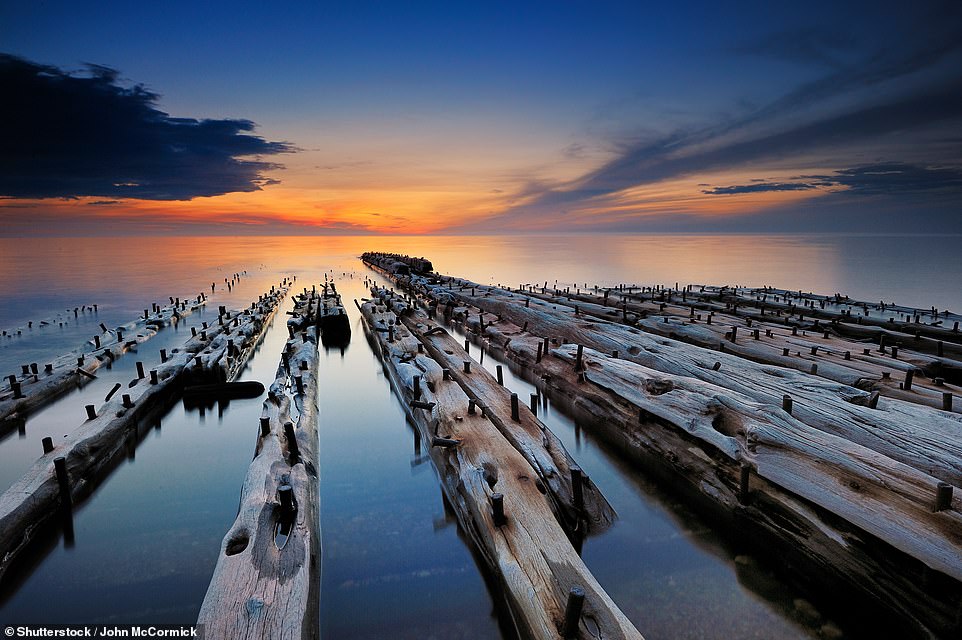 An old shipwreck on the shores of Lake Superior, which is over 1,300ft deep in places

Divers can safely examine many of the wrecks, which lie in water between five and 250 feet deep.

It’s also possible to see them without getting wet – thanks to glass-bottom boat tours.

The most infamous night of terror from Lake Huron’s maritime history came in 1913, when a great storm – nicknamed The Big Blow – sank 10 ships in one fateful night, and drove 20 more ashore. 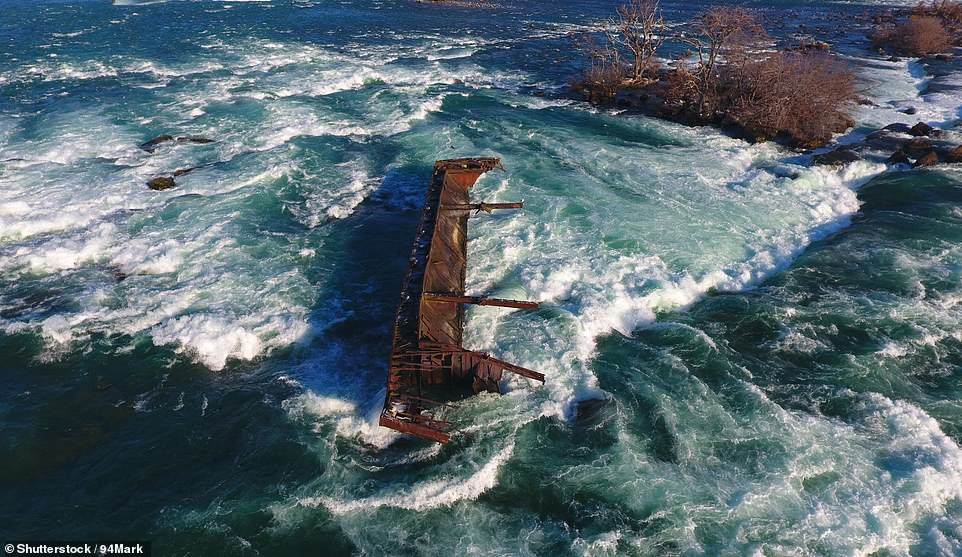 The rusting wreck of the Niagara Scow upstream of the famous falls, enveloped by rapids. The boat brought two men unnervingly close to the edge of the falls in 1918 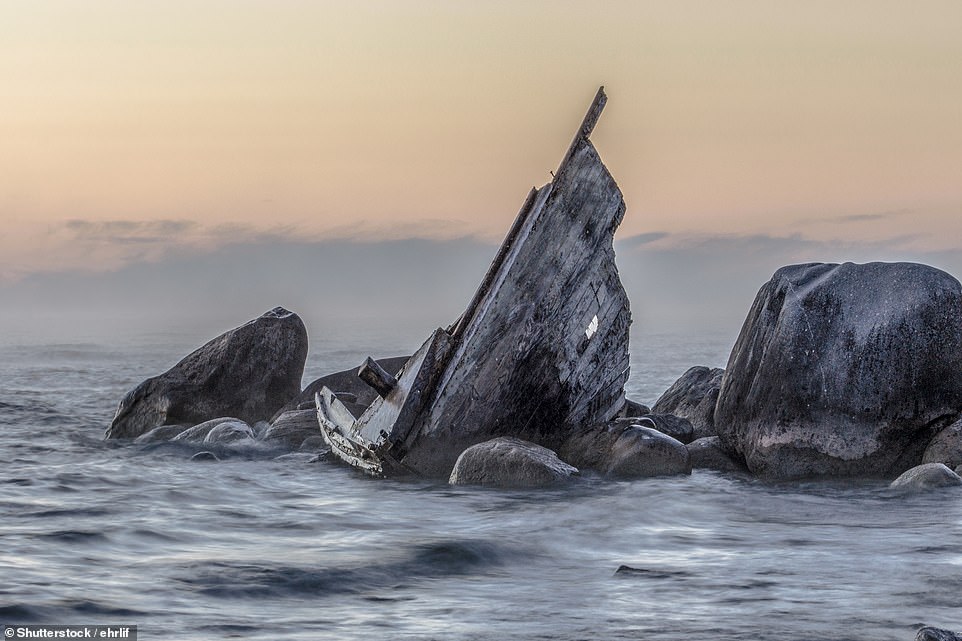 A wreck on a rocky stretch of Lake Huron coast, on the Michigan side

The storm raged for 16 hours and killed 235 seamen.

As recently as 2017, maritime archaeologists found two shipwrecks more than a century old on the Michigan side of the lake. 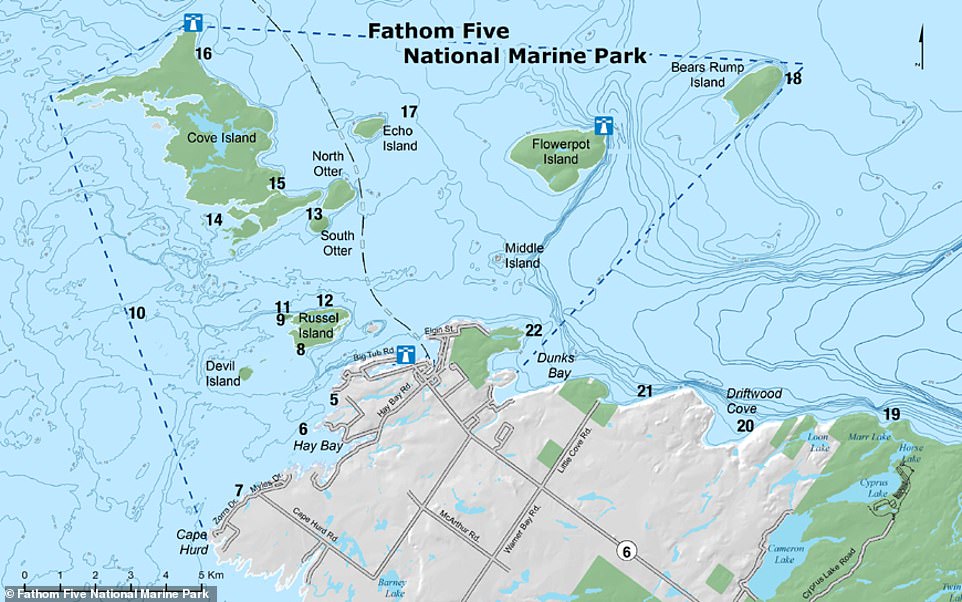 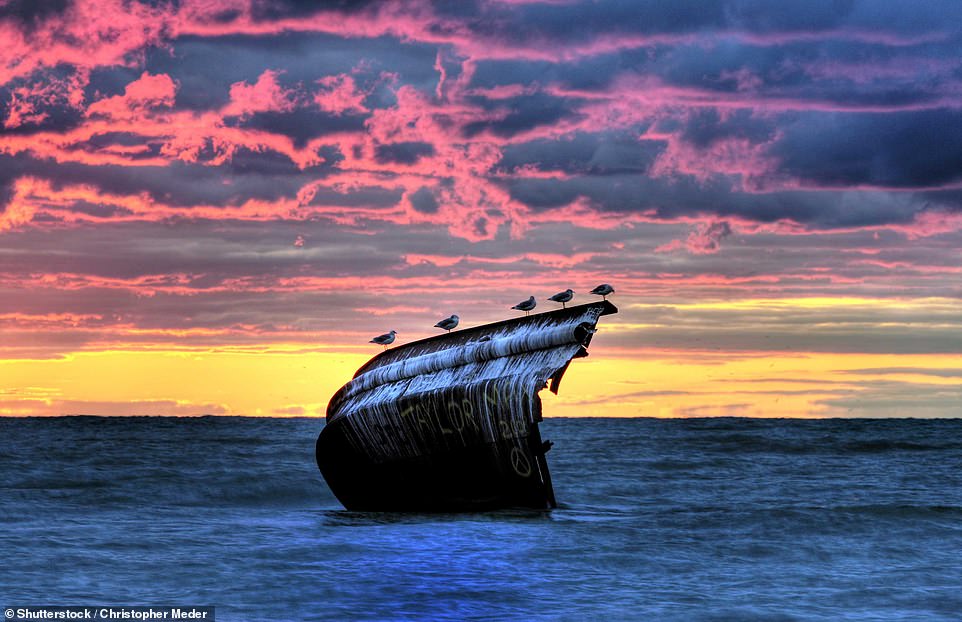 The Ohio sunk in 1894 and the Choctaw in 1915, both in collisions with other vessels. All crew members were rescued from both, but five died from the Ironton, one of the vessels involved in the collision with the Ohio. That schooner is yet to be found.

After the discoveries, Jeff Gray, the Thunder Bay National Marine Sanctuary’s superintendent, said: ‘These remarkable discoveries remind us that the mystery is still out there – there are still shipwrecks to find, our team is excited to further document Ohio and Choctaw, and tell their stories. We’ll keep looking for other wrecks and working to ensure that these treasures are preserved for future generations.’

Charles P. Labadie, a maritime historian, commented: ‘Ohio and Choctaw are remarkable examples of two very significant Great Lakes watercraft, and both are beautifully preserved. Virtually all of their rigging and deck hardware is intact, and there is clear evidence of the accidents that claimed both vessels.’

And only last year, the ‘elusive’ wreck of a 231ft freight vessel called The Russia was found in Lake Huron. It was lost during a storm in 1909.

When travel restrictions are lifted, the Great Lakes will make for a wonderful place to be submerged in history.