How Covid was far from a death knell for Cuba’s most famous hotel: The Nacional in Havana, which has hosted Mafia dons and royals, had a lockdown refurb and looks better than ever

In its 91 years, Havana’s majestic Hotel Nacional de Cuba has borne witness to some of the biggest events of Cuban history.

It was once bombed as part of a conflict between rival units of Cuba’s military, hosted a summit of mafia dons, was a key site of the Cuban Missile Crisis, and a holiday jaunt for Hollywood’s most eccentric figures.

Yet for 20 months ending in mid-November, this building that mixes Art Deco and neoclassical elements along with Moorish tiles was deserted because of the coronavirus pandemic. But far from a death knell for the hotel, it was an opportunity to restore the facade, and put in new floors and windows in the rooms. 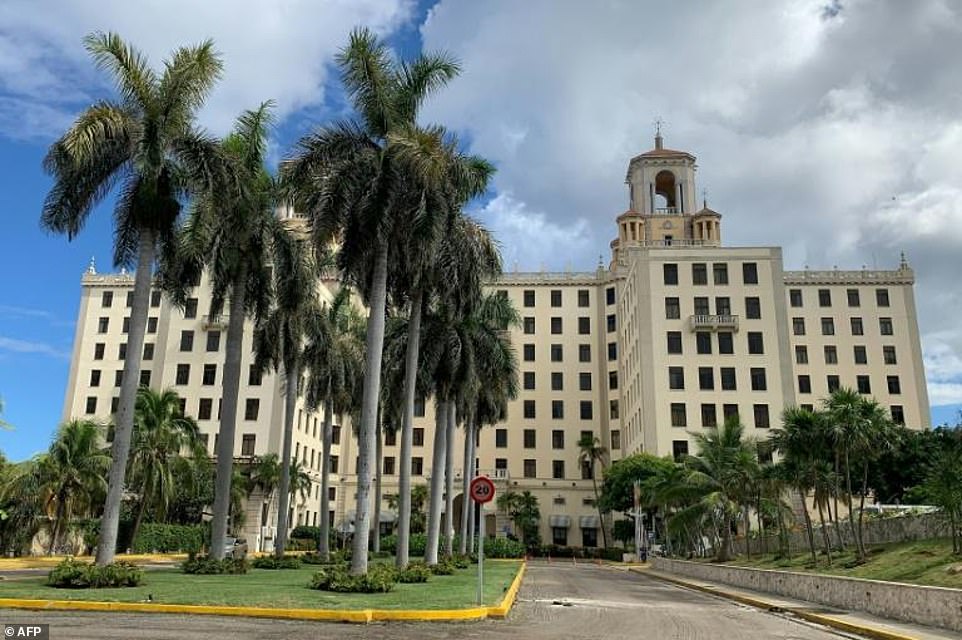 Inaugurated in 1930, Havana’s Hotel Nacional has been the site of several crucial events in Cuban history

‘A lot of work was done so that when the tourists returned they would find the 1930s hotel, although with greater comfort… reliving the past,’ said Arleen Ortiz, a specialist in the hotel’s history.

Now guests will often specifically request to stay in certain rooms, like number 211 where the Italian-born gangster Lucky Luciano sojourned in December 1946 during the mafia bosses summit.

That was an incident immortalized in the 1974 film by Francis Ford Coppola, The Godfather II.

As the mobsters meet on a terrace at the hotel, they divide up a cake in the shape of the island nation – a metaphor for their sharing out control of lucrative illicit businesses.

The real summit opened on December 22, 1946, with Luciano seated at the head of a large rectangular table. 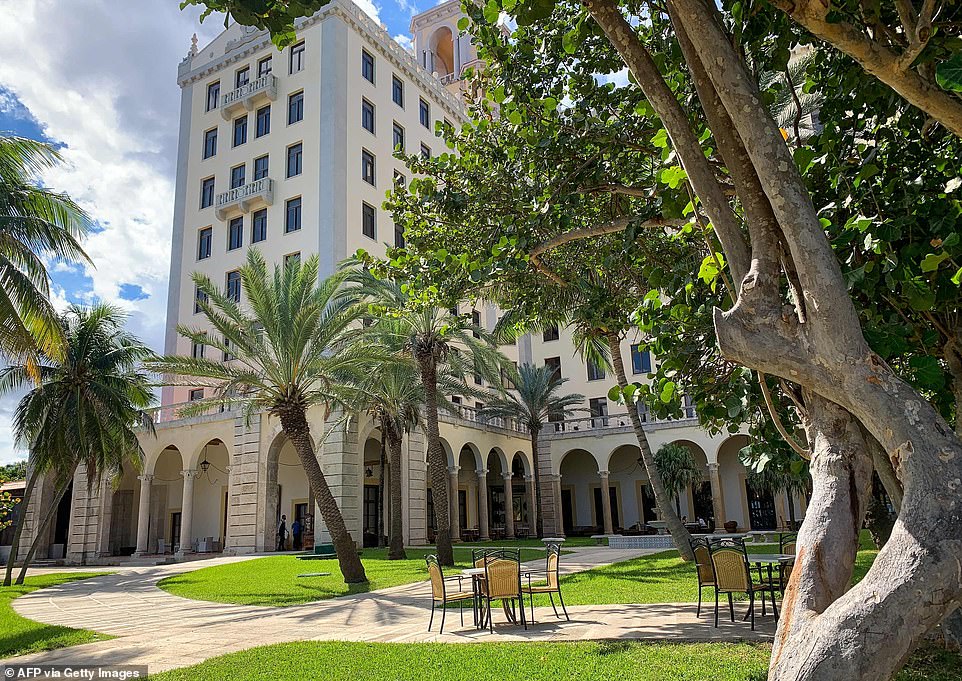 The pandemic offered an opportunity to restore the hotel’s facade, and to put in new floors and windows in the rooms 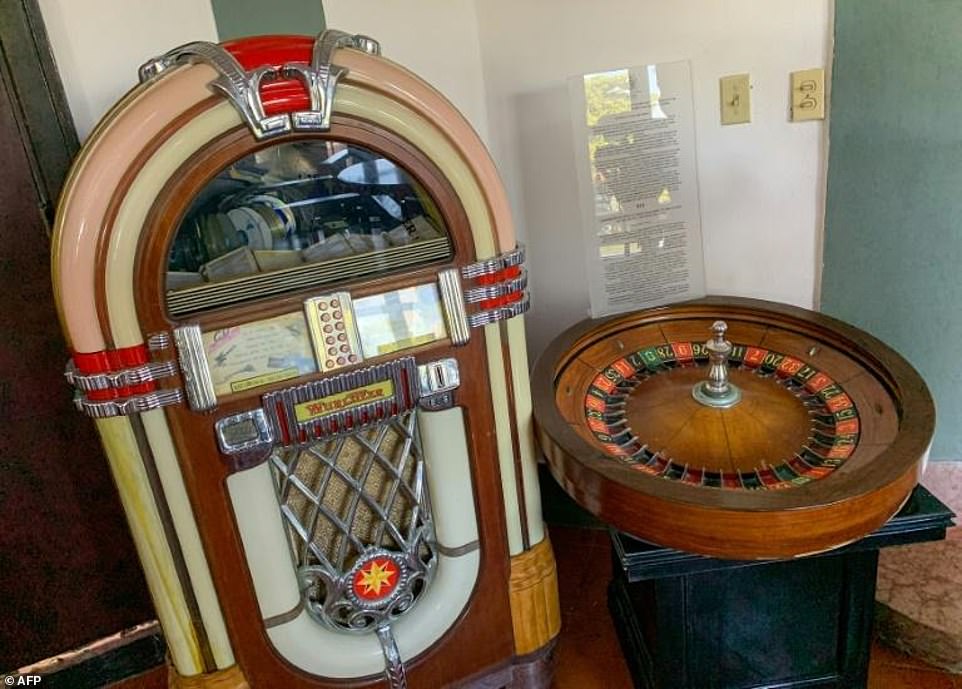 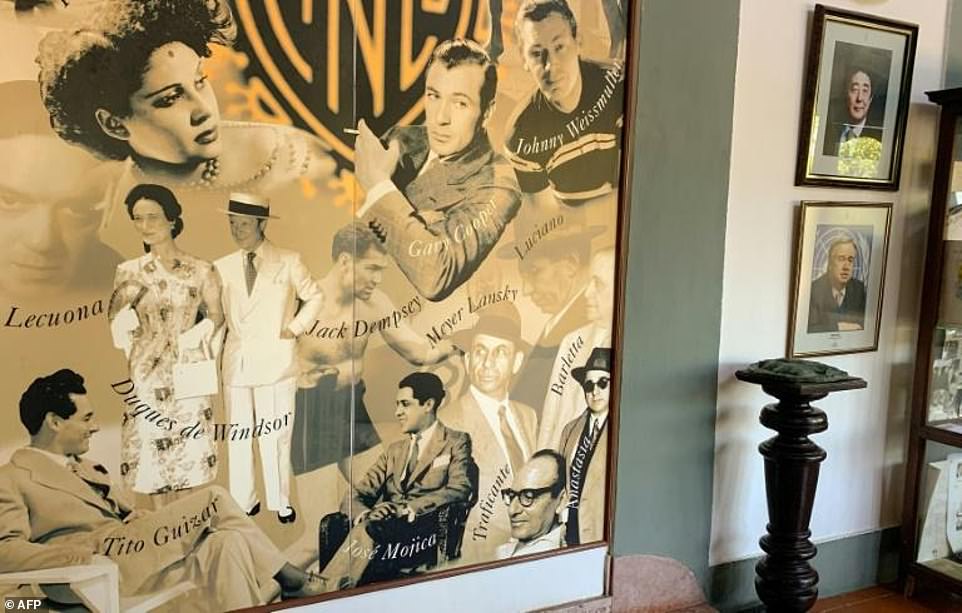 Over the past 91 years, the Hotel Nacional has attracted a motley mix of celebrities and gangsters 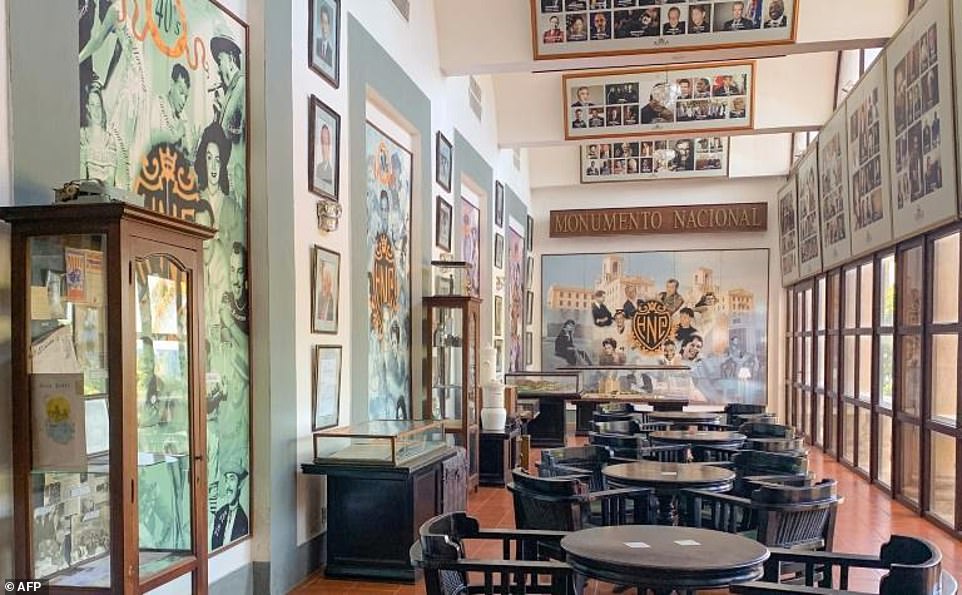 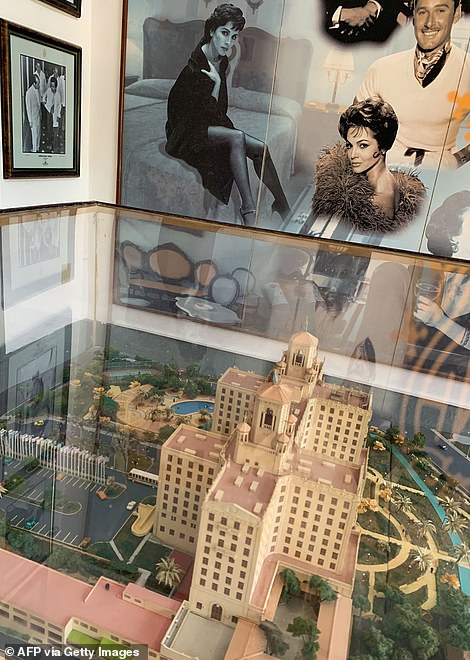 ‘Las Vegas didn’t exist and Cuba was the perfect place for gambling due to its proximity to the United States, the climate, the beaches, the rum,’ said Ortiz.

Havana was ideally placed to become the gambling capital of the world.

The entire hotel had been booked by the dons for their families to spend Christmas in the city, with Frank Sinatra a special guest for the occasion.

Perched on a hill overlooking the Straits of Florida, the Hotel Nacional – with its brand new English china, clocks imported from Germany and chandeliers hanging from the ceilings – was opened on December 30, 1930, allegedly financed partly with mob money.

Just three years later, 400 army officers loyal to the deposed president Gerardo Machado hunkered down in the hotel as government troops bombarded it from land and sea.

Outnumbered and with ammunition running out, they were soon forced to surrender.

The hotel survived, bearing the pockmarked signs of the siege, but would soon be attracting a very different kind of attention. 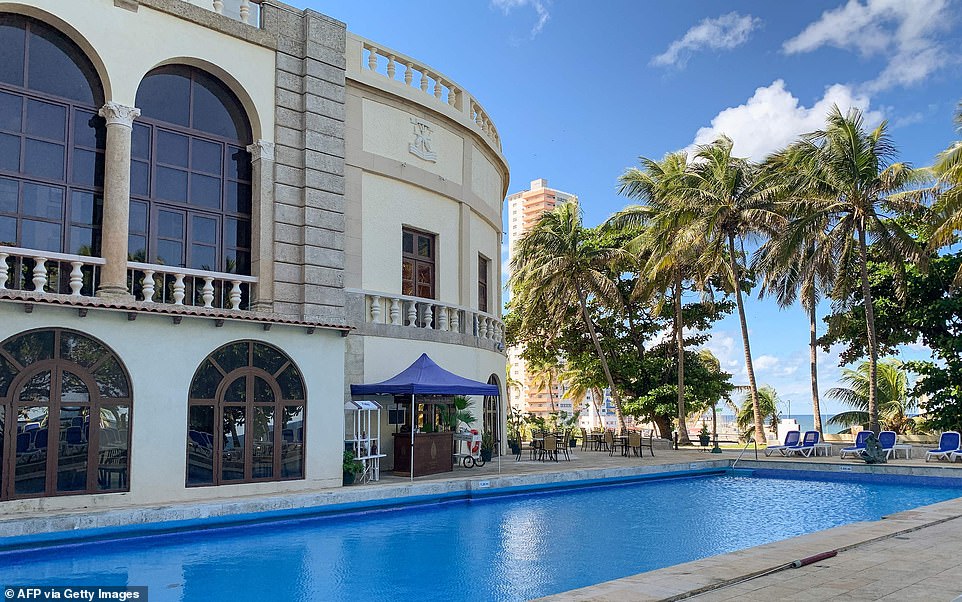 The pool of the Hotel Nacional, into which Olympic swimming champion and former Tarzan Johnny Weissmuller once jumped from a second-floor window 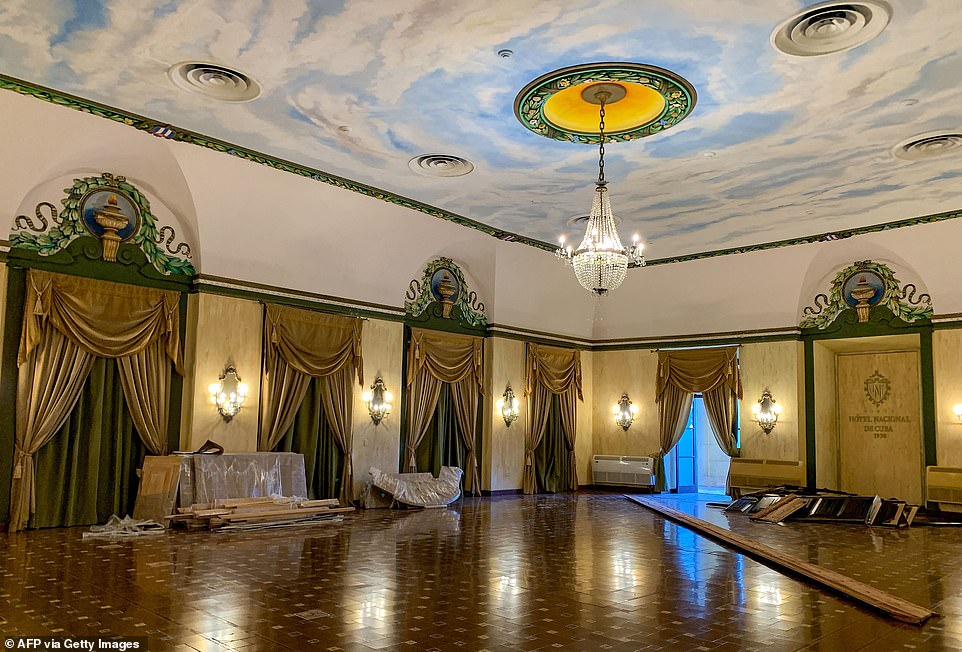 The halls and rooms are filled with photos, objects and letters of the celebrities that have stayed at the hotel.

Five-time Olympic swimming champion and former Tarzan actor Johnny Weissmuller was one such guest, impressing staff by jumping from a second-floor window into the swimming pool below.

In the 1950s, Ava Gardner drank daiquiris for breakfast at the hotel after a night of partying in Havana’s cabarets alongside the likes of Ernest Hemingway. 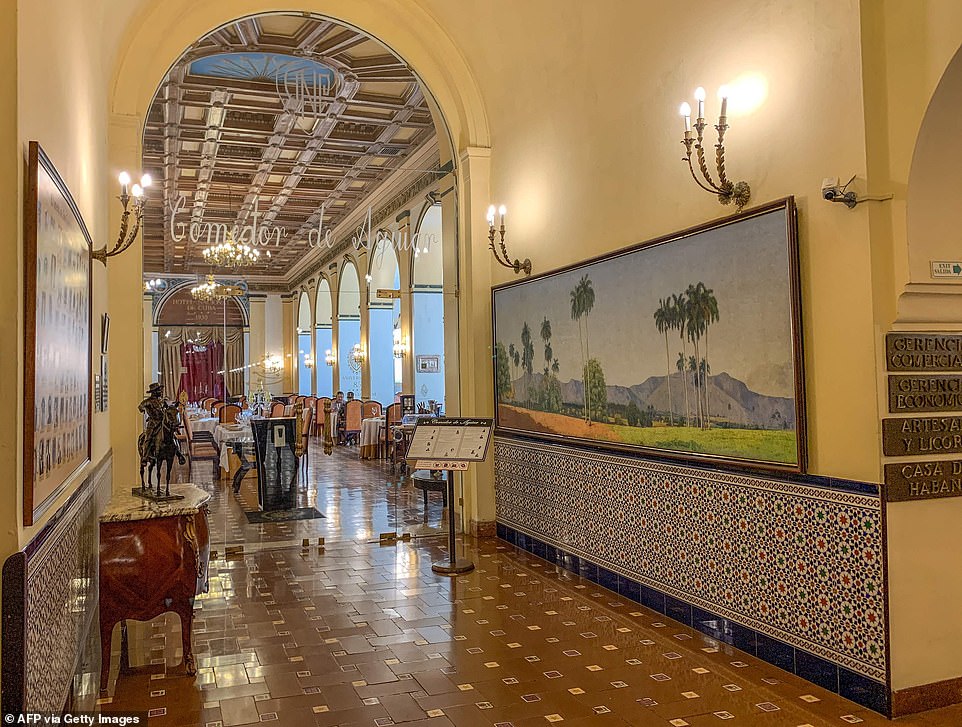 Guests at the hotel will often specifically request to stay in certain rooms, like number 211 where the Italian-born gangster Lucky Luciano sojourned in December 1946 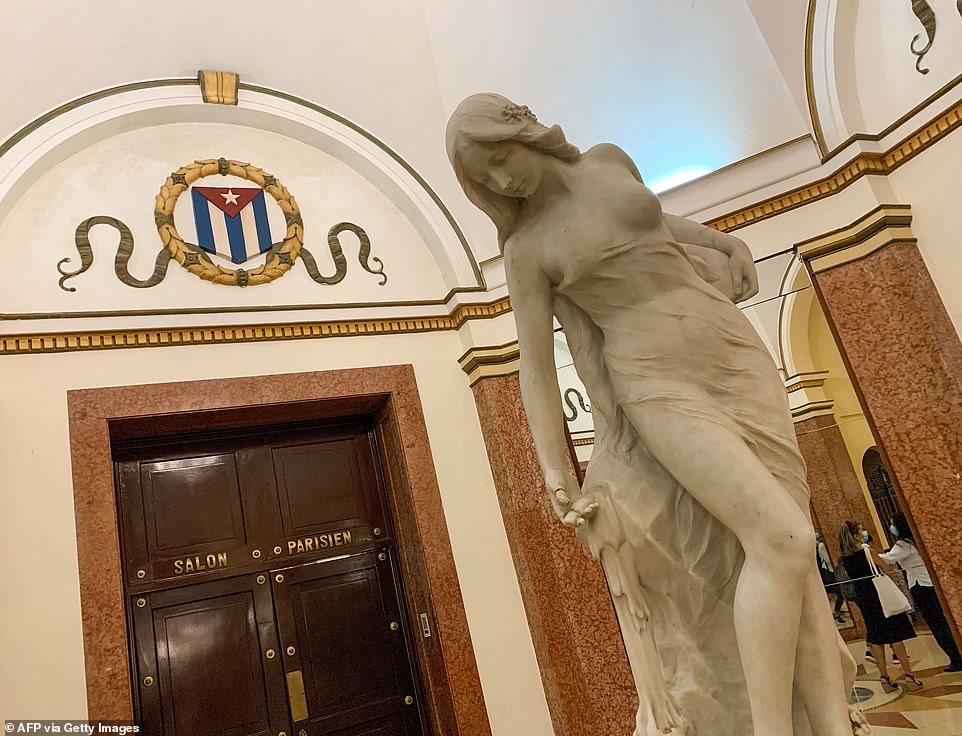 The foyer of the Parisien Room at the hotel. ‘It’s beautiful, it’s magical being here,’ remarked one guest during their visit 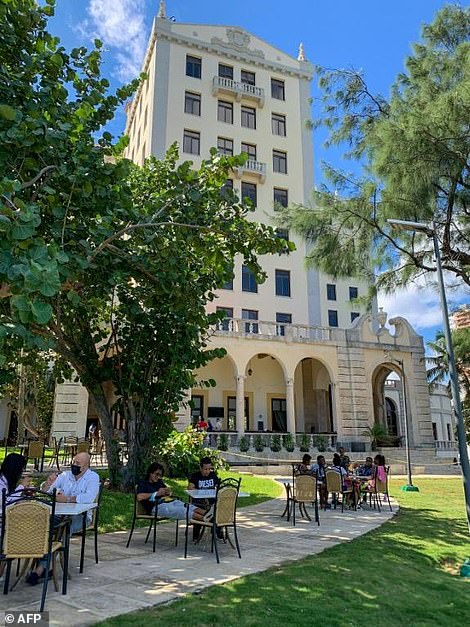 The Duke and Duchess of Windsor, Winston Churchill, Marlon Brando, Errol Flyn, Rita Hayworth and Nat King Cole all stayed at the hotel.

But following Fidel Castro’s communist revolution of 1959, the hotel was converted into a dormitory for 900 peasant women who went to the capital to learn to sew.

Ortiz explained that ‘those young women, who had never before left their homes with no electricity and dirt floors’ suddenly found themselves in the plush hotel’s elegant rooms.

Tensions would soon mount again with the 1962 Cuban Missile Crisis, when soldiers dug trenches and tunnels underneath the hotel grounds as the United States and Soviet Union teetered on the brink of nuclear war.

But it is for star-gazing that it is best known.

‘The foreigners know this place and what they want is to sit where so many celebrities did before them,’ said Tania Fernandez, a Cuban doctor from Sancti Espiritus province who brought her children to explore the tunnels.

The hotel underwent another makeover in the 1990s, a time when the hardline communist regime barred locals from staying there.

‘It’s beautiful, it’s magical being here. I love the Cuban people and I love the energy. It’s incredible,’ Sierra, 39, an American teacher, said while sipping wine with her boyfriend and looking out to sea.