When, in 2011, British adventurer Alastair Humphreys coined the term ‘microadventure’ little did he know his neologism would go off on a mini-expedition of its own. His concept of launching expeditions from your front door rather than to the North Pole inspired people to get outdoors on quick, quirky trips – trips that usually involved self-propulsion coupled with under-the-stars accommodation.

‘A microadventure,’ said the term’s inventor, ‘is an adventure that is short, simple, local, cheap.’

The quick, quirky trip I describe here was none of those things, but in my book, it was still a microadventure because it featured self-propulsion – thanks to folding bikes – and the accommodation was a teeny tent on a misty moor. 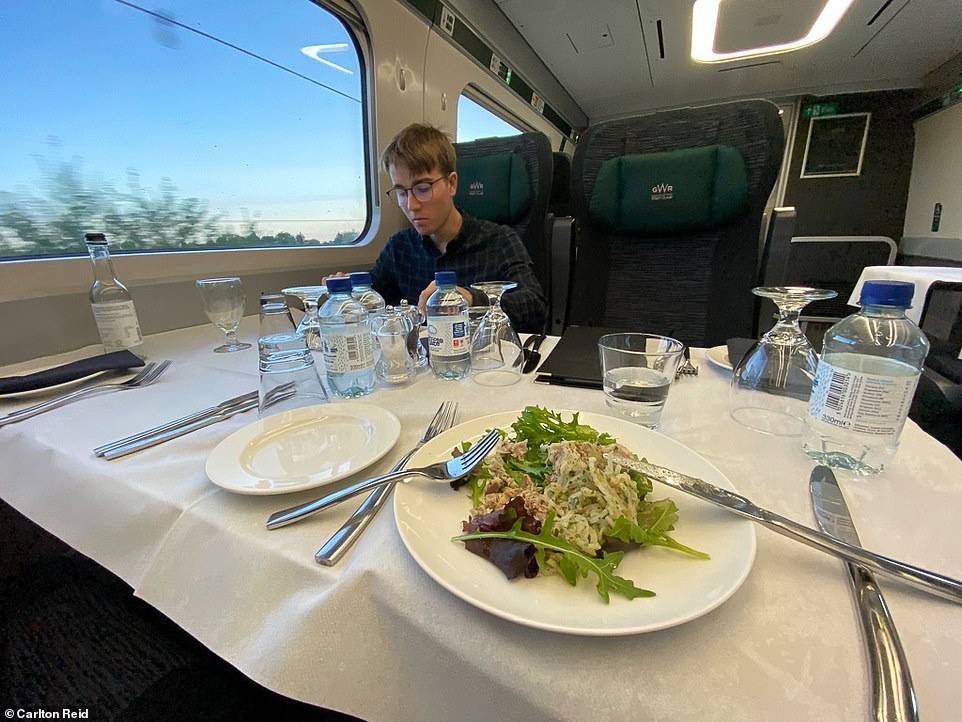 Josh tucking in to his burnt leeks starter. Carlton had a terrine of confit duck and chicken

GWR Pullman crew members are chosen for their sunny dispositions

The trip was not cheap. Along with my globe-trotting son (he imported a Chinese-made bike into the UK by riding it 14,000kms back from the factory) we travelled by first-class rail from London to Devon on Great Western Railway’s Pullman service – England’s last dining car.

If the onboard crew was thrown by two blokes boarding with bikes and a bunch of bicycle bags, they certainly didn’t show it. Far from being sniffy, they were fascinated by the pedalling paraphernalia piled up on Paddington’s Platform 2.

Part of the warm welcome might have been because GWR’s famous Pullman service was only gradually getting back on track – literally – after a long, pandemic-shaped hiatus.

But it was more likely to be because Pullman crew members are chosen for their sunny dispositions. Two oiks with grimy bikes getting on a flagship posh-nosh train service? No problem.

We were booked on the evening train to Penzance and would get off at Newton Abbot late at night. From there, it would be a ten-mile uphill slog to Saddle Tor in the dark where we would pitch our two-man tent. (Unlike in the rest of England, wild camping is legal on much of Dartmoor.) The following day we would strike camp and leg it back to the station for the lunchtime Pullman to Paddington. 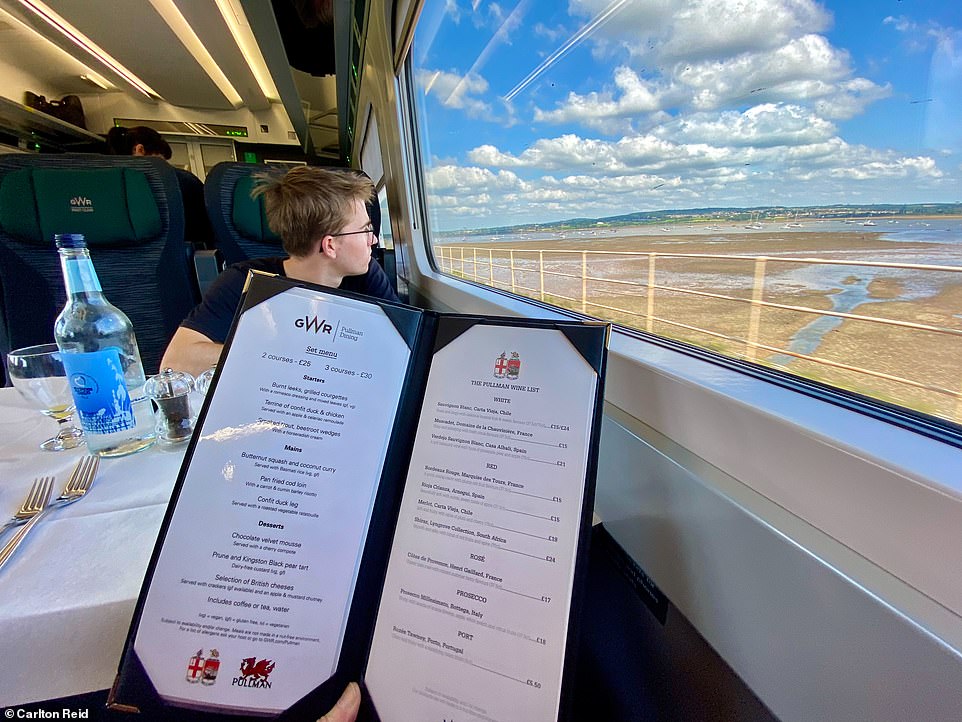 We were travelling reasonably light but it was nevertheless awkward, back on Platform 2, to remove the luggage, fold down the bikes, heave everything on to the train and remain socially distanced.

Overlooked by a statue of Paddington bear, the crew directed us to squeeze bikes and bags between our first-class seats.

Sorted. Then the luxury began. Would we like a drink? Do Paddington-of-Peru’s relatives leave deposits among trees? 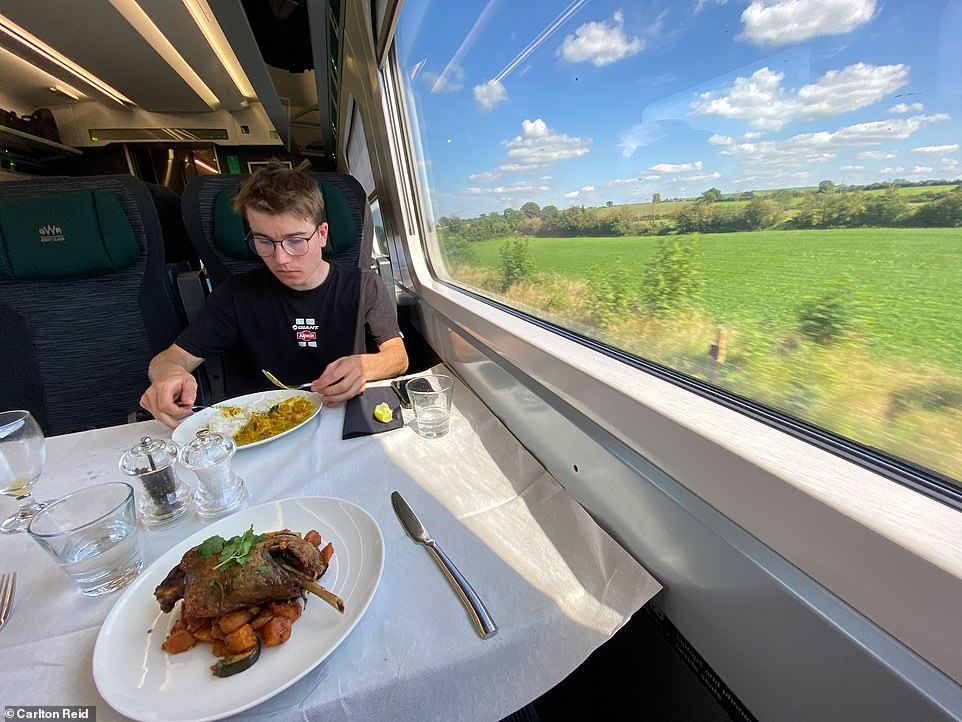 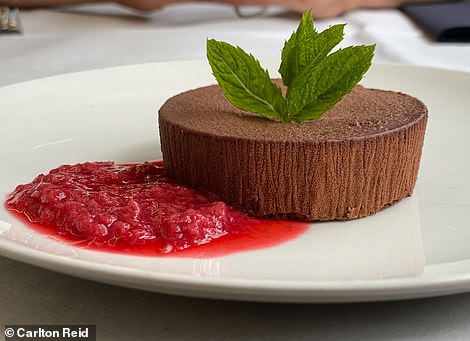 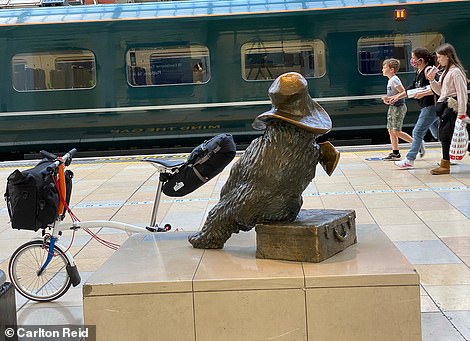 On the left is the GWR Pullman Chocolate velvet mousse. Pictured right is the Paddington Bear statue at London Paddington 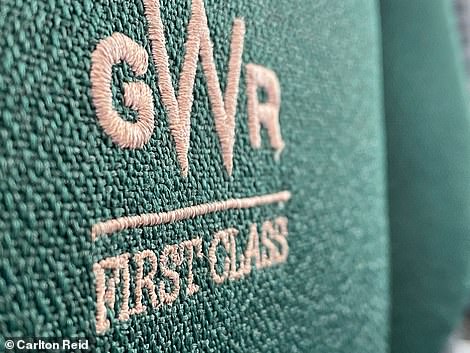 Usually, I’d ask for a gin and tonic, but with a hilly bike ride looming at 10pm I plumped, instead, for sparkling water, sipping it gingerly as the train picked up speed.

The Great Western Railway’s historic main line – designed, in 1835, to run between Bristol and London by the 29-year-old civil engineering genius Isambard Kingdom Brunel – is famously fast. After Old Oak Common, just six minutes after leaving Paddington, the train begins its 125mph acceleration through to Reading.

Outside the windows, the suburbs scrubbed to a blur, with focus switching to the menu and the promise of gourmet food.

I had burnt leeks as a starter. That’s not a complaint, that’s the entree’s description on the menu. Grilled courgettes kept the caramelised vegetables company bound together with a romesco dressing. This was the only vegan starter – and as a vegan, that’s what Josh had, too.

He had the same choices there and back. I ate through almost the full menu.

The other starters were a terrine of confit of duck with chicken, and flaky smoked trout interspersed with beetroot wedges.

I had the pan-fried cod for my main course, Josh had the first of his two butternut squash and coconut curries. (The third mains choice was confit of duck leg with ratatouille.)

With a punishing ride to come, I chose the most calorific dessert: a rather scrumptious prune and Kingston black pear tart. This vegan treat was served with dairy-free custard – which, to my surprise, wasn’t half bad – and Josh had that, too. Twice, it turned out. (The other dessert was a chocolate mousse with a cherry compote.) 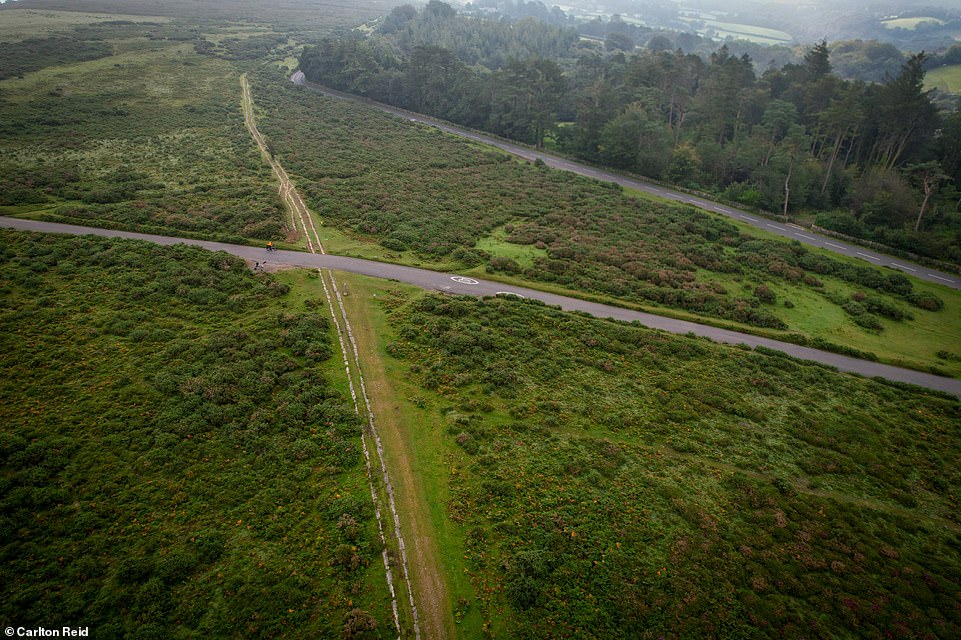 Josh riding close to the tracks of the Haytor Granite Tramway built in 1820 to transport granite from Haytor Down quarry, Dartmoor, Devon to the Stover Canal. The tracks once guided the wheels of horse-drawn wagons 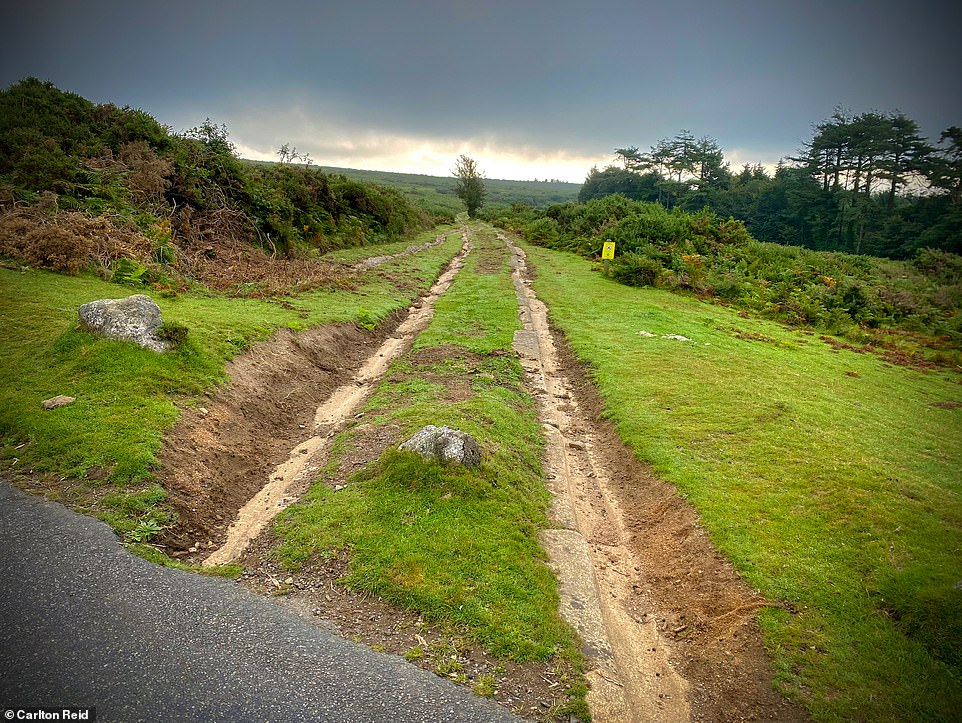 Carlton and Josh arrived at Newton Abbot at 10pm, then cycled to Dartmoor (pictured) via country lanes

GWR’s Pullman has long been known for its silver-service dinners. That is, food guided to the GWR-monogrammed plate with deftly-handled spoons and with vegetables slid from silver platters. Today’s service is a ‘plated’ one. Still posh, still delicious, but the food is no longer ladled out but is brought to the table, as the name suggests, on the plate.

The Pullman’s fabled steaks have yet to make a return. Traditionalists may grumble but that the company has been able to offer any fine dining at all during these difficult times demonstrates that the three-times-a-day Pullman is much loved.

There are posher trains, of course, such as the super-deluxe Belmond British Pullman, but that’s a £400-per-seat special – GWR’s Pullman is a scheduled service. 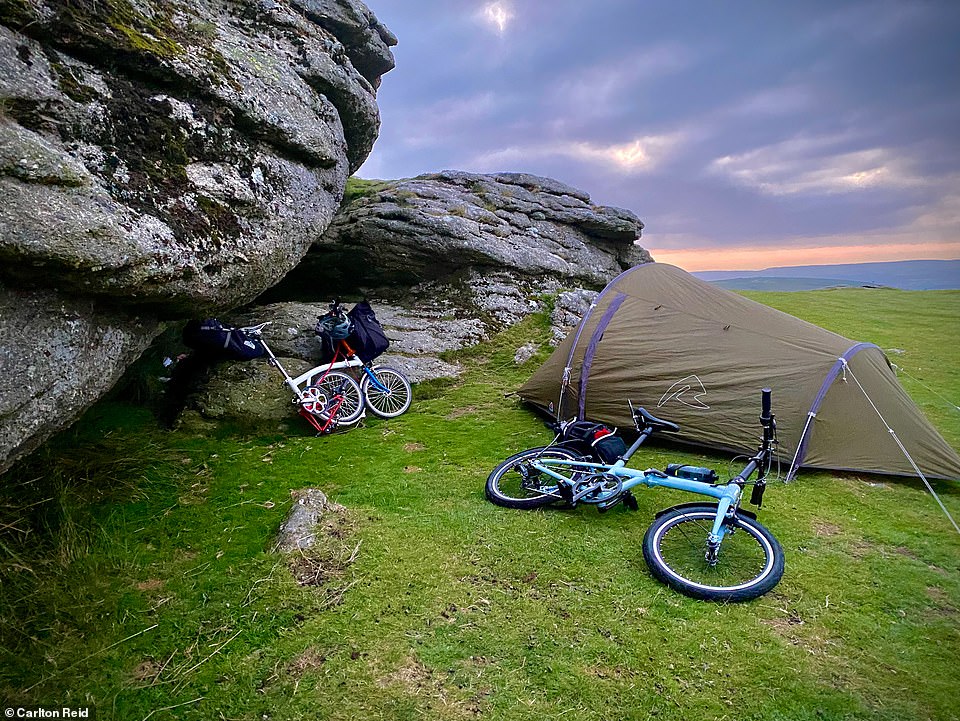 A wild camping sunrise beside Saddle Tor. Carlton and Josh found their way to this spot using the Hammerhead Karoo 2 navigation tool 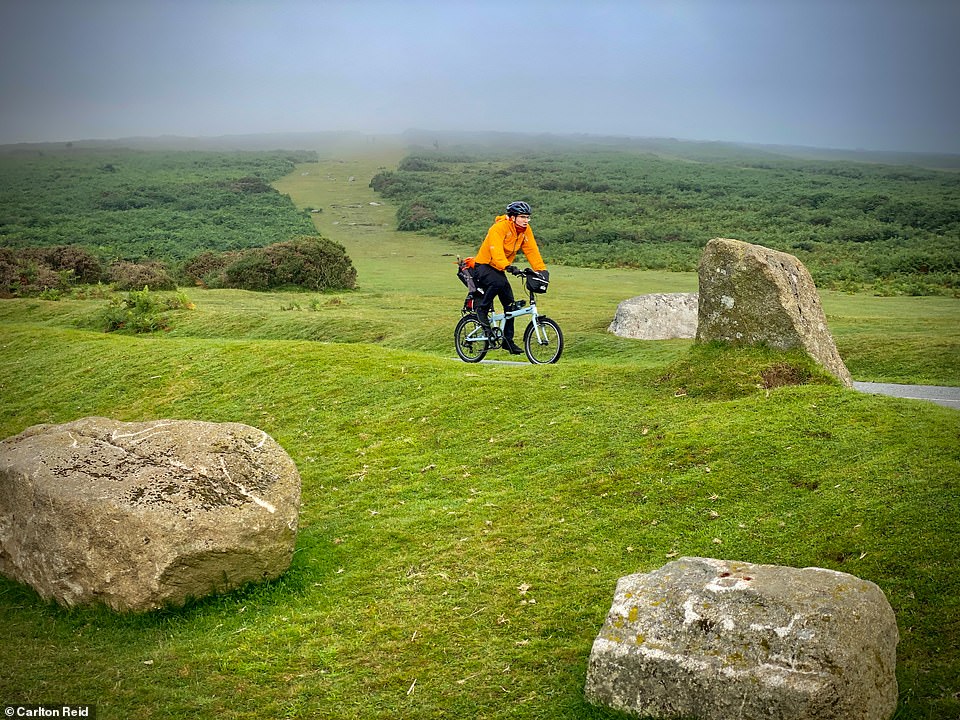 Josh descending on Dartmoor after a night of wild camping. ‘I love microadventures, especially luxurious ones,’ writes Carlton

Operating a Pullman dining service is part of FirstGroup’s GWR franchise agreement with the government, and although the company won’t admit this (yes, I asked), the service – even with £30-per-head meals and £21 bottles of wine – runs at a loss.

Train operating company economics was the last thing on my mind, though, as we pulled into Newton Abbot station at 10pm. As our meal on wheels departed, we snapped the bikes back into shape, clipped on the bags, and put the handlebar-mounted navigation device into night mode so it could guide us, via dark country lanes, to our destination on the edge of Dartmoor.

Fuelled by our fast food, it was the best part of two hours later before we finally slipped into our sleeping bags. And we still had the return journey to look forward to, a daylight glide along the gloriously beautiful stretch of track between Dawlish beach and Exminster via the picturesque Exe estuary.

I love microadventures, especially luxurious ones. 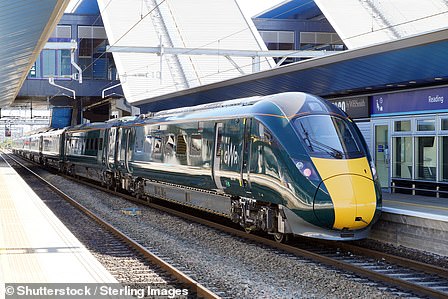 GWR offers a Pullman dining car on 12 services across two routes. This GWR service is pictured at Reading (stock image)

GWR offers a Pullman dining car on 12 services across two routes: London to Penzance and London to Swansea. A first-class ticket for a service when Pullman dining is operating does not include the dining service itself, this must be booked separately in advance, either online or by phone, up to two weeks beforehand. The meal is paid for on the train. Standard class passengers can access Pullman dining but cannot pre-book. This means it’s possible to bag an upgrade to first class for the price of a starter and main course, but there’s no guarantee of space.

A return first-class ticket from London to Newton Abbot costs about £180. A two-course Pullman meal costs £25 with £5 for dessert or the cheese course; bottled water is free; alcoholic drinks are extra.

Carlton was riding a Brompton folding bike. Josh was on a Momentum folding bike, which is not the bike he rode back from China. They slept in a Robens tent, with country lane navigation by the Hammerhead Karoo 2. It’s possible to take full size bicycles on GWR trains but they need to be pre-booked, and it may be a struggle for anything other than slimline road bikes.

For more information visit www.gwr.com/travelling-with-us/pullman-dining. Availability can be checked with GWR’s social media team via WhatsApp on 07890 608043. 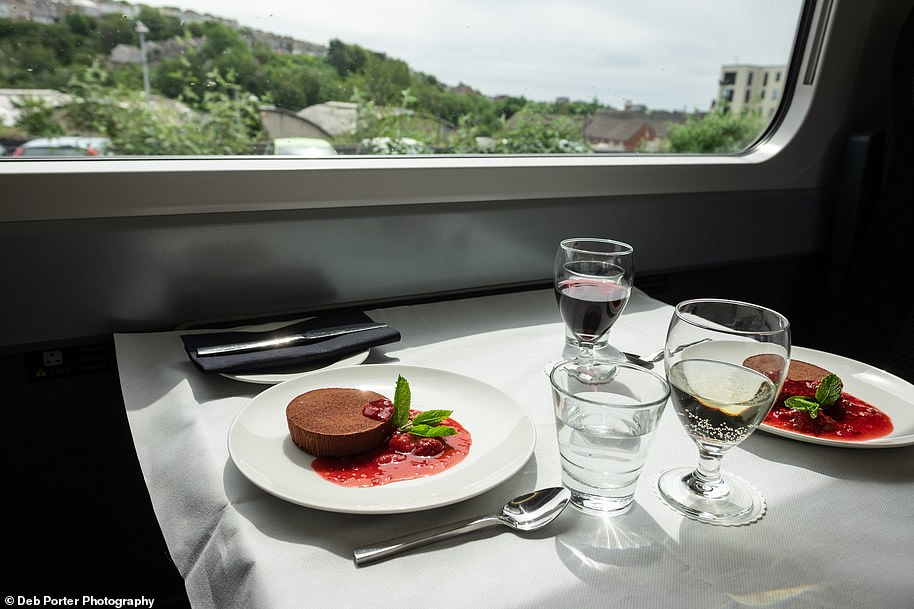 A return first-class ticket from London to Newton Abbot costs about £180. A two-course Pullman meal costs £25 with £5 for dessert or the cheese course; bottled water is free; alcoholic drinks are extra