It’s running from September 24 and this year is all about the dark arts, with Lord Voldemort’s infamous symbol, the ‘Dark Mark’, projected throughout the studio tour. Guests can collect a Studio Tour passport on arrival and go on the hunt for it as they explore.

They’ll tiptoe beneath 100 floating pumpkins in the Great Hall, face a Death Eater in a duel, and over-18s can even attend a special spooky dinner on the haunting set. 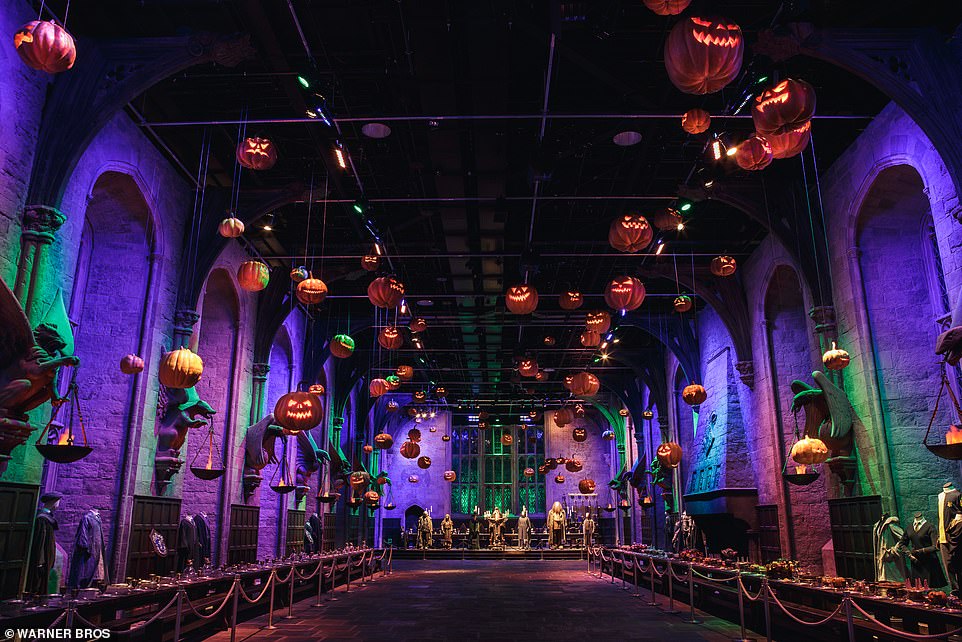 The floating pumpkins in the Great Hall were handcrafted by the Head Propmaker on the Harry Potter films, Pierre Bohanna 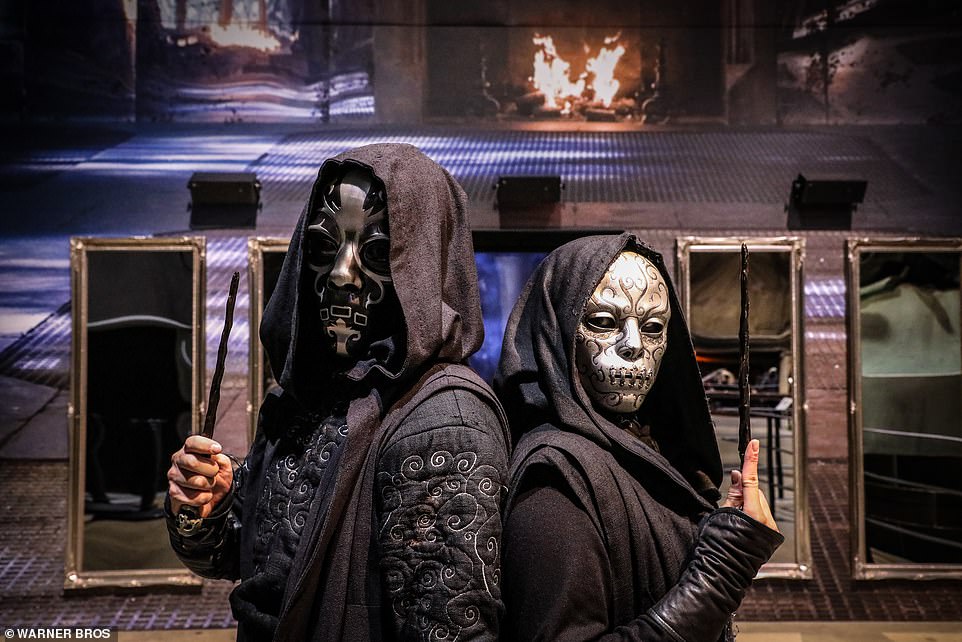 Lord Voldemort’s infamous symbol, the ‘Dark Mark’, will be projected throughout the tour. Pictured are two Death Eaters ahead of a duel

Harking back to the Halloween scene in Harry Potter and the Philosopher’s Stone, the pumpkin lanterns were handcrafted by the Head Propmaker on the Harry Potter films – acclaimed designer Pierre Bohanna and his team.

The team also designed the elaborate feast that will be displayed in the Great Hall, the tables piled high with confectionary.

Visitors will be invited to learn a sequence from the Battle of Hogwarts wand combat scene in Harry Potter and the Deathly Hallows – Part 2.

Once they’ve honed their skills, they can test out their spells on cloaked Death Eaters. 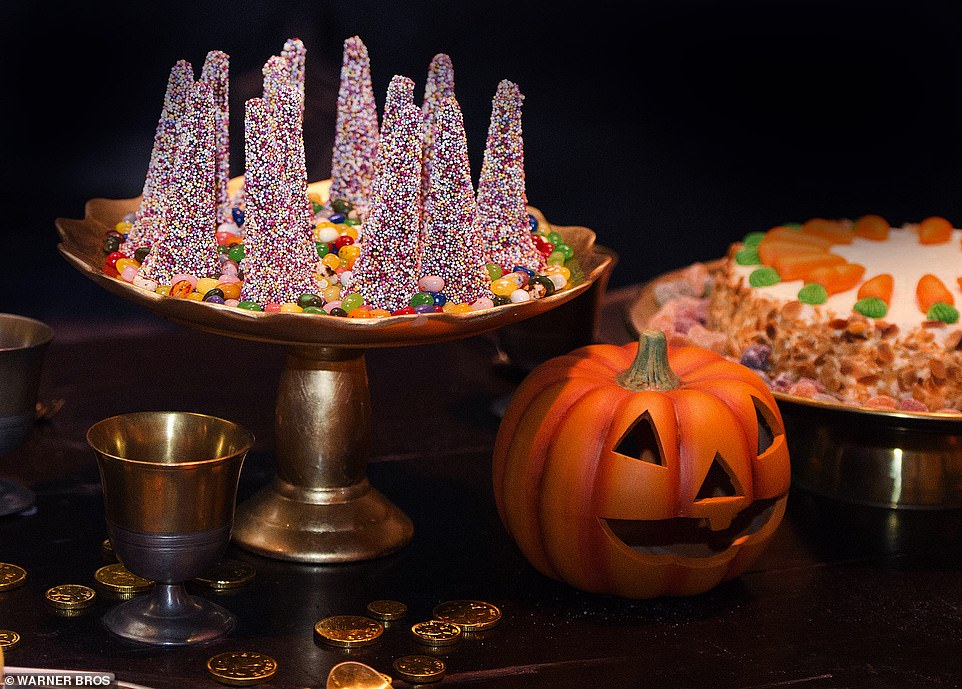 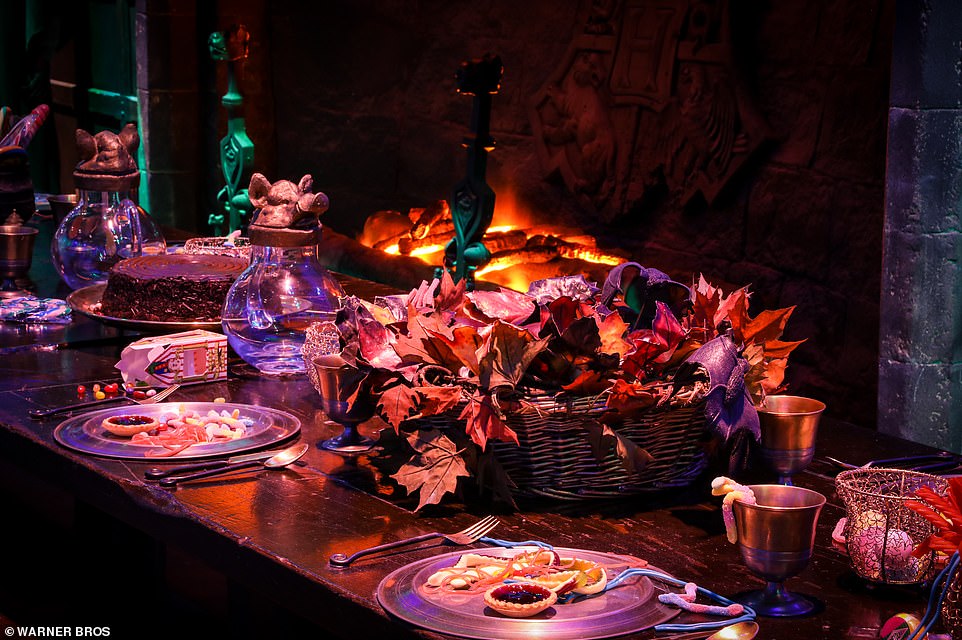 Over three separate nights, a select few Harry Potter fans will be wined and dined on the film set as part of the Studio Tour’s Hogwarts After Dark events.

The evening begins with smoking dry ice cocktails and canapés before guests are summoned into the Great Hall for a spread.

The lights will dim, Death Eaters will patrol the hall and foreboding music will play as attendees enjoy a two-course meal.

Once the main course is finished, guests will ‘grab a lantern and follow the spiders into the Forbidden Forest where dessert will be served among the imposing trees and creatures found in the out-of-bounds section of Hogwarts’.

Throughout the evening, guests will learn some of the behind-the-scenes secrets of the movies, such as how troll snot and unicorn blood was created.

And they will duel with Death Eaters. What’s more, there will be a guest appearance from Harry Potter Wand Choreographer Paul Harris to teach the wand combat moves seen in the battle scenes.

Ahead of the event, Paul described the importance of wand combat as a ‘physical element to casting a spell, because otherwise what makes one wizard better than another?’ 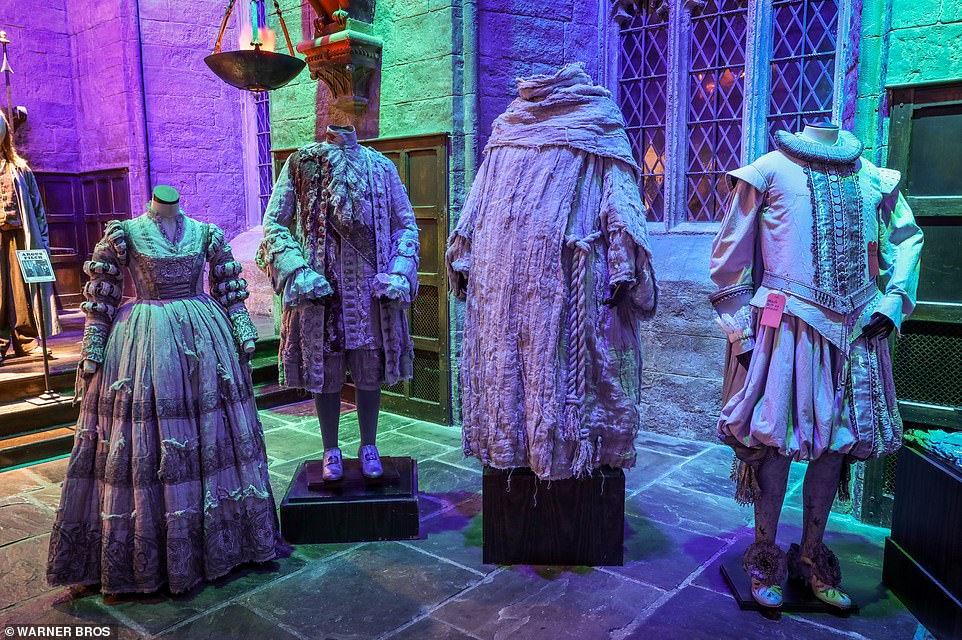 Over three separate nights, a select few Harry Potter fans will be wined and dined on the film set as part of the Studio Tour’s Hogwarts After Dark events 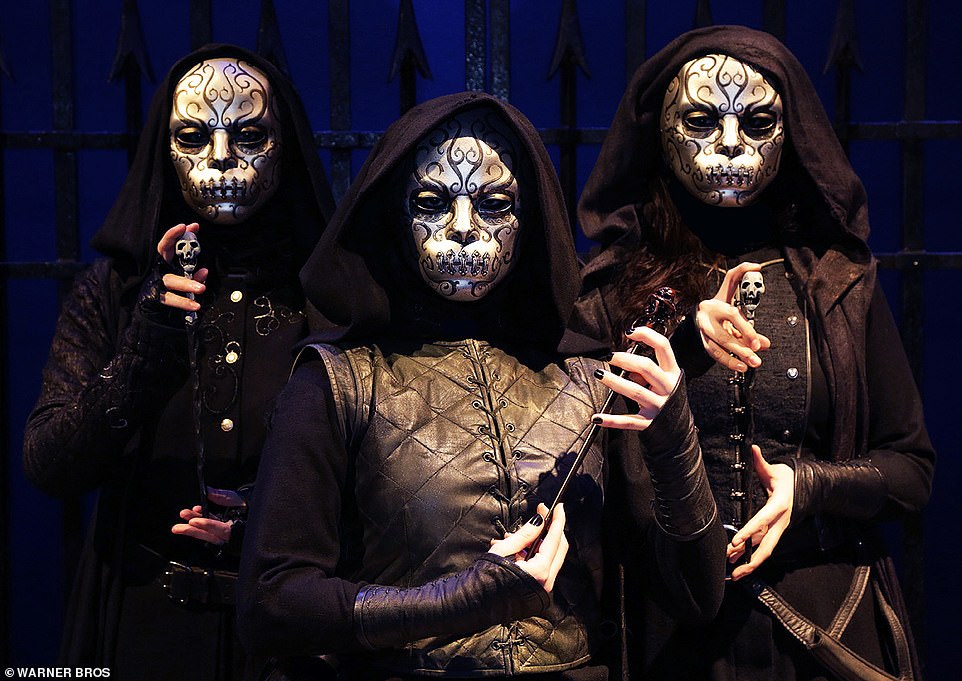 Butterbeer will be on offer on the night for all, and those who fancy another tipple can head to Platform 9 and three quarters, where further drinks will be available.

Tickets must be pre-booked at www.wbstudiotour.co.uk or by calling the Studio Tour’s Visitor Services Team on 0345 084 0900 and cannot be bought at the attraction.

The Studio Tour’s ‘Hogwarts after Dark’ events will take place on October 6, 7, and 8 from 7:30pm until midnight and are open to over-18s only. Guests will be seated at tables of 10 or 12 and tickets are priced at £260pp. Tickets will go on sale at 10am on August 24 for Harry Potter Gold members and August 26 for general release. Tickets will be available to purchase at www.wbstudiotour.co.uk/after-dark or by calling 0345 084 0900. 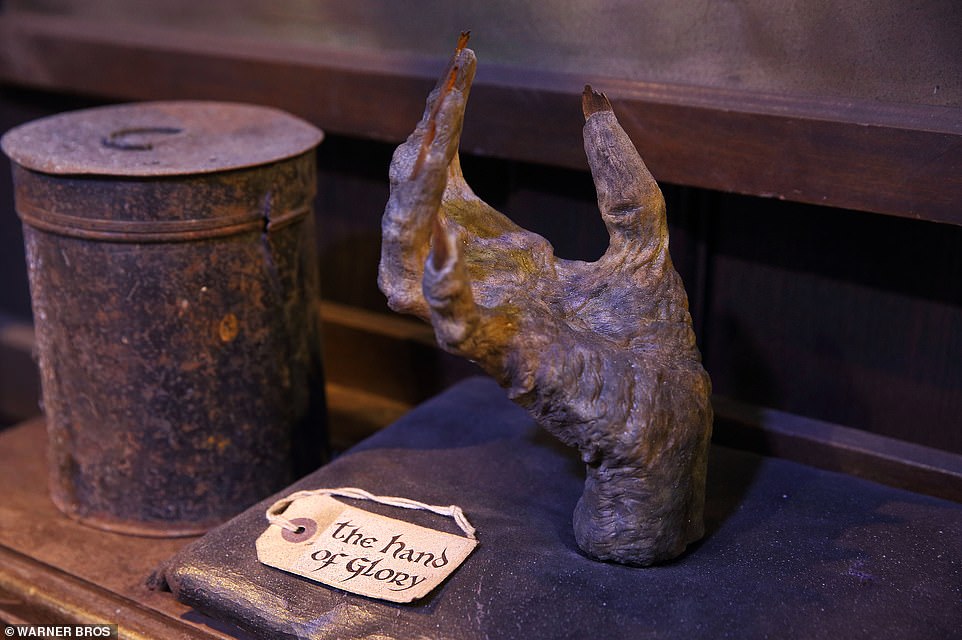 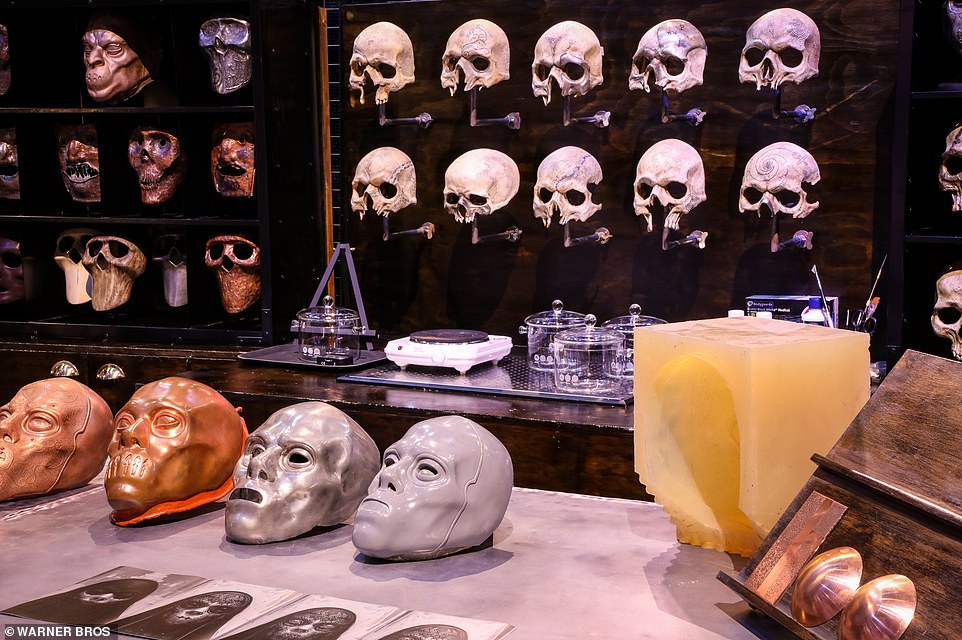