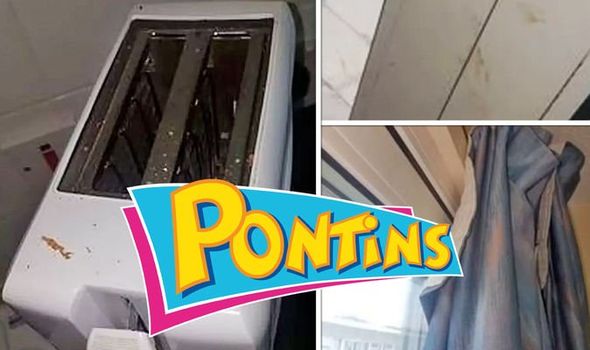 A holiday park that was closed for several months due to the pandemic has been slammed by one of its guests as being “filthy” and claimed that there were dead flies as well as dried blood on the walls. From the standard of accommodation to the level of customer service, the woman who was set to stay in one of the park’s luxury Club apartments for four nights, warned others about Pontins.

The visitor from Devon said: “From the second we arrived we did not like the look of the place. The apartment was minging, I wouldn’t even change my child’s dirty nappy in there.

“The mirror was covered in toothpaste. I then looked at the kitchen space and underneath the microwave wasn’t clean. There was a toaster full of crumbs.

“The PVC on the door within the apartment had blood on it and the fridge was stinking like gone off milk.

“The ironing board was stained, tiles were falling off in the bathroom and a curtain was half hanging down.”

The woman, who was visiting with her partner and 14-month old baby, left after just four hours after she phoned her mum in tears.

The family were gifted the stay as a special birthday treat.

According to Pontins website, the prestigious apartment that the family should have stayed in provides guests with a “host of additional benefits like free electricity” as well as the “extra luxury of early check-in from 2pm.”

The anonymous woman added: “Mum had paid extra for us to stay in a Club Apartment. So you think if you pay extra, you get better. But no.

“We arrived ready to check in at 2pm, but we were left waiting for 45-minutes until we were handed our keys.”

The family also had to pay £10 extra to book a cot for their baby and an extra £20 to collect it.

This isn’t the only complaint Pontins has had about staycation visits.

The Mirror reported that mum-of-one Shereen Garraghan, who visited Pontins Camber Sands, said the place was so unclean she “wouldn’t even leave dogs in”.

She explained that the queues to check in stretched for ages as well as the whole site experiencing a complete power cut.

She said: “It is terrible down there, everyone is complaining, no one was doing anything about it.

“It is seriously chaotic. It is the filthiest place I have ever been to.

“I got there on Friday and then immediately wanted to leave.”

Shereen claimed it took so long for people to check in that it was night time at the point they were able to see their cabins.

She added: “One woman with three kids was really upset because it was too late to leave and she was told if she stayed one night she wouldn’t get a refund.”

Speaking about the chalet, the mum-of-one said it looked like it hadn’t been cleaned for “months”.

The West Londoner expected cleaner conditions due to the pandemic and the amount of time the place had to be cleaned.

Shereen found “piles of dirt” everywhere and said that the place needs shutting down to be cleaned properly.

She said: “I’ve seen prisons cleaner. People are paying to live in conditions you wouldn’t leave dogs in.”

She also claimed that she spotted dirty and empty hand sanitisation stations as well as two children sitting in the back of a police car on her way to the complaints desk.

Other Britons who have headed for a staycation at Pontins have also complained of the “atrocious” condition of the rooms.

One Twitter user, who visited Pontins in Southport, said: “Southport is atrocious. Came on holiday, brought a few cleaning supplies with us but had to nip to Morrisons for reinforcements and a mop.

“Can’t believe we’ve come away for the weekend and the first thing we need to do is buy our own mop and clean all the way through.”

The woman then shared a series of photos of a dirty toilet seat and bathroom.

Another person said: “Pontins is notorious for being filthy, just Google it and you will see.”