Africa’s bountiful secret: Never heard of Sao Tome and Principe? That’s the point – but these far-flung tropical islands are a pure delight for body and soul

Many of us (now more than ever) hope to find a glorious tropical island — somewhere small, perfectly formed, filled with wildlife, an exotic bolthole to escape from the trials of the world.

Sao Tome and Principe, with only 200,000 inhabitants, is a good place to start. Especially as it has more rare birds per square mile than the Galapagos, and more turtles than you can shake a stick at, and is aiming for sustainable and responsible development.

It is also a safe place to visit, with virtually no crime thanks to a strong and stable government. Which is not bad for the second smallest country in Africa. 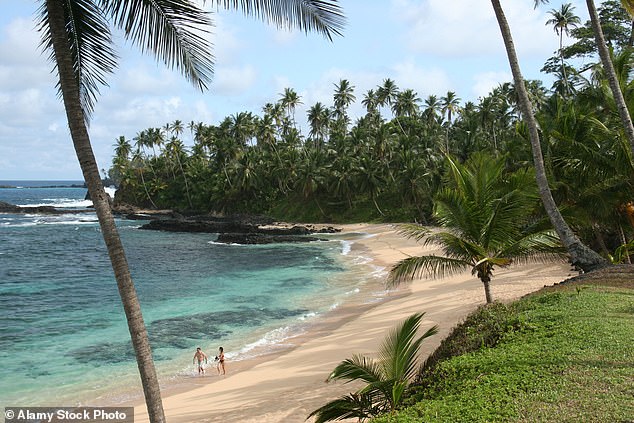 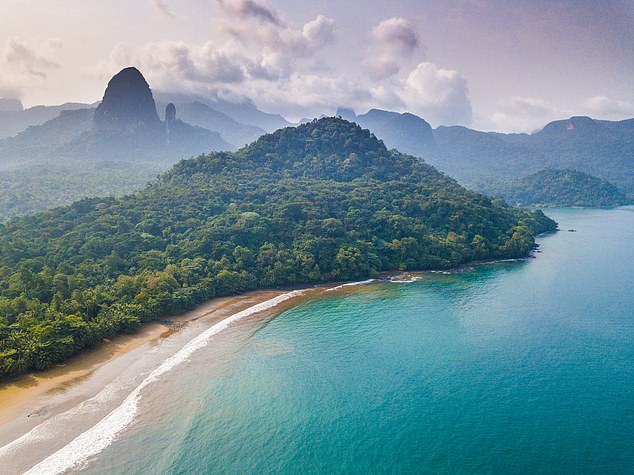 It sits off the west coast, near the equator, directly below London. The water is warm, the sun is hot and there is no jet lag. It used to be under Portuguese rule until 1975, so it seemed fitting for my son and I to fly to Lisbon for a two-night stopover at the beginning of our adventure.

Staying at Memmo Alfama Hotel, in Lisbon old town, just behind the cathedral, we took advantage of the free walking tour — and enjoyed exploring this hilly city so much that we invited our talkative guide and his girlfriend to join us for lunch. As he told us, ‘Lisbon is like a game of Tetris, played with buildings.’

Next morning, we flew to Africa, landing in Sao Tome— the larger of the two islands that make up this country — for a couple of nights relaxing by the pool and beach of Hotel Omali.

Driving round with local guide, Daniel, we bought coconuts from roadside sellers, watched locals wash laundry in rivers, and learned that all islanders are descended from slaves brought over by the Portuguese. It was an eye-opening introduction to Africa’s brutal past and present. ‘I am not owned by the past. I am more interested in the future,’ said Daniel.

Principe, with a population of 7,000, is smaller and prettier than Sao Tome. Coming in to land after a 30-minute flight, we saw its jungle-covered hills and land edged with soft beaches. It seemed remarkably unspoilt.

Tourism has only taken off in the past few years. To keep visitor numbers down, there is just one flight a day to Sao Tome from Principe, on a small plane — a deliberate ploy to encourage sustainability.

We sampled all three of the main hotels on Principe. Bom Bom Island hotel is on a tiny splinter of rock, 100 metres from the northern edge of Principe. 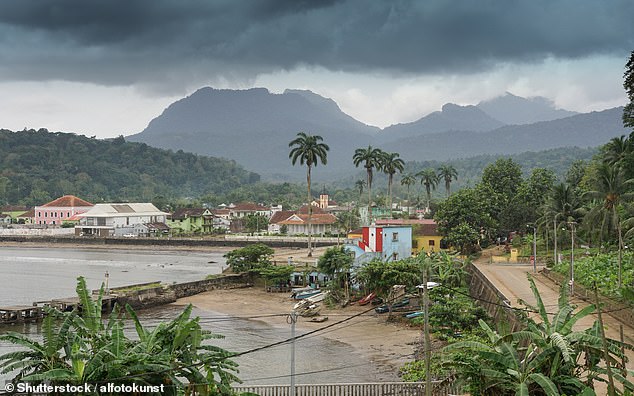 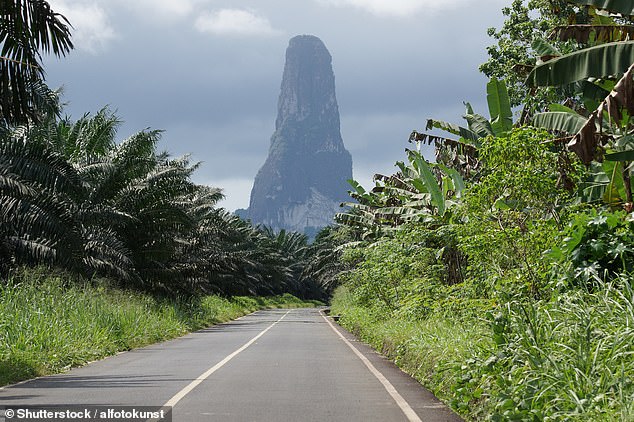 Behold Pico Cao Grande, a 1,200ft-tall needle-shaped rock that rises out of jungle on São Tomé 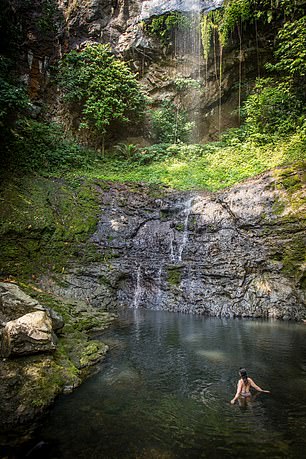 Pipi Waterfall on Principe, which can be reached via one of the island’s many walking trails

It is named after the sound of waves rolling onto shore and has beachfront bungalows perfectly positioned so you can roll out of bed, step onto soft sand and go for a morning swim while looking out for low-flying parrots.

Chaplin, an African grey parrot, lives at the hotel. She was caged once, until her owner released her to the wild. After a few weeks away, she returned, spending most days hanging out with her human friends and some lucky guests.

After taking boat trips along the coast, exploring gorgeous empty beaches and snorkelling in clear waters, I can see why Chaplin never wanted to leave. Roca Sundy is an old plantation owners’ house, located inland, that has been turned into a boutique guesthouse, with great views over the valleys below.

We met up with local resident Sandra, who showed us round the hotel grounds, where she lives. Roca Sundy is situated in a sleepy village, complete with schools, bakery and tiny chocolate factory.

Strolling round a nearby ruined hospital, now converted into a high-rise shanty town, we found ourselves in a house belonging to another local, Sheira. She runs a restaurant from her front room, feeding tourists grilled fish while her grandchildren play at our feet, or listen, fascinated by our accents. 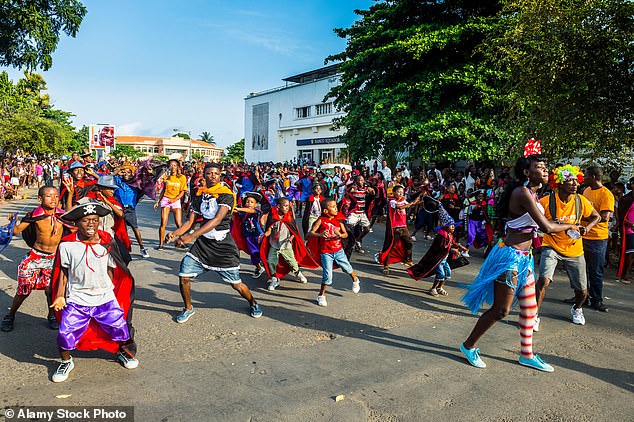 That evening, sitting outside the hotel, high above the valley, we listened to parrots singing in the treetops as the sun set, and enjoyed the local, jackfruit-flavoured tipple. It was the perfect way to prepare for our next adventure — turtles.

We had seen their nests on the beaches, each clutch of eggs marked by a painted stick in the sand. Our guide cheerfully admitted that in the past he had caught turtles and eaten their eggs. Not any more. These days they are worth far more alive than dead, as the few tourists there are will happily pay to see them.

Walking along the starlit beach, we stepped over hundreds of crabs and watched three huge green turtles — each one the size of a wheelbarrow — hauling themselves up the sand. It was fascinating. It takes them hours to find a spot, dig their nests, lay their eggs and return to the sea. A perfect example of the locals’ favourite phrase: ‘Leve, leve.’ (Slow, slow.)

Our final night was in a tented villa at Sundy Praia, at a whopping £800 a night — more than twice the price of the other hotels.

Proud of its eco credentials and use of local materials, it takes glamping to new heights, with enormous suites of rooms under canvas. Our bath was carved from solid rock and, apparently, weighed over a ton. It was a grand finale as we prepared to head for home.

So, if you ever want a taste of tropical joy, just head south from London and keep on going until you hit the equator. When this pandemic is far behind us, I can think of no better place to go and celebrate the simple beauty of being alive.

Stan and his son travelled with (rainbowtours.co.uk) which offers 14 days’ half-board at Omali Lodge in Sao Tome, Hotel Bom Bom, Roca Sundy in Principe and Sundy Praia Resort from £3,135 pp.

A stop over at Memmo Alfama in Lisbon, international flights with Tap Air (flytap.com) and internal flights are also included.