When I lived in London, I never went to the Tower. A Madrileño I met claimed never to have entered the Prado. There are Cairenes, I’m sure, who keep meaning to visit the Pyramids. I know I’m not alone in often ignoring what is in my own backyard. The attractions of faraway always seem more alluring. But with the Covid crisis we have all become aware of how important it is to look for the treasure under our noses. That’s why I’m on a fishing boat heading out of the tiny Pembrokeshire port of Dale with oceanographer Richard Rees and skipper Andy, plus several excited – and slightly apprehensive – photographers and divers. The group is a little diminished to keep social distance.

Andy has been sailing these waters off the Welsh coast all his life, mostly ferrying anglers out to the rich feeding grounds 30 miles offshore. We are on a mission to see, and swim with, marine creatures that most people, including myself, associate with more distant, exotic locations. 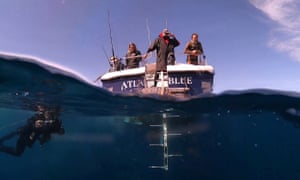 “It’s only about 80 metres deep out there,” Andy tells me as we bash through some impressive swells, “but there’s an upwelling of food and plenty of stuff chasing it.”

Almost as soon as Skomer Island has receded to a thin line on the horizon behind us, dolphins appear, streaking alongside the boat then surfing on our wake. The birds too, take a constant interest: parties of gannets, shearwaters, fulmars and storm petrels, all checking us out while keeping a wary eye on the occasional skua which could pounce and kill at any moment.

“For years I’d been working on whale sharks in the Indian Ocean,” says Richard. “But then I came home to Wales and realised what we have here is equally amazing.”

The ride out is bouncy, even on what is a settled day. Storms out in the Atlantic have left their mark in the form of big rolling swells. When we reach our final position, way out of sight of land, we switch off the engine and wallow in them. Seasickness tablets are swallowed, but only one person succumbs. Andy gets to work, throwing bits of mackerel tied to stout fishing lines overboard – no hooks involved. We wait. A trio of dolphins dart out of the waves; they seem to be grinning with pleasure, probably scooping up a free lunch. I watch Manx shearwaters skim the waves, one of the great sights of the open sea around Britain, which is home to the vast majority of the world population. The treasure, as I said, is sometimes under your nose. 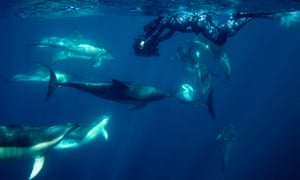 Meanwhile, under Andy’s nose is a different kind of treasure: a stinking fish soup in a bucket that he ladles steadily overboard. When that elicits no response, a wire basket is filled with fish and hung at four or five metres’ depth. Still nothing happens. A couple of hours pass.

I ask Richard about the ethics of chumming. Isn’t it bad for the sharks? He nods thoughtfully. “Feeding them regularly and in one place can certainly alter behaviour, but we’re never in precisely the same spot, our trips are irregular and we are only offering them a taste, not a meal. Plus, these are blue sharks, porbeagles and makos, which are open-ocean species that roam across vast distances – very different from sharks that are resident in one place.”

Our stomachs have now settled into the groove so we eat and have hot drinks (everyone’s supplies kept carefully separate). The rich birdlife constantly entertains. Andy mixes a bucket of pilchard oil and molasses: “Irresistible. Never fails.”

But it does. Nothing happens. Andy is unperturbed. He has more tricks up his sleeve. A cheap electric toothbrush is switched on and sunk inside the fish basket, sending a stream of enticing vibrations outwards into the dark clear water. 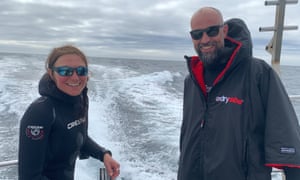 And then one of the fishing rods twitches. The surface float turns, bobs and goes under. Suddenly the rod bends right over and the line is tearing out of the reel. Andy grabs it and applies the brakes. “Let’s see if I can bring her back.” It’s not easy. There is no hook, only a tug-of-war between man and sea creature over a morsel of food. By now some of us are scrabbling to get our snorkelling gear on. I’m struggling into my wet suit when the cry goes up. “I saw it!”

There’s a flash of blue in the water and a glimpse of the familiar triangular dorsal fin of a large shark. I grab my mask and snorkel, crouch down on the transom and slide gently into the sea.

The colour and clarity of the water is a surprise: deep shafts of sunlight rippling downwards into darkness, speckled with lumps of fish that we have thrown overboard, and my deathly-white feet … I’ve forgotten my fins. To my unpredatorial eye, they look a lot like a brace of dying mackerel, making their last twitches. Even worse, there is a genuine bit of dead mackerel just hanging in the water a couple of metres away. 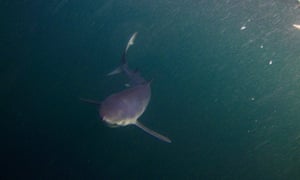 And then, from far down below, comes a sinuous movement. The shark swims up in lazy curves, snapping up the mackerel tidbits with delicate precision. Closer and closer. The creature’s colour is a startling petrel, hence the name blue shark. Each piece of fish is taken and I know now for certain that it’s heading my way. I stop breathing. The creature must be the same size as me. It grabs the mackerel nugget with the side of its mouth, ignores my unpalatable feet, and turns away.

Other swimmers get in the water and I get out. With fewer swimmers, the animal is less likely to be spooked. Sure enough, the shark returns for several more passes and then, as quickly as it appeared, it is gone, replaced by a pod of dolphins which shoot past, thrilling those who have stayed in the sea long enough. Eventually everyone gets out and the babble of excited chatter swells. Andy starts the engine. The tide will not wait and we need to return. 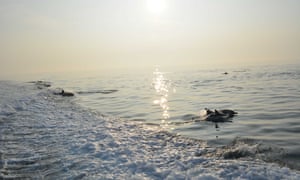 The sun comes out and I sit on the gunwale watching the dolphins blast through our wake. Richard admits he had given up hope of a shark and says he’s disappointed by the non-appearance of whales. I am asking myself whether, had we not had that shark encounter, would I consider the trip worthwhile? A dolphin suddenly booms out of a wave, not five metres away, followed rapidly by a smaller one. Yes, I tell myself, it has definitely been worthwhile. The kind of experience I might have associated with South Africa or the Baja peninsula has been had right on my doorstep.

• The boat trip was provided by Celtic Deep, which runs regular trips (July-October) from Dale in Pembrokeshire at £130pp. Maximum group size is six, with a zone system on board to maintain separation. Sanitised equipment can be rented. Accommodation in Milford Haven was provided by Quality Unearthed, which has floating cabins for two on the waterfront from £80 a night. More information at visitpembrokeshire.com