Scotland is rich in wild histories. Ruins, relics and the stories behind them are found throughout its more isolated landscapes − forgotten, overlooked and often hidden by dint of sheer geographical remoteness.

There was one particular journey and historical narrative I had wanted to follow for years. The Jock’s Road pass involves a traverse through empty glens and across the tops of desolate, whale-back mountains. I would tramp it north to south, leaving the chocolate-box Highland village of Braemar and breaking trail for 20km over high moorland, completing my route amid the steep crags and wooded hillsides of Glen Clova. Although possible to walk in a day, I opted for a leisurely pace, staying the night at one of Scotland’s most unusual mountain shelters along the way.

The route had been created by centuries of human and animal footfall. I hoped to feel something of the weight of that passage. To know the ritual and the routine of the drovers who had once used it for bringing cattle hundreds of miles to market: a practice passed through tens of generations, but now forgotten. 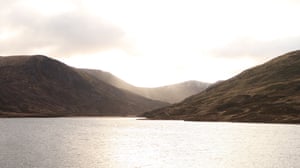 After walking south for an hour from Braemar, into the wide glacial sweep of Glen Clunie, then pounding out 5km on a rough track along Glen Callater, it was a relief to reach the small compound of buildings at the Callater Stables. The sturdy structures felt strangely out of place in such wilderness, occupying an otherwise blank space at the end of a thin loch with tawny hillsides rising around them. I took time to rest from the morning’s walk, brewing tea and sitting with my back against one of the buildings.

This was once a resting point for the drovers: their last respite before the most difficult section of their journey: the push up on to the wind-strafed high ground of the plateau. A bothy still exists among the buildings, a thick-walled converted stable with separate living and sleeping spaces.

Moving on to the upper reaches of Glen Callater felt significant, as if I were crossing a marker point as the landscape became rougher, more elemental. The surrounding slopes were now closer, and the vistas of the early part of my walk were replaced by narrow sightlines: sharp, overlapping angles and the falling diagonals of converging ridges. Colours had also changed: the yellow-green of moor grass had ceded to the purple-browns of old heather and the deep black of peat hags.

To bring cattle through this terrain and over the mountainous expanse required skill and fortitude. “Knowledge of the country had to be extensive and intimate, while endurance and ability to face great hardships were essential,” wrote the historian ARB Haldane in his 1952 book, The Drove Roads of Scotland. The men would sleep in the open air with their cattle, fully exposed to the mountain weather and wrapped only in blankets, or (more commonly) just the plaids they wore during the day.

Provisions were limited to what could be carried. Walter Scott described the typical drover’s diet as just “a few handfuls of oatmeal and two or three onions, renewed from time to time, and a ram’s horn filled with whisky”. For additional sustenance, the drovers would bleed their animals, mixing this with oatmeal to make black pudding. It felt a far cry from my dehydrated, high-energy trail food. 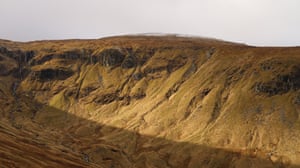 Once on the high ground of the Mounth plateau, a recalibrating of senses was needed as I walked into thick cloud. Trying to find landmarks for a compass bearing was hopeless, but hearing and touch became heightened to compensate. The wind howled, the cold bit harder.

I was glad to be journeying in late summer, remembering the ominous description of the route in winter I had read in the Scottish Hill Tracks guide: “At that time of the year the path over the plateau is likely to be covered by snow and completely invisible for several months.”

Indeed, it was extreme weather on New Year’s Day in 1959 that condemned the five members of a Glasgow hill-walking club. Attempting the long crossing through an atrocious storm, the men were unable to reach the relative safety of Glen Clova on the other side, and one by one succumbed to Arctic-like conditions – at the time, Britain’s worst mountaineering disaster. The tiny refuge I hoped to stay in, known as Davy’s Bourach, was built a few years later – in memory of the walkers – as an emergency shelter just before the long descent towards Glen Clova.

Knowledge of the tragedy still renders Jock’s Road and the mountains that surround it with a poignant beauty. The landscape here differs from the pinnacle peaks of Scotland’s west coast. Instead, the broad expanses of high-level moor, sweeping corries and gusty summits hold their own harsh, and often solemn splendour. 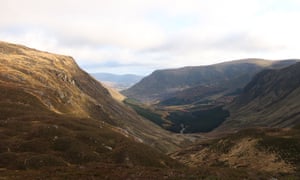 It has certainly been a place that many have considered worth fighting for. In 1885, having made his fortune as a sheep grazier in Australia, Duncan Macpherson returned to his native Scotland and purchased the Glen Doll estate. He immediately tried to block access onto his land, but was met with direct action from the newly formed Scottish Rights of Way Society (now ScotWays), who wanted to keep the route open. The dispute went from the hillside to the House of Lords, bankrupting both parties but eventually being decided in the society’s favour in 1887. The way was named the Jock’s Road after Jock Winter, a local shepherd who fought alongside the Scottish Rights of Way Society. The ruling set a legal precedent and prompted a series of legislative measures which, over the following century, were to lay the foundations for Scotland’s modern-day exploratory freedoms.

On the highest part of the walk, the wind intensified, the mist morphing into fast-flying rain bullets. I was following a well-established path of inky footprints, hood up and head down, so I almost missed the entrance to Davy’s Bourach shelter, a tiny door, postbox red, set into a wall of boulders. 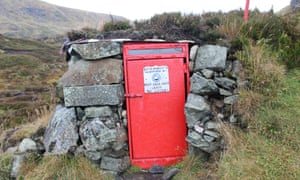 Inside, the small space was dark and too low to stand up in, but big enough to house a small group of walkers in the worst of conditions. I busied myself with a familiar routine. I hung my sodden clothes from the roof beams, heaped on the extra layers from my rucksack and began heating pasta on my stove. It was a cold, but exhilaratingly wild night in the shelter. Rainwater dripped in through gaps in the roof (though it has since been renovated) and I fell asleep listening to the horror-movie chuckles of ptarmigan as they roosted outside.

The next morning, dawn was exactly the same as dusk – as if only minutes, not a night, had elapsed. I was still within the clouds, the rain heavy and directionless. Beyond the shelter I crested a small ridge as the path dropped through a gap by a waterfall. I tried to imagine the drovers at this section. The route was so narrow that their animals would have moved in single file, a long procession patiently cajoled, the dark edge of forestry finally in sight.

The Navvies’ Graveyard, near Kinlochleven 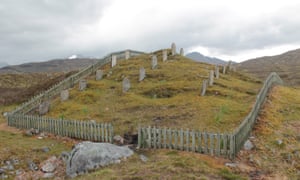 At the start of the 20th century, in a remote glen in the west Highlands, thousands of navvies worked on the huge hydroelectric scheme near Kinlochleven. The dangerous work meant that many of the labourers died during the construction. They were laid to rest in an improvised burial ground that is below the steep walls of the reservoir. 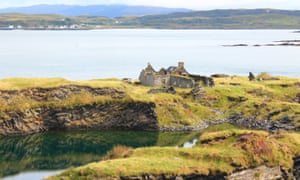 Commercial mining of slate once took place here. However, a series of natural and economic calamities, beginning with a storm surge of epic proportions in 1881, flooded the quarries, rendering them unworkable and the area destitute. The population was forced to leave and the island was abandoned. 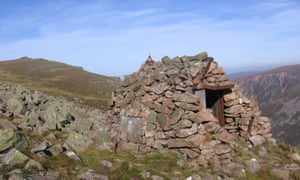 At over 3,000 feet on the steep western flank of Strath Nethy, the El Alamein hut was one of three high-level shelters on the Cairngorm plateau. Along with the other two shelters it was implicated in the 1971 Feith Buidhe mountaineering disaster (when five school children and their instructor died in a blizzard looking for one of the shelters) and was ordered to be demolished. Unlike the other two though, it was never dismantled and the derelict structure can still be found.

Inchkeith Island, Firth of Forth 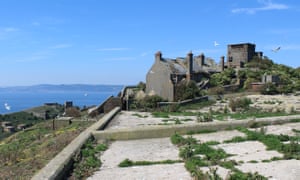 Inchkeith Island has served a multitude of purposes over the centuries: fortress, garrison, farm, lazaretto, prison and religious settlement. It was even the venue for a bizarre linguistic experiment, when King James IV supposedly exiled two infants to Inchkeith in the care of a woman who was deaf and non-verbal, believing that whatever language the children acquired would be mankind’s innate, God-given tongue. In 1779, it was also the staging post for an attempted invasion of the port of Leith led by the infamous naval commander John Paul Jones of the Continental Navy of the American Colonies.

The Glen Loin Caves, Succoth
The maze of fallen rocks on this Argyll mountainside was once the focal point of a sporting counterculture. For almost two decades from the 1920s, groups of working-class young people, mainly from Glasgow, congregated around the caves to climb the huge rock walls of the Arrochar Alps.

• Patrick Baker is the author of The Unremembered Places: Exploring Scotland’s Wild Histories (£14.99, Birlinn), which is shortlisted for the Boardman Tasker Prize for Mountain Literature 2020. Order a copy for £13.04 from The Guardian Bookshop