The 40 coolest neighbourhoods in the world for 2020 revealed: Esquerra De L’Eixample in Barcelona tops the list, while Dennistoun in Glasgow is ranked EIGHTH

A neighbourhood in the east end of Glasgow has been named the eighth coolest in the world in Time Out’s annual survey.

Dennistoun is the only UK neighbourhood to make the top 20.

More than 38,000 residents of cities across the world were surveyed for the list, questioned on where they most loved spending time around their city. 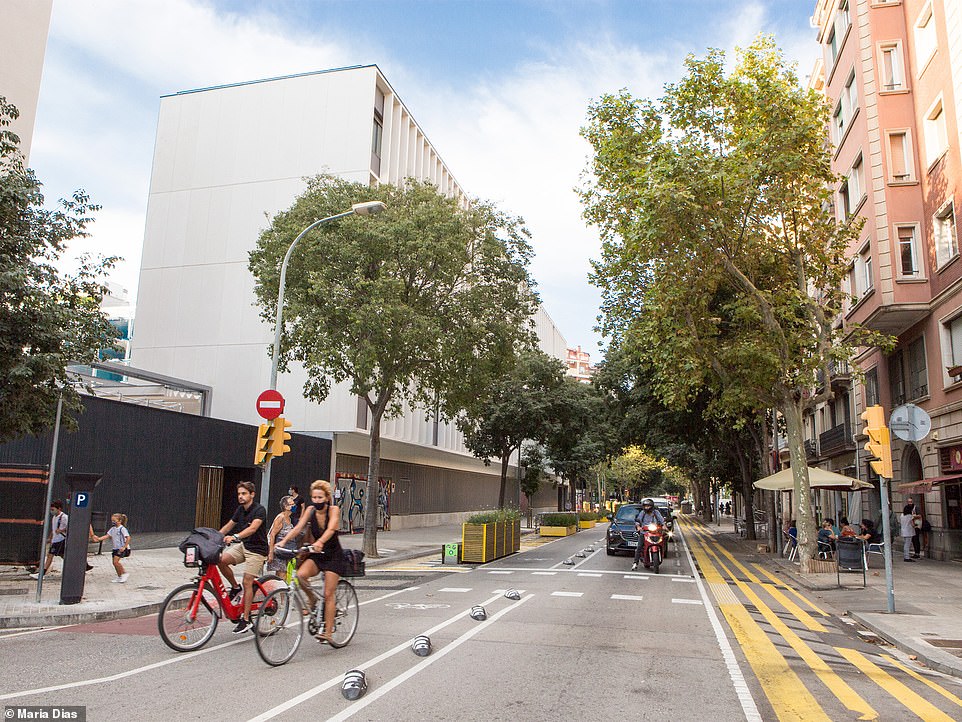 Esquerra De L’Eixample in Barcelona, which has been named the coolest neighbourhood in the world by Time Out. According to the guide, it achieved the coveted spot thanks to its ‘tight-knit community, great local businesses and LGBTQ+-friendly culture’. It added: ‘During lockdown, locals gathered together en masse for the pop-up Hidrogel Sessions, where residents held dance parties from their balconies in fancy dress to keep community spirit up during this time’ 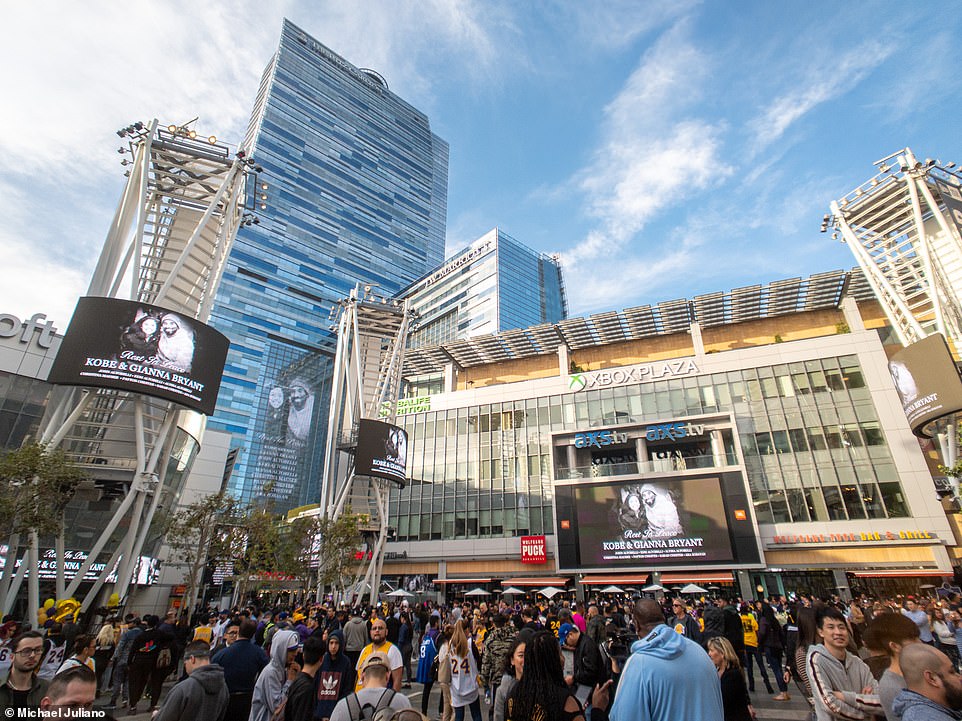 According to Time Out, second-placed Downtown LA became a ‘pivotal, central location for peaceful Black Lives Matter protests and demonstrations, making it the place where the city could express its soul and solidarity’. It added: ‘The L.A. Live plaza was dedicated to the commemoration of Kobe Bryant, with locals lighting candles and flowers to show their love and support for the LA legend’s life’ 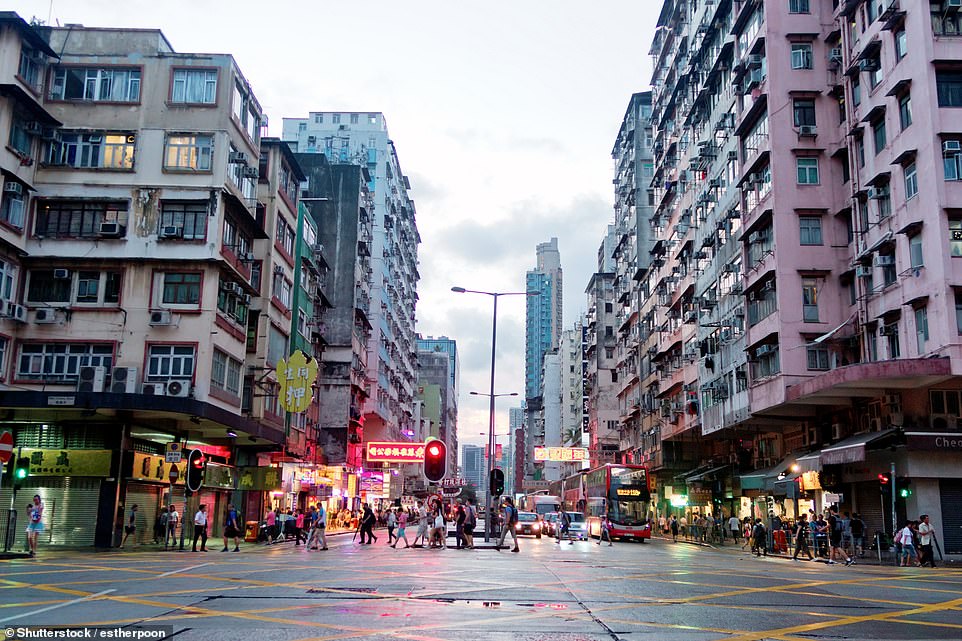 Third-placed Sham Shui Po in Hong Kong has been reinvigorated by young creatives, said Time Out. It explained that usually, Hongkongers ‘venture to the neighbourhood on the weekends to discover new artists, interesting cuisine and to shop for vintage and exciting designer clothing as well as traditional textiles’

This year, Time Out factored in community spirit as well as food, drink, nightlife and independent culture in compiling the ranking of the 40 coolest neighbourhoods.

Dennistoun was described as feeling like a ‘secluded island in Glasgow’s East End’, with an influx of students having altered the demographic of the historically working-class neighbourhood in the past decade.

Said to have a ‘sense of independence unlike any other corner of this city’, community initiatives including the Zero Waste Market – a refill grocery shop which prepared food boxes during lockdown – and Alexandra Park’s Food Forest were praised, along with coffee shops, pubs and an art gallery.

Barcelona’s Esquerra de l’Eixample was named the coolest neighbourhood in the world. 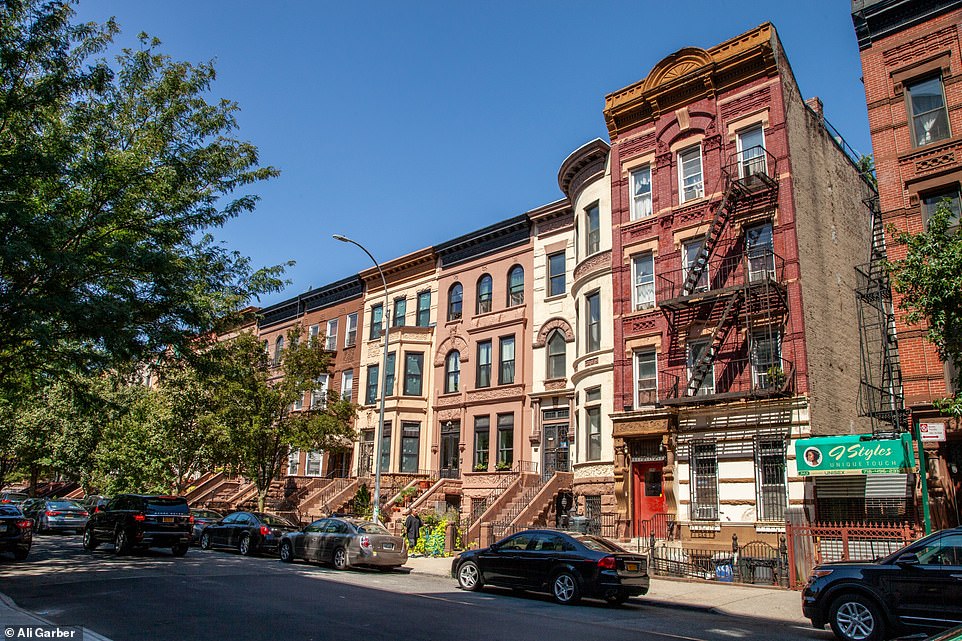 Bedford-Stuyvesant, which came fourth, may look like a snapshot of the past with its brownstones and leafy streets, but Time Out said it had become New York’s ‘greatest future thinker, serving as the main hub for Black Lives Matter protests’. The Guide added that during lockdown, locals were kept entertained by the Billie Holiday Theatre, which organised socially-distanced theatrical productions 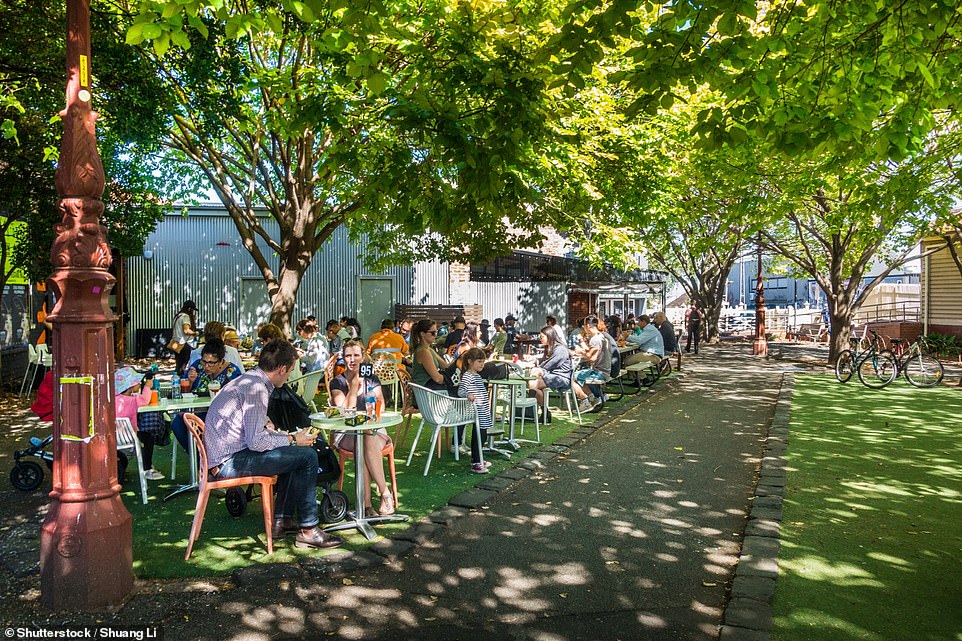 Fifth-placed Yarraville in Melbourne is where ‘creative locals (and an incredible food scene) have kept spirits high through two tough lockdowns’, said Time Out. It explained: ‘Local artist Lee Smith-Moir painted ‘happy signs’ on walking tracks and skater Belle Hadiwidjaja has been roller-skating through the streets in different costumes, keeping families entertained on their daily walk’ 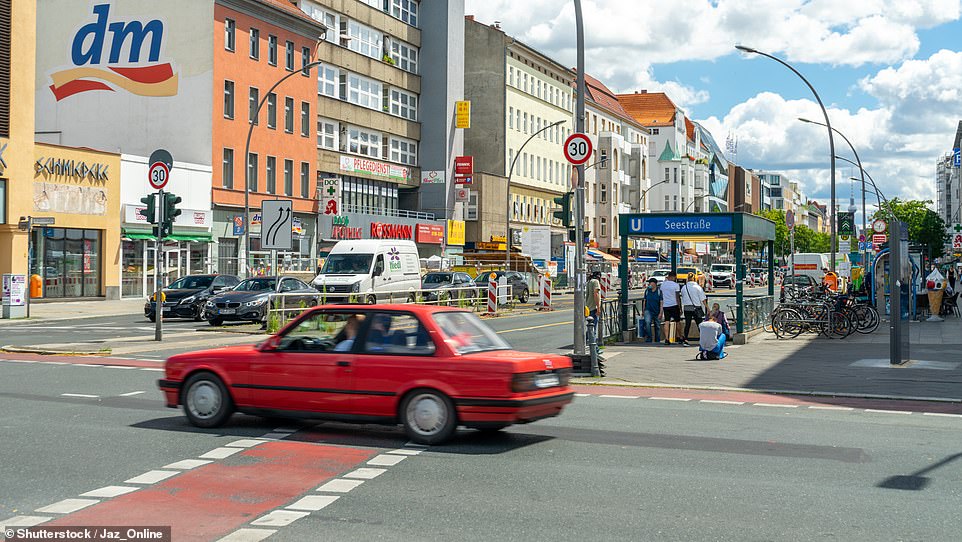 Time Out described sixth-placed Wedding in Berlin as a ‘multicultural, multigenerational community that has stayed extremely loyal to local businesses, including its longstanding restaurants such as Asia Deli on Seestraße. It explained: ‘The community has also welcomed new additions like vegan-friendly Italian Sotto, Taiwanese restaurant Cozymazu and Michelin-starred Ernst’ 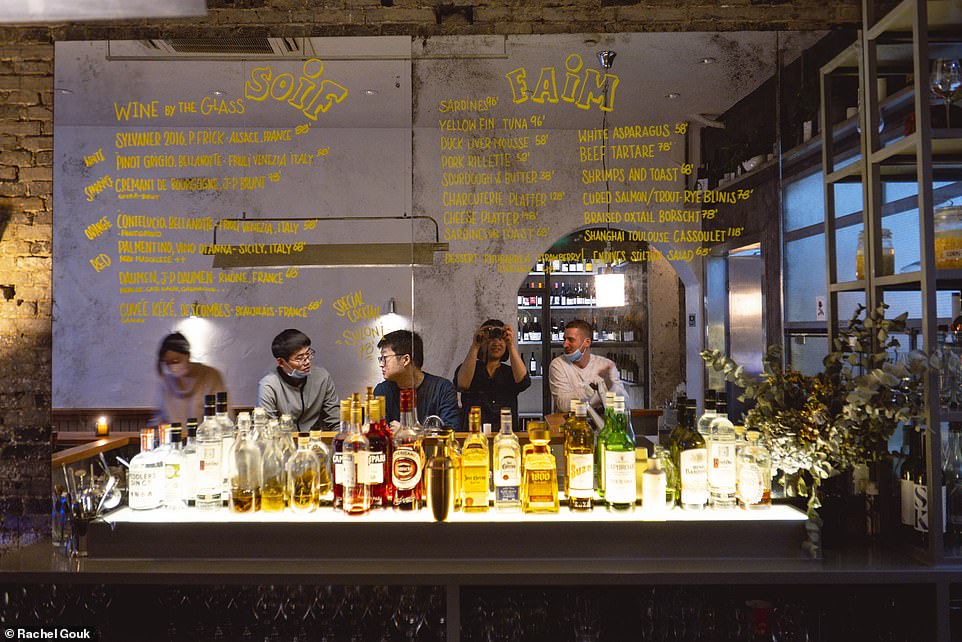 Seventh-placed Shaanxi Bei Lu is a ‘buzzing destination’ and a hub for Shanghai’s LGBTQ+ community thanks to local lesbian, bi and trans bar Roxie, said Time Out. It added: ‘Not only that but the neighbourhood has innovative new cafés, bars and restaurants including petite natural wine bar SOiF [pictured]’

It was said to have shown ‘incredible community spirit’ in 2020, organising events such as the Hidrogel Sessions, in which neighbours co-ordinated mass dance parties on their balconies during lockdown.

Dublin’s Phibsboro came 27th on the list while Soho, London, was 31st. 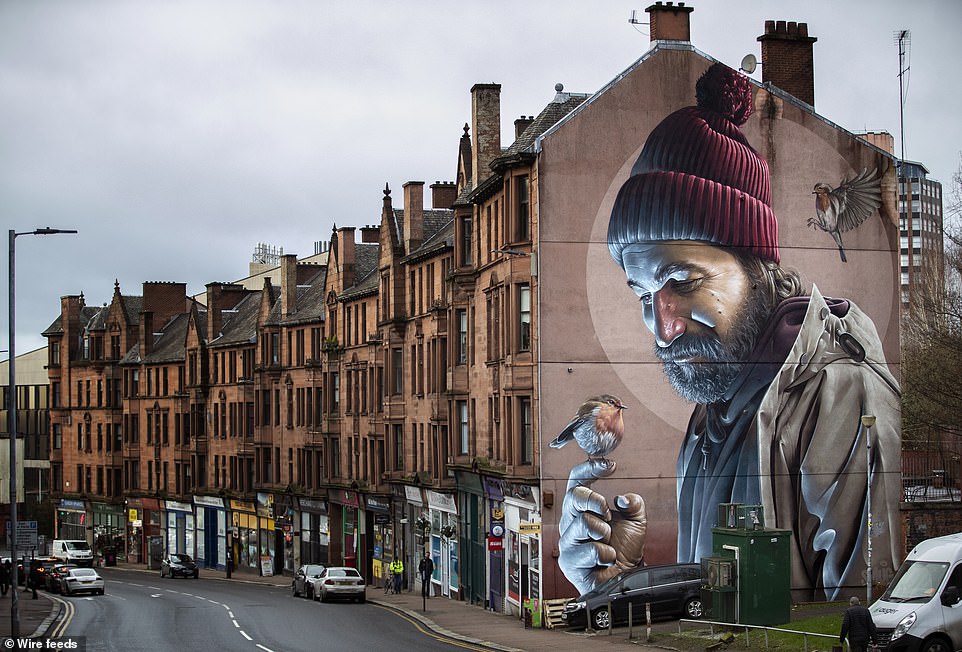 According to Time Out, young students have ‘breathed new life’ into Glasgow’s Dennistoun area. It added that the neighbourhood, which came eighth in the ranking, was ‘strengthened by initiatives like the Zero Waste Market – a refill grocery shop for boxes of essential foods – and Alexandra Park’s Food Forest, where locals of all backgrounds meet to plant and grow for a more sustainable future’ 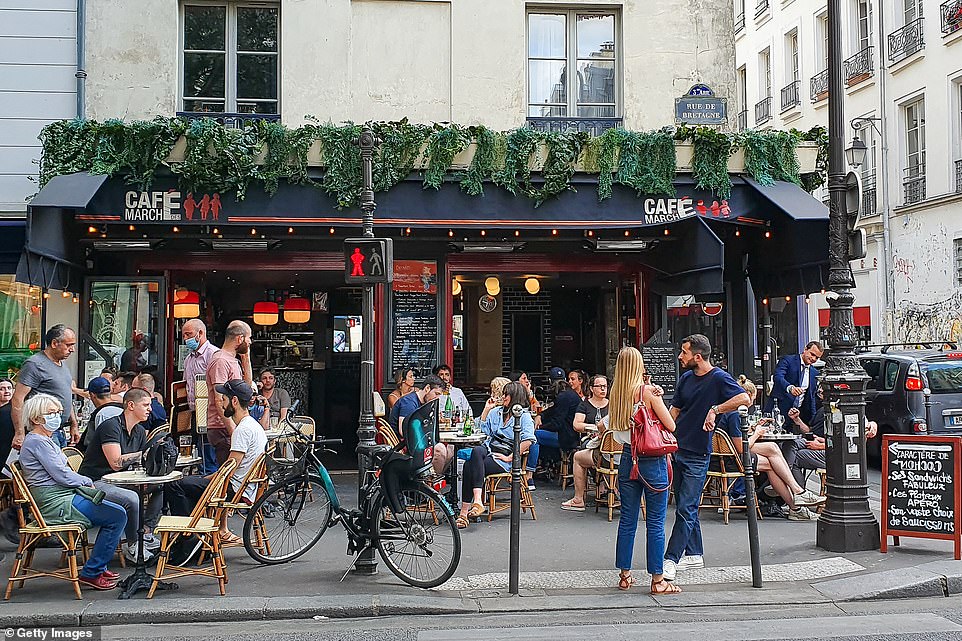 Less touristy than the main Marais district, ninth-placed Haut-Marais, said Time Out, draws ‘foodies with upscale restaurants set within the historic walls of the Marché des Enfants Rouges’. It also added that visitors ‘are set for culture with world-leading contemporary art galleries’ and that at night the area is ‘alive with cocktail bars such as Little Red Door, Bisou and Candelaria’

According to Time Out, 10th-placed Marrickville is ‘a true melting pot of Portuguese, Vietnamese, Italian and Greek migrants who have helped cultivate the area’s exciting food scene making it one of Sydney’s most exciting places to wander and explore’. It explained: ‘The once-industrial corner has been transformed by its resident artists and LGBTQ+ community into one of Sydney’s most desirable postcodes’

James Manning, International Editor of Time Out, said: ‘Glasgow is a fantastic city with cutting-edge culture and nightlife, and right now Dennistoun is at the cutting edge of the city’s cool, with independents popping up and artists brightening up the winding streets.

‘We were really blown away by the amazing initiatives that businesses and locals started at the beginning of the pandemic – it showed there was real heart in the neighbourhood.’

He added: ‘With global travel in disarray, this year our annual list of the world’s coolest neighbourhoods is less about planning your next trip and more about celebrating the hotspots that are pointing the way forward for city life.

‘In tough times, neighbourhoods are more important than ever – and these are places where the soul of the city is on full display, thanks to independent businesses, local culture and community initiatives.

‘Consider this list a worldwide shout-out to the strength, spirit and resilience of city-dwellers.’