One deep midwinter evening by the River Ouse, I sat down on a fallen tree trunk and watched the moonlight sparkle on the icy grass. I was trying to remember a poem:

The owl, for all his feathers, was a-cold
The hare limp’d trembling through the frozen grass
And silent was the flock in woolly fold

Something made me turn and I saw a fox standing right behind me, staring intently. We both stayed motionless for several thumping heartbeats, then the fox sprang. To the side, luckily. And bounded silently away.

Are there any wildlife encounters better than winter ones? The bare trees, hostile weather and cold, low light all sharpen the senses and add to the drama. No wonder Keats was inspired. Here in the UK there are so many experiences to be had, and although I’ve mentioned particular locations for each species, there may be an opportunity nearer to you.

And don’t forget wildlife webcams, a great lockdown alternative: on long dark winter evenings, there is nothing better than watching bears hunting salmon in an Alaskan river. 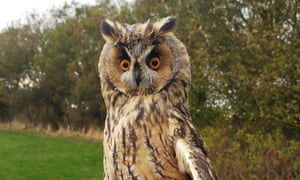 November is a great month to get out and see birdlife as winter visitors are arriving, sometimes in vast numbers. The entire east coast of Britain receives migrants from Europe, but the East Yorkshire coast and Humber estuary are particularly busy, with flocks of starlings, and sometimes lapwings coming across from Europe and forming impressive murmurations.

On the grasslands around Flamborough Head, November sees the arrival from Scandinavia of long-eared owls, joining their short-eared cousins who came over a month earlier. The short-eared likes to hunt for voles in the daytime, especially on rough grasslands and coastal salt marshes all along the east coast.

Winter at Flamborough offers moments when nature amazes: more than 30,000 redwings can arrive on a single winter’s day. In October 2015, nearly 10,000 goldcrests turned up one dawn: tiny birds, each weighing less than a 50p piece, had flown almost 500 miles from Denmark.

Having an expert along transforms your experience – when you can get out again. Yorkshire Coast and Nature does small-group one-day birdwatching trips at Flamborough for £60pp, as well as bird photography experiences, and they run every month.

Coasts all over Britain are the winter home of curlews, other wading birds and even kingfishers. Inland, look out for groups of fieldfares moving through gardens and hedgerows and, best of all, waxwings. Keep binoculars to hand.

Virtual fix Check out Long-Eared Owls and many other species in Montana, and the Barn Owl webcam at Thixendale in North Yorkshire. 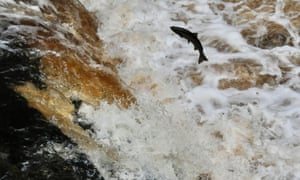 The decline of wild salmon stocks continues, but all over Britain they can still be seen taking on waterfalls and weirs to get back to where they hatched. The best runs occur when there is heavy rainfall after a dry spell, but each river has its own annual rhythm. On the River Esk on the North York Moors, the optimum period is November-December. The spots to head for are Ruswarp, Egton Bridge and Grosmont, villages all linked by the spectacular, 37-mile Esk Valley walk, running from Castleton, up in the moors, to Whitby. Further west, in the Yorkshire Dales, Stainforth Force near Settle has benefited from a five-year project to clear obstructions on the River Ribble, and is a beautiful location where you can stand close to the fish. Also worth checking are Hexham weir on the Tyne (view from the A6079 bridge or down by the water on the downstream side) and Shrewsbury weir on the Severn.

Scotland’s premier salmon-viewing location, the Falls of Shin, is at its best in late September, but fish can be seen into November. As you might expect, Scotland has the most runs: almost 40,000 salmon were reportedly caught there in 2018 (most of which were then released) compared with fewer than 8,000 in England and Wales.

The Salmon Viewing Centre, near Selkirk on the River Ettrick, has a cafe and a distillery nearby as well as a small visitor centre where, via an underwater camera, you might get lucky and watch the fish gathering before tackling the fish ladder. 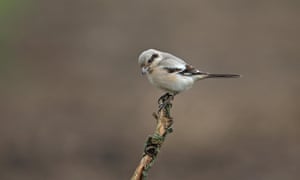 One of our rarer winter visitors is this voracious predator, familiar to African birders: the great grey shrike has been known to kill young stoats and even toads (it impales them on thorns and strips off their poisonous skin). The best spots to see them are Bishop’s Dyke and Holm Hill, both near Brockenhurst in the New Forest. Shrikes tend to sit on prominent vantage points so are not hard to spot, if they’re around.

Watch out also for hen harriers, golden plovers, fieldfares and redwings. North of Holm Hill is Blackwater Arboretum, home to some fine specimen trees, including giant redwoods and Douglas fir. Both hawfinches and crossbills are found here, often in treetops. Their diet is heavy on dry seeds, so they need to drink regularly, and sometimes come down to sip from puddles, often in the same spot from one year to the next – that’s the moment to get a good view. For more information see Hampshire Ornithological Society. When lockdown lifts, Wild New Forest runs Covid-aware guided walks from £10pp (under-10s free). 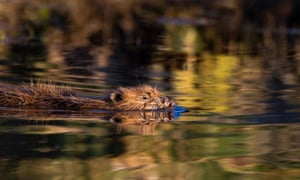 It is an unfortunate measure of beavers’ success that Scotland has started culling them: 87 were killed in 2019, and a further eight were captured, convicted and transported to England. The prime spot in England remains the River Otter in Devon, but watch out for some new contenders: the Forest of Dean, Holnicote in Somerset, and Cornwall, where the Wildlife Trust has made an excellent film about their potential benefits and problems.

Beavers are being reintroduced at Woodland Valley Farm near Truro, and at Cabilla Manor on Bodmin Moor. Despite recent depredations, Scotland still has the largest populations – around 450 in the Forth and Tay catchment.

Our other water-loving mammals, the vole and the otter, are also worth seeking out. When lockdown lifts, the appropriately named Water Rat pub in Ripon is a good vantage point for watching otters on the River Skell on a quiet day.

So it’s beavers on the Otter and otters at the Water Rat, but I’ve failed to find a place to watch water rats that has beaver in the name: we will have to settle for the Cromford Canal, a site of special scientific interest in Derbyshire. 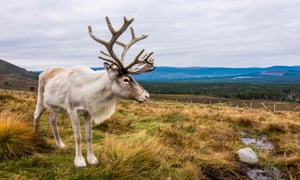 These supreme winter survivors were hunted to extinction in Scotland some 800 years ago, but reintroduced by an enterprising Sami herder called Mikel Utsi in 1952. He had spotted that for reindeer, the Cairngorms had the right ingredients for a desirable homeland: bitterly cold winters and plenty of tasty lichen. The herd has grown since then to around 150 individuals. Utsi used to walk up to visit them every day, and when there are no lockdown restrictions visitors can book (adult £3.50, child £2.50) to join in this routine, which is still observed today. The Cairngorms is a unique winter environment, well worth exploring with a guide. For day walks try Arc Guiding and Wild Alba, and Wilderness Scotland for multi-day trips.Virtual fix Most webcams are of captive reindeer, but if you want something wilder, try Bear Watching Transylvania or polar bears from Canada. 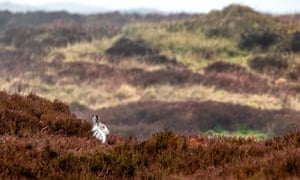 Britain has two species of hare: the brown and the mountain, the latter being one of a few animals that turn white in winter (another is the stoat). To see mountain hares you have to head to Cairngorm or the Peak District, particularly Derwent Edge and Ladybower Wood.

Northern Ireland has a sub-species of mountain hare, the Irish hare. One rather unexpected place to spot them is Belfast International airport, where researchers once counted 48 animals in a 90-minute period. There is a good ridge walk along the Black Mountain, overlooking Belfast, also good for spotting red grouse. Numbers of brown hares in England and Wales are much reduced in recent years but there are some strongholds: Charlecote Park in Warwickshire has good populations, as do the Yorkshire Wolds.

Virtual fix Hares don’t lend themselves to webcams, but here is a live webcam for stoats and weasels run by Robert E Fuller, the wildlife artist in Thixendale in the Yorkshire Wolds, also a stronghold of hares. And the Wildlife Trust streams a live webcam for badgers from Cumbria. 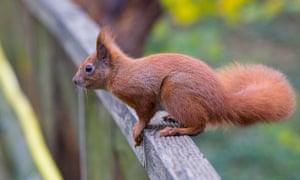 Before Brexit and Covid, it was customary to blame bankers for many of our current ills, and sure enough, they are responsible for the decline of the red squirrel. In 1876, a banker called Thomas Brocklehurst released a pair of American greys into his Cheshire garden and started a craze for populating gardens and parks with what were seen as charming novelties. We all know how that turned out.

Fortunately, there are signs of the tide turning: pine martens are making a bit of a comeback, and they swear that greys are tastier than reds. Bouldnor Forest near Yarmouth on the Isle of Wight is an extensive coastal woodland where, alongside the cute red squirrels, you might see crossbills and goldcrests. Don’t miss the nearby beach walk – for fossils and sightings of the reintroduced white-tailed sea eagle.

In the north, premier red-spotting places include Cumbria – especially Smardale Gill near Kirkby Stephen and Wreay Woods near Carlisle – and Hauxley and East Cramlington Pond in Northumberland. Widdale, in the Yorkshire Dales, has a 2½-mile red squirrel viewing walk. Scotland is home to an estimated 140,000 reds (down from several million a century ago). Loch of the Lowes near Dunkeld has feeders for closeup observation.

Virtual fix Here’s a live webcam from Czech Republic of a bird feeder that often attracts red squirrels, too. 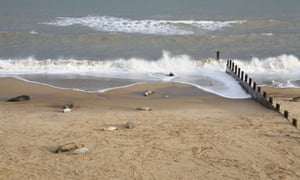 I never really got the fascination with seals – until I went snorkelling in Cornwall and one swept past me. After I’d got over the adrenaline overdose, I spotted it again, moving underwater in the kelp beds with all the agile grace that I lacked. In winter, however, a good beach walk or a boat trip is probably the best way to see them. We have two species in Britain: the common (which is not actually common) and the grey (which is larger and looks a bit more dog-like in the snout). Blakeney Point in Norfolk has the largest colony of greys in the UK, with more than 3,000 pups born each winter, though the best viewing is on a boat trip here (after lockdown, of course).

On foot, grey seals can be seen at Horsey Gap in Norfolk, Donna Nook in Lincolnshire, Pendennis Point near Falmouth and Ravenscar in North Yorkshire. The Moray Firth, north of Inverness, is home to around 700 common seals and a pod of dolphins. The best viewing location is Chanonry Point: park near the old lighthouse and walk to the shingle beach.
Virtual fix The Cumbria Wildlife Trust has a grey seal webcam. For something more colourful, the Pacific Aquarium in Los Angeles is entertaining.