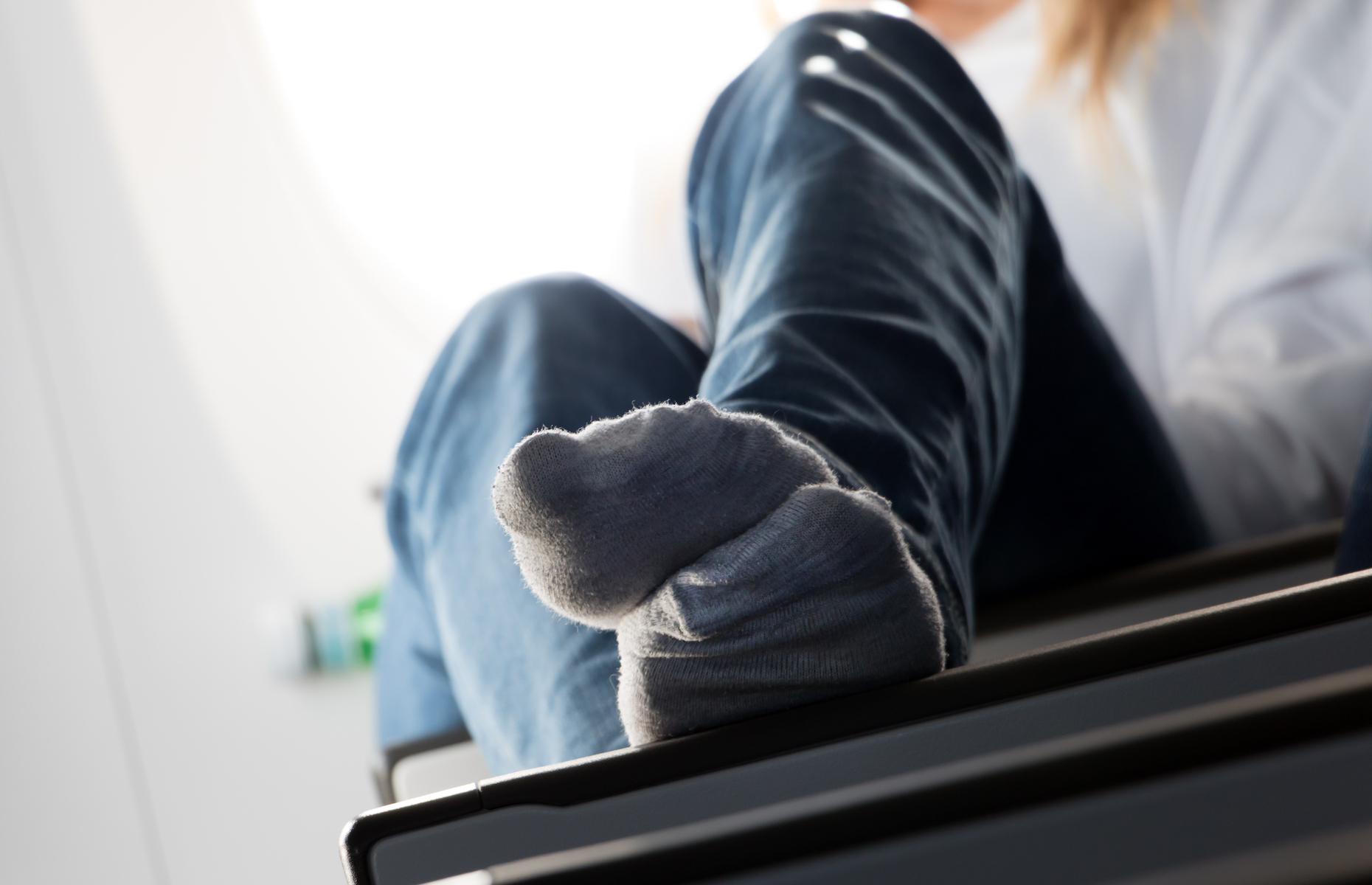 Major airports are filled with thousands of passengers, all with their own stories—some funny, some sad, some inspiring. Whether it is a stuffed animal returned to a child with its journey documented in social media images, a naked man falling through a bathroom ceiling or a family reuniting in full dinosaur costumes, here are some unbelievable but true airport stories.

A four-year-old girl left her much-loved stuffed dog RaRa at Toronto Pearson International Airport. The airport kindly returned the pet to the girl in Saskatchewan, documenting its trip on Facebook, “RaRa’s Journey through Toronto Pearson.” The way home included a ride through security and a chance to root for the Toronto Blue Jays baseball team.

On the subject of toy-animal adventures, a six-year-old boy left his beloved stuffed tiger at the Tampa International Airport. Airport employees mounted a search, found the tiger in a children’s play area and then decided to document the toy having a number of adventures, including hanging out with firefighters and napping in a hammock by a hotel pool.

When the boy’s family returned to get the tiger, the airport presented them with a photo book “detailing all of the tiger’s hijinks at the airport.”

Amanda Sapir—who identifies as “gender nonconforming. . . female and also trans masculine”—recalls getting “the most socially conscious TSA pat down ever” at Bradley International Airport in Connecticut. After scanner results came back unclear about Sapir’s gender, TSA official Darlena Thi Lac asked her how she wanted to be patted down, explaining good-naturedly, “You get to decide how you are identified.”

The funny side of airport security

Airport security is usually not a laughing matter. But Transportation Security Administration (TSA) officer Carl Revis has tried to lighten things up in his job at Los Angeles International Airport. Grabbing the microphone at security screening stations, he treats passengers to such zingers as, “It doesn’t matter what line you choose, they all lead to the same Starbucks.” Or he’ll sing a riff on airport security sung to the tune of “Hello Muddah, Hello Fadduh (A Letter from Camp).”

A little-known fact: airports sometimes employ falcons to keep other birds away that could otherwise be sucked into jet engines with unfortunate consequences. In this case, a falconer came into the airport terminal to grab a coffee and decided to impress some women by doing an impromptu demonstration, letting his bird take flight.

“What he failed to notice was the starlings resting outside on a steel beam,” an airport employee shares. The bird “flew after starlings, smoked the glass and broke its neck.”

In a Business Insider article, veteran flight attendant Annette Long reflects on unusual industry experiences. For example, she says, “I did have [other] flight attendants tell me about blood dripping from the overhead because someone was bringing in a goat’s head from a Caribbean island. That was before TSA and all their security procedures were put in place, of course.”

Veteran flight attendant Merav Richter recalls two women looking uncomfortable on a trip and later discovering that “an older man . . . had some sort of foot fetish or fascination with these two ladies’ feet, so he had crawled in under his seat and you couldn’t see him then. He was just kissing their feet and caressing and tickling their feet.” Apparently the women were “too embarrassed to talk about” the indignities they had suffered.

Six years ago, the Daily Mail reported that “a 26-year-old man has been arrested after allegedly stripping naked, falling through a ceiling into a women’s bathroom and assaulting an 84-year-old man in a bizarre rampage at a Boston airport.” Leading up to his rampage, Cameron Shenk stripped inside one of the stalls in the Logan International Airport washroom, before leaving his clothes on the floor and climbing into a dropped ceiling.

Beware the mark of Zorro

Los Angeles International Airport gets its share of eccentric personalities. Airport police received “reports of a man dressed in black with a sword and wearing a mask” in Terminal 7. The man was ordered to lie face down on the ground and was detained until the authorities decided to release him, discovering that his sword was plastic, not real. He claimed he had come to the airport in costume to pick up someone.

Following the Orlando nightclub shooting in 2016, the grandmother of 20-year-old victim Luis Omar Ocasio-Capo (pictured here) flew to the Florida city to join other grieving relatives. JetBlue flight attendant Kelly Davis Karas thought to pass around a piece of paper so other passengers could pass on their condolences. Page after page of supportive, loving messages came back.

Man with snakes in his pants

Who hasn’t wanted to stuff live snakes in their trousers and then go to the airport? Apparently a man at Miami International Airport was discovered with seven snakes in his pants, each wrapped in hosiery. He also had several small turtles. The authorities arrested the man, and his animals were confiscated by the U.S. Fish and Wildlife Service.

Life without your human is ruff!

Dogs don’t like it when their humans leave home, especially on long trips. One chihuahua decided to do something about it, climbing into his owner’s suitcase unseen as she was packing for a trip. As the bag went through security at LaGuardia Airport, scanners detected the stowaway. The woman’s husband came to the airport and drove the wily animal home.

Flying can be stressful for people. So a number of airports—from Miami to San Jose—have introduced therapy dogs, providing nervous travellers with a little unconditional canine TLC. Part of the LAX PUPs (Pets Unstressing Passengers) program, Chance, a husky mix, likes to spend his days off “lounging on beds and couches, and eating any dog cookie that comes his way.”

So, two kids go to the airport to greet their grandmother, who’s flying in. What should they do to make her feel really welcome, relieving the stress of the trip? Easy, wear inflatable raptor suits to give her a Jurassic experience. And what do you do if you are a really cool grandmother? You come out in a dinosaur suit of your own.

Whenever Courtney Payne flies home through Kansas City Airport, she is picked up by her dad, Doug. Good so far but Doug does an uber-dad thing, holding a special sign for his daughter each time, designed to create a certain amount of embarrassment. One sign, for example, welcomes Miss Oregon to Kansas City. For another pick-up, he’s dressed in an elf’s costume and the sign reads: “Santa’s Naughty List: Courtney Payne.” We feel her pain.

The explosive power of feet

Travel blogger Andre Arriaza recalls going on an American Airlines flight between Port-au-Prince and Miami, and being assaulted by a strange odor from the passenger behind him. Flight attendants started questioning the man and, fearing that he might have an explosive device, started going through his things. It turns out that the smell was from the man’s feet, so the attendants politely asked him to put his shoes back on.

Airport police are such funny jokesters

A man waiting at the airport for his girlfriend to pick him up noticed a couple of police officers with a dog, which was sniffing the area around him. “They go to walk by, and all of a sudden, the dog got close to me and sat down,” he recalls. “The cops gave me an intense look and reached under the ledge where I was sitting. All of a sudden, they pulled out a bag with a few grams of a certain illegal substance in it.”

After the passenger gave panicked protestations that the drugs weren’t his, the police laughed and explained that the bag had been placed there as part of a training exercise for the dog. Funny.

One flight attendant tells Reader’s Digest that some airplanes have a “mini-stable” in them to transport horses. If the horses start to act up, they are tranquillized to prevent them from harming people or property. In one case the tranquillizer didn’t work. “The horse did freak out, and when the handler came to take care of it, it kicked the handler and we had to supply medical first aid,” the flight attendant recalls.

Virgin Atlantic flight attendant Leah Amy says, “Of the hundreds of flights I’ve operated, I’ve had the pleasure of looking after footballers, supermodels and some Hollywood movie stars but let me tell you about my two favourite passengers EVER!”

On the flight from New York, Jack and his family had seats in the upper-class cabin. But when Jack saw 88-year-old Violet in economy in a seat directly by the toilets, he gave up his first-class seat for hers and did the long trip without complaining. And Violet realized her dream of finally being able to sit at the front of the plane.

For many people, losing some weight is a good thing. However, when one recent pound shedder went to the airport, he found the downside of weight loss. He had to take off his belt to go through security, holding his trousers up with his hands. When he was forced to raise his hands while going through the scanner, his pants fell around his ankles. “Not so much my horror story as everyone else’s,” says the exposed passenger good-naturedly.