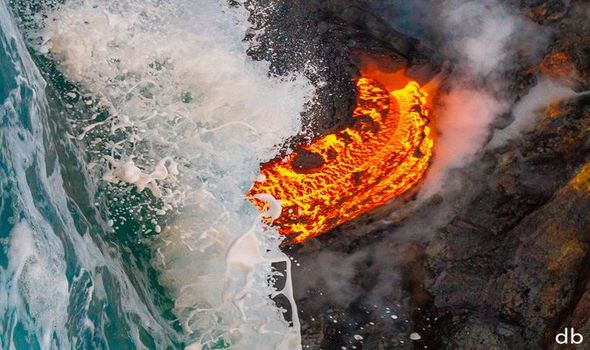 ‘Lava chaser’ Demian Barrios is based in Hawaii and has documented many incredible volcanic moments on the island in his role as a photographer (Instagram:@dbphotogallery). He told Express.co.uk he has been fascinated by volcanoes since he was a small child.

Demian said: “I moved to Hawaii in 1999 and that was the first time that I came and saw the lava here.

“And I was completely drawn to it like a moth to a flame. It has a very destructive power but there’s also a nice eloquent beauty to it.

“There’s just something magical and mesmerising about watching the lava. Witnessing that row power, documenting it and feeling that force, the force that built our planet.”

Demian told Express.co.uk he feels a strong “connection” with volcanos and even had an intuition the La Palma eruption was coming.

He said: “Prior to the eruption I just had this feeling and I woke up one morning and I was just looking at all the earthquakes they were having.

“And I thought to myself, this volcano is gonna go, it’s going to go in the next week, I just know it. And sure enough three days after I’d had that feeling, the eruption started.

“I feel blessed to be in this position and when I get that feeling I just really trust my intuitions.”

Although Demian is an extremely experienced lava chaser, he said it’s still important to “respect” a volcano’s power.

He said: “I’ve had a few accidents over the years and a few close calls. It’s definitely something that needs to be respected.

“You have to respect it and be able to make sure that you’re not in harm’s way. It’s not just the lava itself but the ground could be unstable.

“There’s lava tubes that you could be walking on, they could collapse and you could fall in.

“For beginners, it’s a lot like surfing. If you’re constantly swimming in the ocean it’s not a big deal for you to jump in the water and catch a wave.

“But if you’ve never been in the ocean before, as much as a one metre high wave could drown you if you don’t know what you’re doing.

“It definitely has its dangers but there are also a lot of safe ways to view it. You could use a public viewing platform or go with a guide.”

As an experienced lava chaser, Demian has often been the sole witness of incredible volcanic moments.

He said: “For the last 12 years I’ve had the opportunity to be at the new eruptions in Hawaii within the first few hours.

“I’m the only person that’s been at the last six ocean entries (when the lava hits the ocean) here.

“There was a lot of emotion and I just thought how serendipitous, what perfect timing that I was there at the first moment of the lava hitting the water.

“For the first eruption in 2018, I literally slept in the bushes waiting for the lava to hit the ocean and I was the only person there.”

Demian says: “It’s one thing when the volcano is in an area where no homes or people are really affected.

“But when people start losing their livelihood, it’s an emotional time and I very much respect that, I never want to come across as someone that’s there to take advantage of the situation.”