If you stand on the cliff at Land’s End with your back to the sea and the majesty of England stretching ahead of you, the first thing you see is a theme park. It’s not the most promising introduction to the country. But my friend Ed and I had our sights set well beyond the expensive ice-cream and Arthur’s Quest experience. We had them fixed 874 miles away – on John o’Groats.

Many midlife adventures spark into life in the pub after one too many pints and a chaser of bravado. Ours, however, was a direct reaction to the foreshortened horizons of the pandemic. What better way to shake off the shackles of lockdown than a self-supported, two-week biking and camping trek over the length of the country? “Well …” my wife laughed, “how about staying in a luxury hotel?” She makes a persuasive case, but months of staring at the same four walls had made me yearn for widescreen panoramas and the freedom of the open road.

You can, of course, set off at any time of year, but it makes sense to do the ride when: (a) it’s dry and warm, and (b) the midges are dormant. The best months, therefore, are May and June. So it was far from ideal that we chose September when (a) it was wet and cold, and (b) the midges were in full-on illegal rave mode. 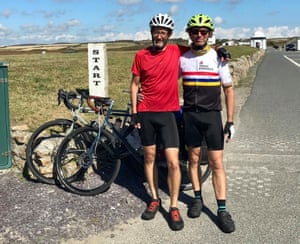 After weeks of preparation (aka, lots of kit faffing and not much training), we boarded the Great Western Railway at Paddington and headed towards Penzance. From there we cycled the dozen or so miles to the tip of the country. There was a long queue of people waiting to have their picture taken at the landmark’s famous fingerpost. We stood as near to it as we could, looking strangely out of place among the daytrippers in our Lycra and helmets, our bikes loaded with camping gear and anything we thought we might need for a fortnight’s trek (our kit list covered two sides of A4). After smiling at the baffled tourists, we heaved on to our bikes and took the first of many thousands of pedal strokes towards the distant north.

The first stage was a short one, a limb loosener along the coast to St Ives, where we camped in the garden of some friends. They fed us and listened to our plans with gratifying awe – before asking if we’d maybe like to borrow two fleece jackets as it was getting cold, and how about some towels, too … Our kit list hadn’t been as exhaustive as we’d thought.

The next morning our adventure began in earnest. To keep ourselves safe from the menace of thundering juggernauts and to see as much of Britain’s glorious countryside as possible, we’d decided to follow a route created by Sustrans. The sustainable transport charity has established an astonishing web of traffic-free routes for walkers and riders since 1977. By following its National Cycle Network trails, we’d be able to cover the long journey on quiet lanes, green paths, gravel trails, rugged tracks and sleepy byways. Sustrans wasn’t wrong when it described the route as the “unforgettable ride of a lifetime” – it was wild and picturesque, but the endless tortuous hills were memorable for all the wrong reasons. 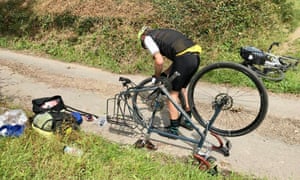 From St Ives we plunged into a landscape dotted with mining ruins and former pump stations. The trail led us along the Wheal Maid valley, before dropping us down into Truro for a picnic lunch of crab and half a loaf of bread. The more we cycled, the more voraciously we ate. After our carb-heavy lunch we picked up the scenic Camel Trail. Built along a disused railway line, it traces Cornwall’s contours – the ups and downs of both its geology and economy.

And so the rhythm of our days was set: we rode and ate and rode and ate. We rolled through secluded valleys and flowering fields, past tiny villages and friendly pubs. It was dizzyingly pretty and would have been more so if the weather gods hadn’t decided to turn on the waterworks. It rained and rained. For days on end we were sodden. We got into the habit of wringing out our socks whenever we stopped for yet another flapjack.

We rode up on to Bodmin, losing ourselves in the rain and mist. We weren’t sure where the moor stopped and the rain clouds began. Bude followed, along with more crab and carbs – and more sock wringing. That afternoon, the sun put in a rare appearance and warmed our backs as we sailed along 30 glorious miles of the Tarka Trail. Fine gravelled and multi-bridged, it flicked back and forth across the slow-flowing rivers of Torridge and Taw. 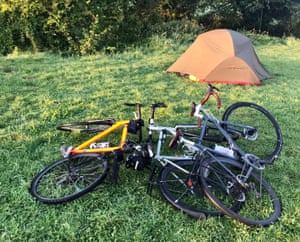 Not all the rhythms we got into were so welcome: my back wheel developed a fondness for getting punctures; both our gear sets frequently jammed; and our bike computer developed a bad case of the yips – randomly adding to the drama by trying to send us back to the beginning.

From Barnstaple we headed to Exmoor and then on to Glastonbury. We followed canal paths and winding rivers. We camped near Wookey Hole, the site boasting only a compost toilet and a river for bathing in. Hardly luxurious, but several beers and a curry made up for it.

Towns swirled past us. At times it felt as if we were on a treadmill with the landscape unspooling seamlessly under us: Tewkesbury, Worcester, Droitwich, Bewdley, Bridgnorth, Ironbridge, Telford, Market Drayton … 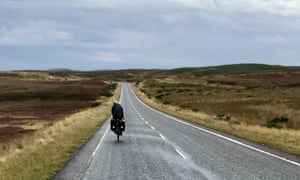 One of the joys of Sustrans is that it recommends a local food and drink to try at each stop. Along the Severn it suggested fidget pie and a pint of Sunbeam; in Manchester it was chicken tikka masala and a pint of Wobbly Bob. Our favourite was in Borwick, where we washed Kendal Mint Cake down with pints of Midlife Crisis.

We camped wherever we could, but sometimes the place (or the weather) made that impossible. We decided not to feel guilty about swapping wild camping for wild hoteling. In Salford we checked into a very cheap hostel. We showered (our first in several days) and went to a nearby pub where the landlord let us order a takeaway to eat under a huge poster of Wayne Rooney. It was one of the weirdest yet most wonderful nights of the trip. Topped only, perhaps, by the night we camped on a lonely beach at Coldbackie on the far north coast of Scotland, with only midges and baby piglets for company.

We knew our route would be traffic-free, but there were days we hardly saw a soul: campsites were empty, cafes and pubs deserted, shops and centres boarded. Riding through the country in the time of Covid gave us a unique perspective. It was quiet and shuttered. At times it seemed as if Britain was a slumbering giant, sleeping through this terrible year. Life was on hold, waiting … 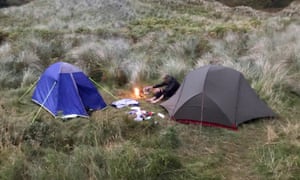 We left the north-west. Sharp hills gave way to distant heaths. We crossed the Ribble and headed towards the towering beauty of the Forest of Bowland. It’s not a forest, maybe it used to be. We stopped at Dunsop, the geographical centre of the UK. We’d done seven days in the saddle and still had seven to go. We pressed on over the Howgills, passing through the stunningly remote Lune valley and passed the Great Asby Scar to Penrith. From there it was a long, flat grind to Gretna. We took a detour to the Lockerbie memorial. A college friend of mine was on that ill-fated PanAm flight in 1988 and was one of the 270 who lost their lives. A large stone in the garden of remembrance now has these words carved into it: “Life is life: enjoy it.”

If we thought Bowland was jaw-dropping, it was a mere appetiser to what Scotland started to send our way. We traversed the Trossachs and skirted Loch Lomond. Cycling past dizzying waterfalls and along the shores of Loch Drunkie and Loch Achray. From Pitlochry, with 1,000 miles under our belts, we moved into the Highlands. We eased through the Cairngorms, the open vistas of Speyside stopping us in our tracks.

From Inverness we crossed the Black Isle and climbed towards Lairg. Now we really were in the remote north. We passed a sign saying: “Fill up, last fuel for 44 miles.” The track meandered across the Flow Country – an endless expanse of blanket bog up to 10m deep that’s part of a vast landscape little changed in 10,000 years. It’s truly wild. We arrived in Tongue. We looked out for dolphins, whales and eagles, but were happy to only see the scarlet streak of a few red squirrels. 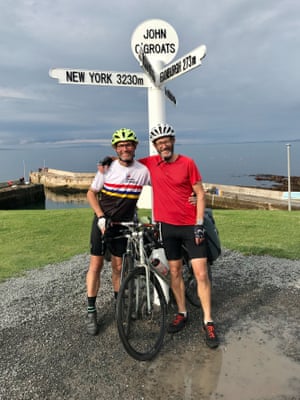 Finally, and at long last, we freewheeled into John o’Groats. Putting on the brakes after 14 days of perpetual motion was almost the hardest thing we had to do. We had our picture taken and basked in the fact that two weeks before we were at the other end of the country. Over our shoulder a ferry chugged towards the Orkneys. Ed looked at me and smiled: “Maybe we could just keep going …”

• The trip took two weeks and during that time Ed and Martin rode 1,300 miles, climbing the height of Everest twice along the way. They ate 28 croissants, 12 curries, 48 energy bars, 36 Tunnock’s Tea Cakes and drank two pints of beer every night. The essential guide to the ride, Land’s End to John o’Groats on the National Cycle Network, costs £14.95 at sustrans.org.uk. It contains details including information on getting to the start and back from the end. GPX files of all 28 stages of the route can also be downloaded from the Sustrans site. The route is actually 1,200 miles, we added a few detours for good measure.

A word about bikes … 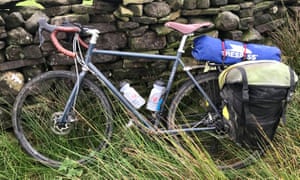 It goes without saying that to ride more than 1,000 miles up the length of the country on rugged tracks and trails while fully loaded with camping gear requires a special bike. Martin and Ed rode Temple Cycles’ Adventure Disc. The steel-framed, drop-handlebar bike blends classic good looks with versatility, reliability and – this is probably the most important part – enormous comfort.

The brand is based in Bristol and in a new shop on London’s Brick Lane. They make a range of bikes, but the Adventure Disc was designed to tackle all surfaces and situations on the same do-it-all bike. I couldn’t fault it, but the one big mistake I made was not fitting mudguards …