If you stand at the tip of Flamborough Head and look to sea, there’s a swathe of water along the Yorkshire coastline called the Flamborough Front. Cold water from the north meets warm water from the south, sparking convulsions of primary productivity. Plankton attract herring and herring attract feeding wildlife – not least, minke whales.

A generation ago there was little anecdotal evidence of cetaceans off the Yorkshire coast, but in recent years minke whales and bottlenose dolphins have been spotted regularly. Whitby Whale Watching was the first boat to start running tourist trips, in 2006, after recognising that minke whales had arrived in the area. Now there are three tour operators and a growing number of private charters – mostly run by diversifying fishermen based in Whitby and Staithes – offering whale-watching and marine wildlife trips. And business is booming. According to the North York Moors national park, wildlife watching has been one of the largest growth areas of visitor interest in 2019 and 2020. Humpback whales also make rare appearances, and there are seals and sea birds, too. 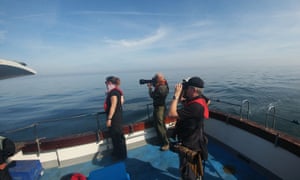 “When we first started running the trips they were popular but never full,” he says. “Then, in the last couple of years we’ve had a lot more bookings. Last year we sold out every trip.”

Baxter invested in another boat last year, allowing Baines to double the number of trips scheduled for 2020. After a shaky start to the season because of lockdown restrictions, he says “everything went like hot cakes”. Whale-watching trips are fully booked until October.

A summer surge in domestic UK tourism has led to a bumper season. Baines says as many as three-quarters of his clients are from Yorkshire or the north of England. “[This year] I suspect a lot of people want to do day trips and then go home because they feel safer doing that,” he says. 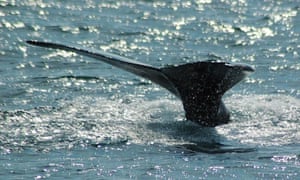 Another ex-fisherman and RNLI helmsman, Martin Hopkinson, who launched his whale-watching and coastal tourism business Three Sisters in Staithes in 2018, says business has increased steadily since he started running trips, but inquiries have been up by a third this year. He attributes this partly to more tourists in general, but also more tourists from the south of England.

“North Yorkshire has become the new Cornwall. At one time, I don’t think people appreciated what a beautiful place it was up here, especially from further south, because they’d never been up here. But now they’re realising that it is a nice part of the world,” he says.

“As far as whales and dolphins and wildlife are concerned, there’s more of them at the right time of year than there ever used to be,” says Hopkinson, who has lived in Staithes for most of his life. Last month, herring shoals came so close to the shore that he says the minke whales could be seen within 500 metres of land.

“On a wildlife coastal trip last weekend we had a pod of bottlenose dolphins that followed us all the way along the coast. It’s difficult to say how many – but maybe 30 to 50 dolphins. Five years ago you probably wouldn’t have seen one.”

Although minke whales have been sighted in Yorkshire waters between August and October for more than a decade, it’s a different story for the bottlenose dolphins. “Two years ago they seemed to turn up and now they’re basically resident,” says Baines. “They’re seen on the Yorkshire coast throughout the year.”

Their arrival has caught the attention of nature conservationists. Recognising how little is known about Yorkshire’s burgeoning marine wildlife, last year the North Sea Wildlife Trusts began to assemble a network of what is now 35 volunteer citizen scientists. Their aim? To record sightings of cetaceans – from Saltburn-by-the-Sea near Redcar to Spurn Point near Hull. In the past 18 months, sightings have increased, but that falls in line with the new drive to record their presence. 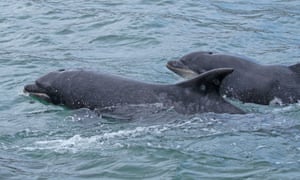 “Although we know they’re coming in to feed, we don’t know exactly why,” says Bex Lynam, marine advocacy officer for the North Sea Wildlife Trusts. Gathering data is the first step towards making a case for marine protection, though at the moment conservationists are unsure what type of protection, if any, might be needed.

“You can’t argue the case for protection when you don’t know what you’ve got, where you’ve got them and when,” says Lynam.

In the UK, cetaceans are protected – insofar as it is illegal to kill, injure or harass them – but that is currently it. Whales have no spatial protection in UK waters and bottlenose dolphins only have it in Moray Firth and Cardigan Bay.

This spring, the North Sea Wildlife Trusts were due to run a free workshop for local boat owners, to raise awareness about the importance of minimising marine wildlife disturbance in the area. It was cancelled due to the pandemic, but has been rescheduled for spring 2021.

“It is disappointing that we don’t have government-accredited schemes [for tour operators], but I guess up until this point it’s not been seen as necessary,” says Lynam. “It’s in everyone’s interest to interact responsibly around wildlife and then we can all keep enjoying it. You’re never going to forget that first glimpse of a whale or a dolphin. It’s a memorable experience and it’s once in a lifetime for some people, so we really encourage that.”