French Polynesia, which encompasses an area of the South Pacific the size of Continental Europe, reopened borders to international visitors on July 15 after one of the most stringent lockdowns anywhere on the globe.

The semi-autonomous territory of France completely halted international and domestic flights after a handful of cases cropped up on Tahiti and sister island Moorea (the rest of the territory, with air links severed, was largely untouched by the virus).

When the U.S. lockdowns hit full effect this spring, I surmised that I would be back to traveling as soon as the restrictions were lifted. I wasn’t wrong. When French Polynesia (where I’ve traveled frequently) reopened, I jumped at the chance to visit, not only because it’s a welcome escape for COVID-19 weariness, but also because I was eager to discover what the country—and international travel at large—looked like in the midst of a pandemic.

The health protocols for visiting French Polynesia today are significant, but not insurmountable. The largest hurdle is the fact that the country requires negative COVID-19 tests within 72 hours of the international flight departure.

The test must be a PCR test (antigen or antibody tests are not reliable enough to be accepted), and the test must be administered and returned within the three-day window. In my state, tests generally aren’t available for low-risk individuals without symptoms (i.e. travelers), but luckily the airline I flew had provided information on testing sites in Southern California that would guarantee turnaround within three days for an expedite fee.

Once the test is complete, travelers fill out the French Polynesian government’s ETIS form via an online portal. The form collects details about traveler’s itineraries (I was visiting several resorts on Bora Bora and one on Tahiti over 19 days), and certifying that they have either purchased travel insurance to cover medical costs or agree to cover the costs themselves should they test positive for COVID-19 while in the country.

Travelers also agree to perform an additional self-test on their fourth day in the country. It’s an easy test consisting of an oral and nasal swab that takes ten minutes to complete including time spent reviewing the printed instructions. It gets dropped off at the resort front desk, and they send it to the local health authority.

There was a small hiccup when I arrived at LAX for my flight to Tahiti. The testing company had inadvertently put the date I made the reservation for testing as the collection date, so my paperwork showed my test had been collected five days prior to the flight (which wasn’t true) instead of the required three. Luckily, a quick e-mail back to them returned corrected paperwork in about an hour, and I was thankful I had taken the carrier’s advice and showed up exactly three hours prior to departure.

The airline provided a packet with sanitizer and several disposable masks for the flight, and mask compliance among the passengers was high. Upon arrival in Tahiti, passengers were asked to remain seated so they could deplane in smaller groups for social distancing.

The only other difference upon arrival was the addition of an ETIS form verification checkpoint just before passport control. A quick scan of the barcode is matched with another scan on the self-test so that the results are linked to individual passengers’ locations during their stay.

Similarly to their U.S. counterparts, hotels throughout French Polynesia have taken steps to protect their guests and employees. Plastic partitions have cropped up on most front desks, concierge stations, and restaurant host and cashier stands. Masks are obligatory while indoors (most hotels will provide them for guests who don’t have them, but anyone who’s made it this far should have a mask), and hotel employees conspicuously remain masked at all times while on duty, both indoors and out.

Hotels have also worked to reduce the amount of paper in guest rooms. Informational circulars, placards, note pads, compendiums, laundry price lists, and anything printed has generally been removed and replaced by QR codes or can be requested from the front desk.

A common greeting at resorts on Bora Bora is the presentation of a flower hei upon arrival. Guests are now shown a stand of hei and can select one to don themselves to maintain social distancing.

Many hotels have also shortened restaurant hours. Multiple restaurant properties have closed some outlets due to slack occupancy, and several of the Bora Bora resorts I stayed at had ongoing renovation work on blocks of overwater bungalows, which was noticeable, but hardly intrusive.

Resort spas mostly remain in operation but shared whirlpool baths, steam rooms and saunas are generally closed. Some spas have also closed locker rooms, so guests change and shower within their treatment rooms.

Still, spas here are pretty impressive. At InterContinental Bora Bora Resort & Thalasso Spa, treatment rooms are situated over a lagoon into which guests peer through glass floors during their treatments. It’s peak relaxation—watching lagoon fish lazily nibble at coral during your massage. 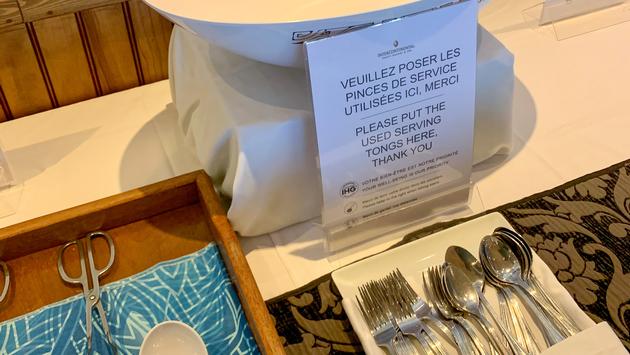 Following a spike in cases in early August, the President of French Polynesia announced during a live television broadcast that additional measures would be undertaken to protect citizens and visitors.

Large gatherings are banned, nightclubs and discos are ordered closed, and guests in restaurants must wear masks when not sitting at their table. Counter service is prohibited without a barrier. Both establishments and patrons are subject to fines if found violating the rules, but a recent police sweep of Papeete and the surrounding area found no violators among restaurant patrons.

There appears to be little disagreement over the requirement to wear masks (the prospect of a fine seems to put the debate over the issue to bed), but I did witness some friction over a restaurant’s refusal to accept personal checks, which many establishments have done since the country’s economic situation has squeezed cash flows, and unlike the U.S. businesses here accept nearly all of the liability for bad checks.

Some restaurants on Tahiti announced closures as soon as the new measures were introduced, and some cited a drop in reservations. However, other restaurants I visited were quite healthily patronized, with lunch and dinner crowds appearing quite ordinary.

Many of the shops catering to tourist clientele appear to be closed, even during regular business hours. I noticed particular clusters of closures on Moorea and Tahiti, mostly in areas dependent of cruise traffic.

For the majority of businesses, however, the only change is the mask requirement and hand sanitizer stations set up a the entrance, plus the ubiquitous plastic partitions. The public market in Papeete still bustles with sales of fresh fruit and seafood, monoi oil, woven bags and hats, and Tahitian pearls.

Once again, masks are the most notable difference. Bookings seemed healthy on the circle island tour of Bora Bora (the concierge had to make several phone calls to secure a spot) and the requirement to wear a mask was the only notable difference.

Of course, there is little objection for visitors who wish to take their masks off briefly for a photo opportunity, but I did notice more than a few who took their photos while masked. Perhaps they did so out of an abundance of caution, or possibly a commemoration of their experience among the intrepid handful of visitors who have ventured so far at a time when global tourism has reached its nadir.

The Islands of Tahiti are still welcoming visitors, and the modifications to service delivery are similar to what one might find elsewhere in the world. Obtaining a COVID-19 test that could be turned around within three days was the biggest obstacle. Once in Tahiti, the welcome was as warm as it’s always been.

The situation remains fluid. There were a handful of cases in French Polynesia when I arrived, and there are more now, and the government has layered in some additional restrictions to dampen community spread. However, numbers are still low, very few cases have required hospitalization, and most data indicates that tourist visitors were not significant sources of new infections.

Running away to the South Seas might seem a lurid fever dream to any traveler any time—even more so during the trying past few months. My advice? Jump through the hoops and visit The Islands of Tahiti—it’s entirely worth it.

For the latest information on entry requirements, visit Tahiti Tourisme.