Home » Travel » Where to get spooked this Halloween in the UK

Paranormal paddling, New Forest
Paddling around New Forest creeks and the Beaulieu River at night sounds evocative enough, but with stories of resident ghosts en route, including a spectral monk and the “Lady in Blue”, canoers will doubtless feel more than a little spooked. Fancy dress is encouraged for the two-hour trip around the private estuary near Lyndhurst in Hampshire, exploring nature-rich waterways and saltmarshes. After disembarking the illuminated canoes, participants will be rewarded with hot chocolate and Halloween sweets.
• £29 adult, £22 child, 26 October-31 October (more dates may be added) newforestactivities.co.uk 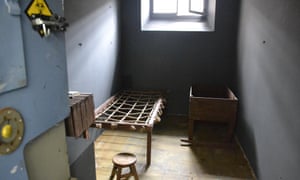 Not for the faint-hearted, overnight ghost hunting with Haunted Happenings takes place in some of the UK’s most atmospheric buildings, from former asylums and mansions to museums and castles. “Experiments” throughout the night include table tipping, glass moving, vigils, séances, experiments and ouija boards. Events run year-round, and for Halloween week venues include decommissioned Shrewsbury prison, the “satanic mills” of Armley near Leeds, and the former underground military complex of Drakelow Tunnels in Kidderminster.
• From £20pp, hauntedhappenings.co.uk 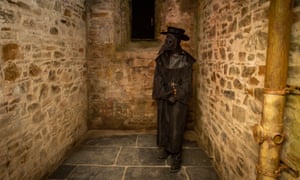 Following an extensive development project, 18th-century Bodmin Jail reopens on 1 October, with ghost tours, scary movies and special all-night Halloween events towards the end of the month. The jail’s own “paranormal manager” will share spiritual and scientific explanations and techniques behind mysterious phenomena. During the daytime, the new immersive Dark Walk experience combines digital technology with the history of the jail and its former inmates plus other dark tales of the region, from highway robbers and smugglers to the Beast of Bodmin Moor. The evening tours are not suitable for children.
• Halloween events from £20 (18+), 26 October-1 November; other evening events from £25 (16+); day entry adult £15, child (5-15) £12.50, Bodminjail.org 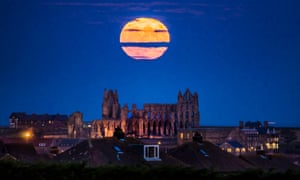 Many of England’s most historic sites have a reputation for ghostly happenings – from the two lovers and a phantom horse at medieval Goodrich castle in Herefordshire, to the nun of Whitby Abbey and the footsteps and laughter at the Cornish castle of Pendennis. Outdoor trails for all ages are on offer at several English Heritage venues for Halloween, including creepy clues along the way and fancy dress competitions. For those brave enough to explore after dark, there’ll also be storytelling performances through the woods at five of the sites for Halloween weekend (29-31 Oct).
• Trails are included in the entry price, which start at £10 adult and £8 child (5-17), advance booking required), 24 October to 1 November, english-heritage.org.uk 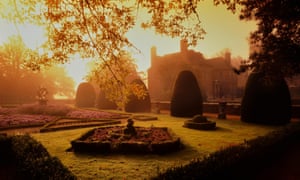 Behind a thick wooden door, around a stream that tumbles down rocks and into a moat, the secret garden of 17th-century manor house Groombridge Place is being transformed into a Halloween grotto. Pumpkins have been secreted away for children to spot before they head off into Crusoe’s World next door. This adventure area includes wooden rope bridges and swings, a giant wooden ship, zipwire, twice-daily bird of prey displays, and walks by the canal and in forest that’s home to fallow deer and “zeedonks” (zebra-donkey hybrids). Treats for anyone in fancy dress.
• Adult £8.95, child £6.95, family (one under-12) £25, 26 October-1 November, groombridgeplace.com 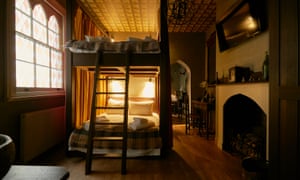 “Lemon cursed” tarts, “eye of newt” scones, “eggspelliarmos” and wild cress “sandwitchs” await wannabe wizards at Georgian House Hotel in London’s Victoria, with the option of bottomless bubbles or magic-themed cocktails. The immersive afternoon tea experience is available Fridays and Saturdays (from £30) and can be upgraded with a weekend break package, including a stay in the Enchanted Chamber – a series of wizard-themed rooms with four posters, velvet bedspreads, stone arches, stained-glass windows and other Harry Potter-esque details plus breakfast (from £199 for two). Magic potion cocktail-making sessions also run alongside, mixing “dragon blood, phoenix teardrop, blue mountain flower and frozen crystals” (£15 alcoholic, £12 mocktails).
• georgianhousehotel.co.uk 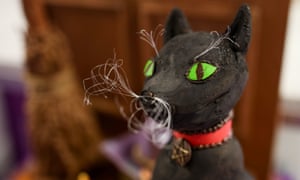 Freddo’s Haunted Mansion is the new attraction for Halloween 2020 at this chocolate theme park, with live entertainment, spooky games and a self-guided mystery trail to help uncover the ghostly inhabitant (17 October-1 November). The Chocolate Making zone is also open, where visitors can see the chocolatiers in action and try their delightful output. This can be followed by piping names in chocolate in the Have a Go Zone as well as a 4D audio-visual rollercoaster experience, which dives into a pot of liquid chocolate. Creepy costumes are encouraged for the daily fancy dress competition; advance booking essential.
• £18 adult, £13.25 child over four , online discounts, cadburyworld.co.uk 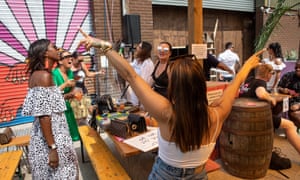 Several special events will be taking place at north London’s open-air venue Costa del Tottenham, part of warehouse-with-a-conscience nightclub the Cause. On 31 October a jungle drum’n’bass barbecue brunch starts at noon, for pre-booked tables of up to six (from £25pp), which includes one hour of bottomless rum cocktails, and music from Randall, Nicky Blackmarket and more. On 1 November, a fancy dress party starts at 4pm, hosted by promoters Raindance and Kapow (from £15pp). The large all-weather space includes table service via an app and a rota of street food traders, from Neapolitan pizza to jerk chicken.
• costadeltottenham.co.uk 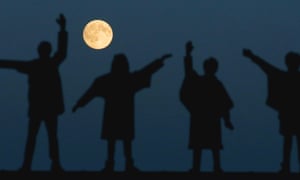 A “blue moon” will illuminate the skies this Halloween. Celebrating the unusual occurrence alongside its fourth birthday, Liverpool Disco Festival heads to warehouse venue Camp and Furnace, in the heart of the city’s Baltic Triangle cultural district, on 31 October. The fancy dress disco will include live house and disco classics from Hope Street Jazz Orchestra and other special guests to be announced, plus prizes for the best-dressed.
• £22/£18pp, pre-book tables of up to six in advance, 3pm-10pm, skiddle.com 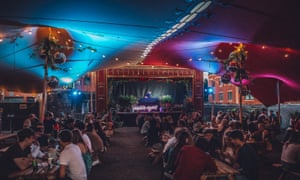 New open-air space Lakota Gardens in Bristol is throwing several Halloween events this year. The space includes pre-bookable large tables, where old-school Italian pizza and aperitivi are served, among other drinks. The Haus of Horrors party, from promoter Fuze and student-run charity Into the Wild, takes place on 29 October (6pm-10pm), including disco, house and tech DJs, live pole and aerial performance, plus fancy dress competitions (from £20 for a table of up to six). Across Halloween weekend (30 and 31 October) the Revenge of the Redlight District party will be hosted by Viva la Disco (30 October) and Wide Eyes Drum & Bass (31 October), transporting revellers from the streets of Stokes Croft to the neon-lit alleyways of Amsterdam, with creepy characters prowling and performing between tables, Shade Cartel dancers and live DJs (from £40 for a table of up to six).
• lakota.co.uk