From a dome bathroom with voice-activated controls to a loo with see-through glass that frosts when in use: The incredible designs making Tokyo the public toilet capital of the world

In Japan – as with many other places – the public toilet has an image problem.

It’s seen as dark, dirty, smelly, and scary. But now, in Tokyo, architects and creative directors have set about designing public loos that people actually want to use as part of ‘The Tokyo Toilet Project’ – and they’ve gone all out to lure people in, creating toilets with beautiful exteriors and hi-tech features.

One bathroom is entirely voice-activated – and looks like a spaceship – while another is shaped like a cartoonish cluster of mushrooms. Two designs, meanwhile, have been fashioned from colourful see-through windows, which turn opaque when the facilities are in use.

‘The Tokyo Toilet Project’ is an ongoing collaboration that began in July 2020 between The Nippon Foundation and the Shibuya City government, with the aim of building 17 bathrooms in the Shibuya area of the Japanese capital.

They aspired to create public bathrooms ‘like you’ve never seen before’, as the project statement explains: ‘Toilets are a symbol of Japan’s world-renowned hospitality culture.’

Scroll down to see 12 of the 17 stunning designs already opened to the public. 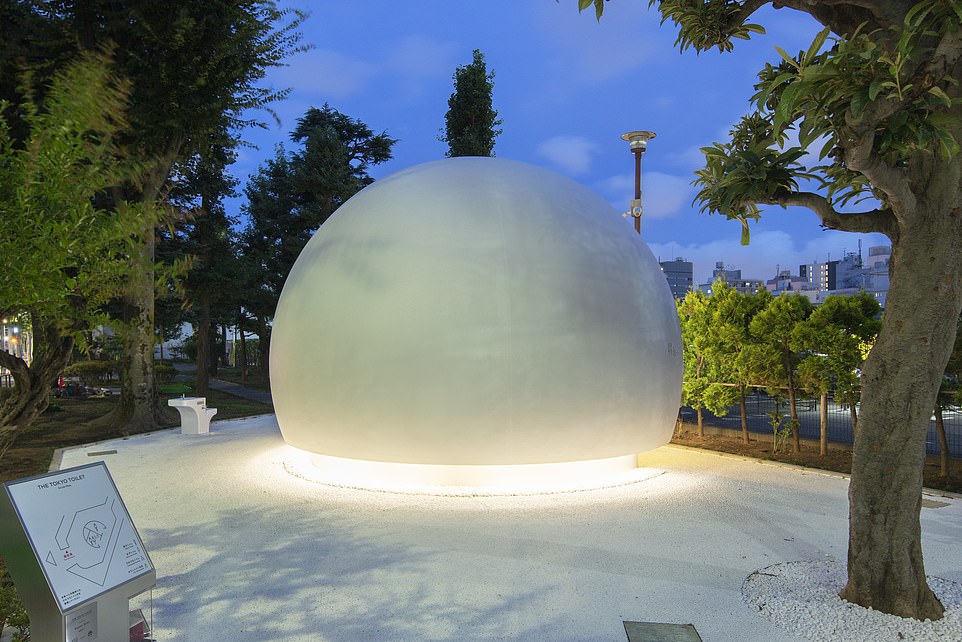 HI TOILET, NANAGO DORI PARK: The functions in this loo are all voice-activated, with its creator, Kazoo Sato, coming up with the concept after researching behaviour in public toilets in Europe and the US and realising people went to great lengths to avoid touching the surfaces inside the bathrooms. The timing of its opening – in the midst of a pandemic – was a coincidence. Sato says: ‘This idea has been in place long before the arrival of Covid-19, but Covid accelerated the acceptance of this unique user experience in terms of “toilets being contactless”’ 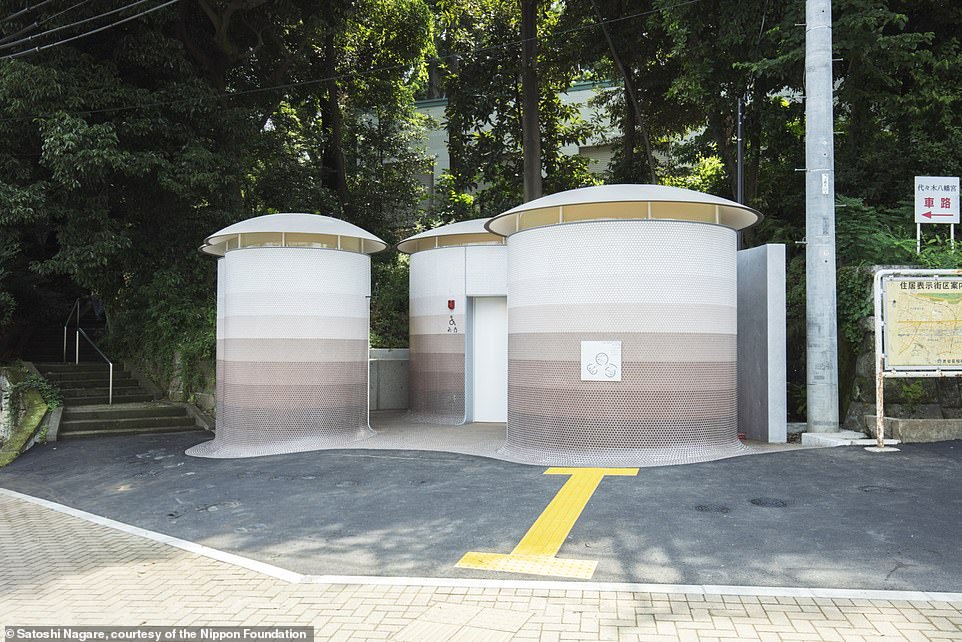 THREE MUSHROOMS, YOYOGI-HACHIMAN: These toilets have been constructed in the wooded area around the Yoyogi-Hachiman shrine. The designer, Toyo Ito, hoped to create the impression that they had ‘sprouted’ from the ground. ‘They are at the foot of a flight of stairs leading up to the shrine, to create the impression of mushrooms that are in harmony with the forest in the background,’ Ito explains 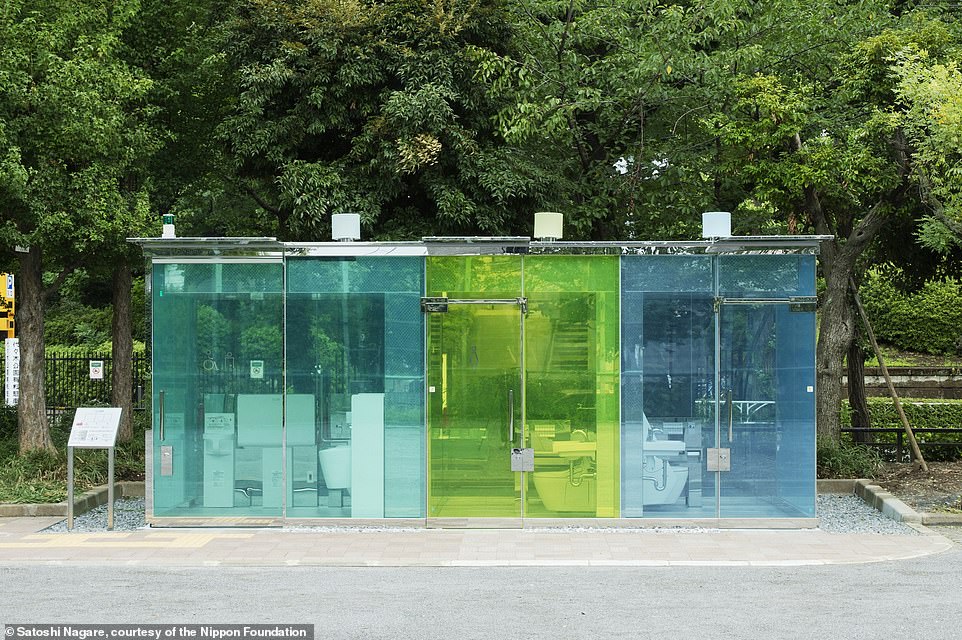 HARU-NO-OGAWA COMMUNITY PARK: A see-through public toilet might seem like a dire prospect to some, but designer Shigeru Ban had good reason to create transparent walls. The Japanese architect points out the glass ‘allows users to check the cleanliness and whether anyone is using the toilet from the outside’. And, the sheer exterior changes once the public toilet is in use. Ban explains: ‘Using the latest technology, the exterior glass turns opaque when locked’ 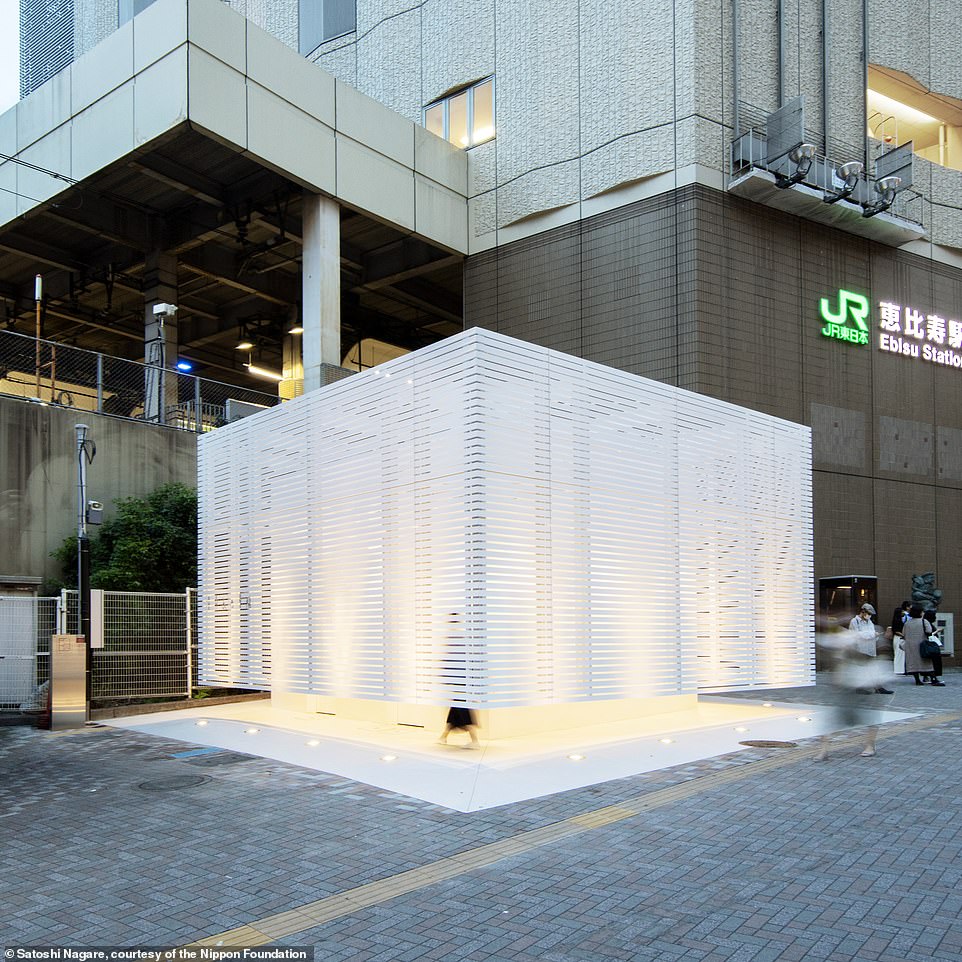 WHITE, EBISU STATION, WEST EXIT: Designer Kashiwa Sato hoped to lift the public’s spirits with his toilet design, creating a ‘clean and safe’ white box outside Tokyo’s Ebisu station. He says: ‘The facility should be easy to enter, easy to use, and have a clean appearance that inspires the passersby to feel a little bit brighter and fresher’ 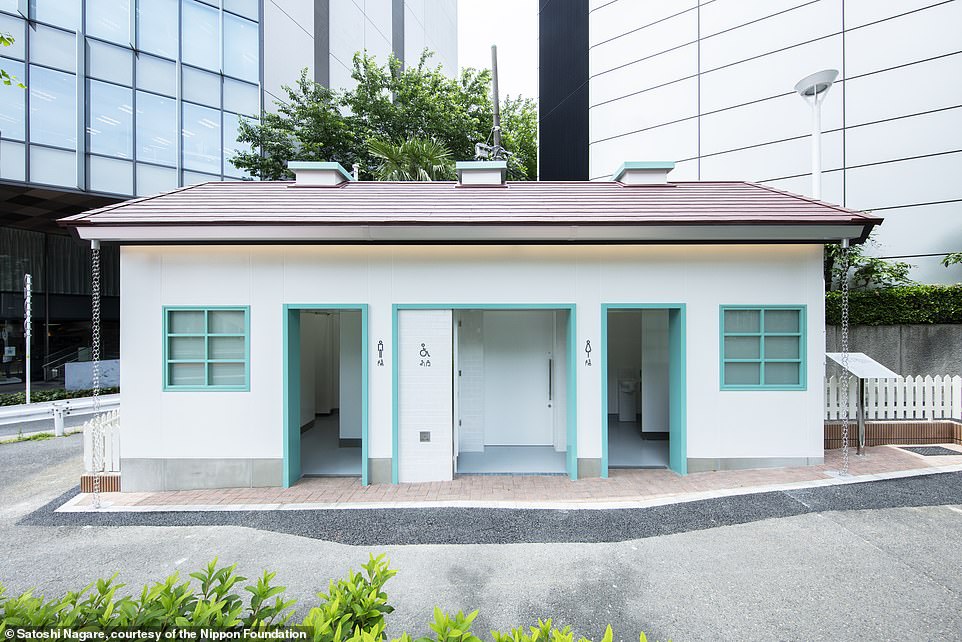 THE HOUSE, JINGUMAE: This public toilet is bound to make its users feel at home. Known as ‘The House,’ fashion designer Nigo modelled the design on traditional homes in the city, creating a sense of cosiness. He says: ‘In contrast to the ever-changing city of Tokyo with its sky-high buildings, I envisioned a toilet that feels like a good old home that stands quietly on a corner of Harajuku. The toilet may feel nostalgic to some and new to others, depending on their age and generation’ 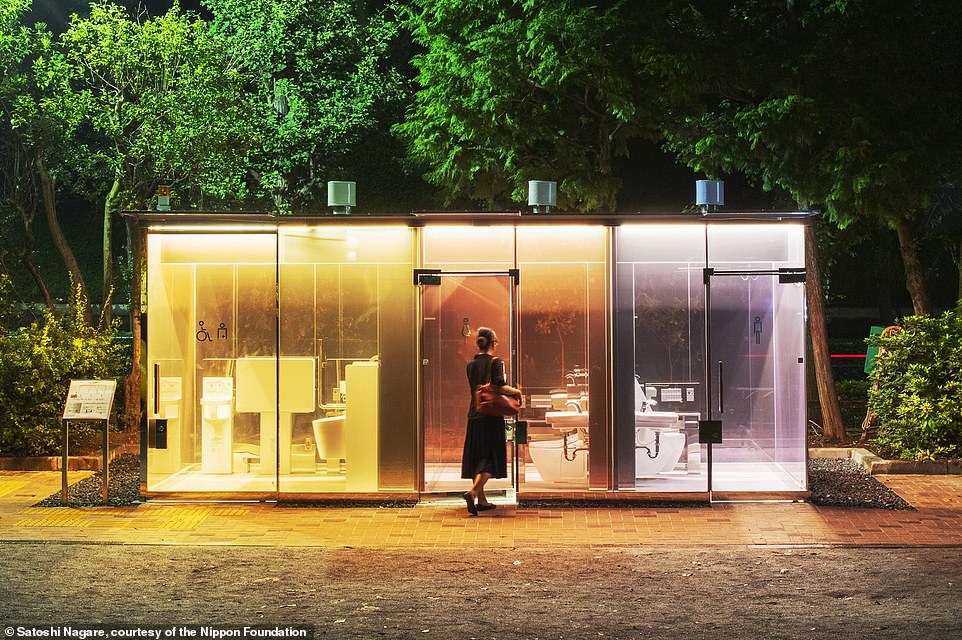 YOYOGI FUKAMACHI MINI PARK: Shigeru Ban created two bathrooms for The Tokyo Toilet Project, recreating his striking see-through design in Yoyogi Fukamachi Mini Park but with differing hues for the glass. ‘At night, the facility lights up the park like a beautiful lantern,’ the designer explains 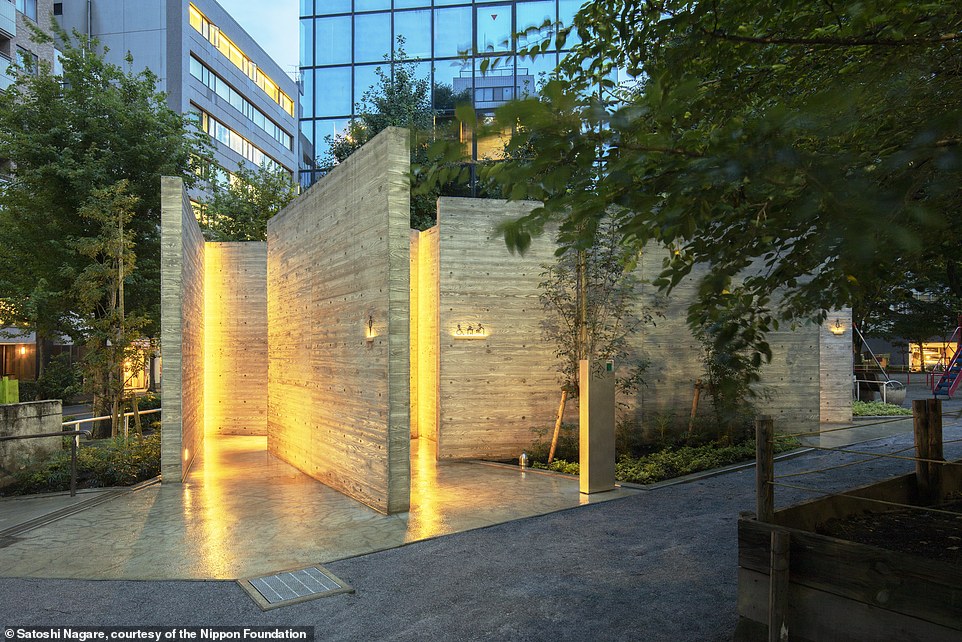 MODERN KAWAYA, EBISU PARK: Masamichi Katayama and interior design firm Wonderwall looked to the history books when it came to designing the ‘Modern Kawaya’ bathroom. In Neolithic times, Japanese ‘kawaya’ toilets were huts of ‘primitive and simple designs, often made of hardened soil or pieces of wood bound together’. Katayama explains: ‘Trying to envision the appearance and atmosphere of the primitive kawaya of the past, we built an “ambiguous space” that is simultaneously an object and a toilet by randomly combining 15 concrete walls’ 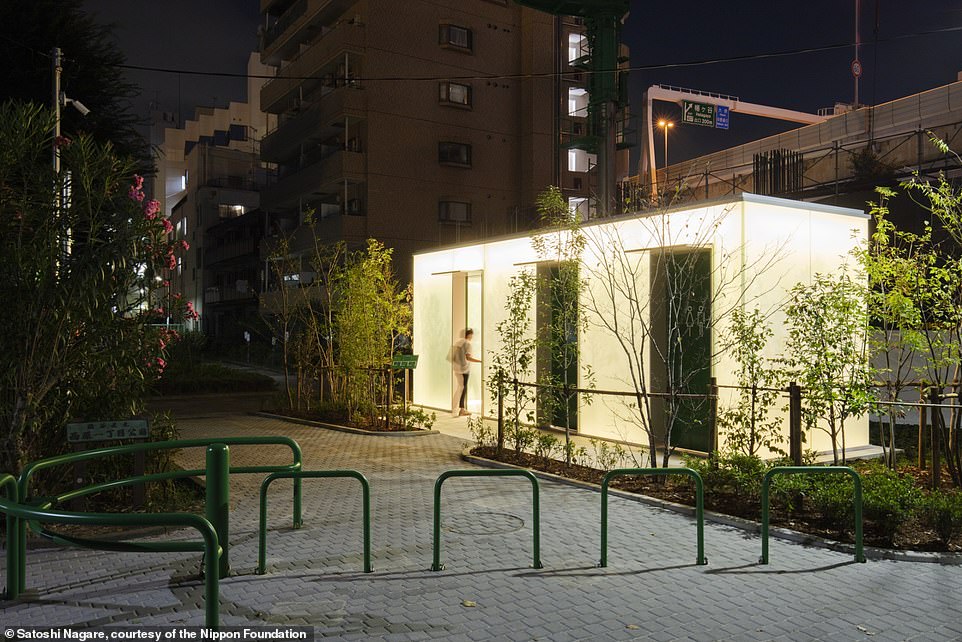 ANDON TOILET, NISHIHARA ITCHOME PARK: By night, the Andon Toilet is aglow in Nishihara Itchome Park, much like an ‘andon’ Japanese paper lantern. ‘The former restroom in Nishihara 1-chome were uninviting and rarely used,’ designer Takenosuke Sakakura observes. He adds: ‘We hope that the restroom will illuminate the park like andon, or lanterns, creating an inviting public space for the visitors’ 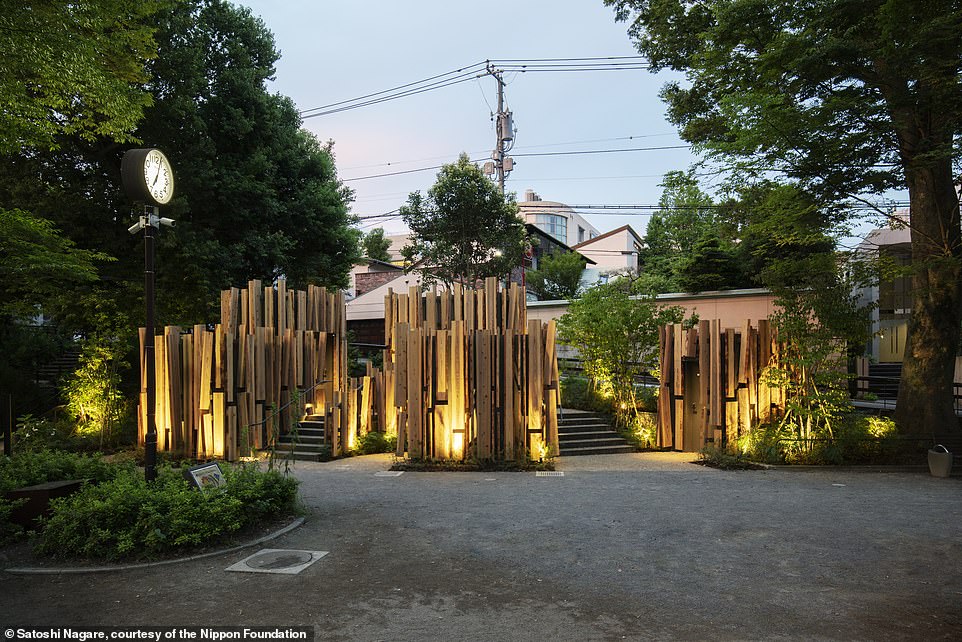 A WALK IN THE WOODS, NABESHIMA SHOTO PARK: The greenery of the surrounding park informed the design when it came to the ‘Walk in the Woods’ toilet. Superstar architect Kengo Kuma, who designed Japan’s National Stadium and the V&A Dundee, imagined a cedar-wood ‘public toilet village’, the huts grouped together on a path through the forest. He reveals: ‘By dividing each section into separate buildings, we created a “public toilet village” that is open, breezy, and easy to pass through, a design appropriate for the post-pandemic times’ 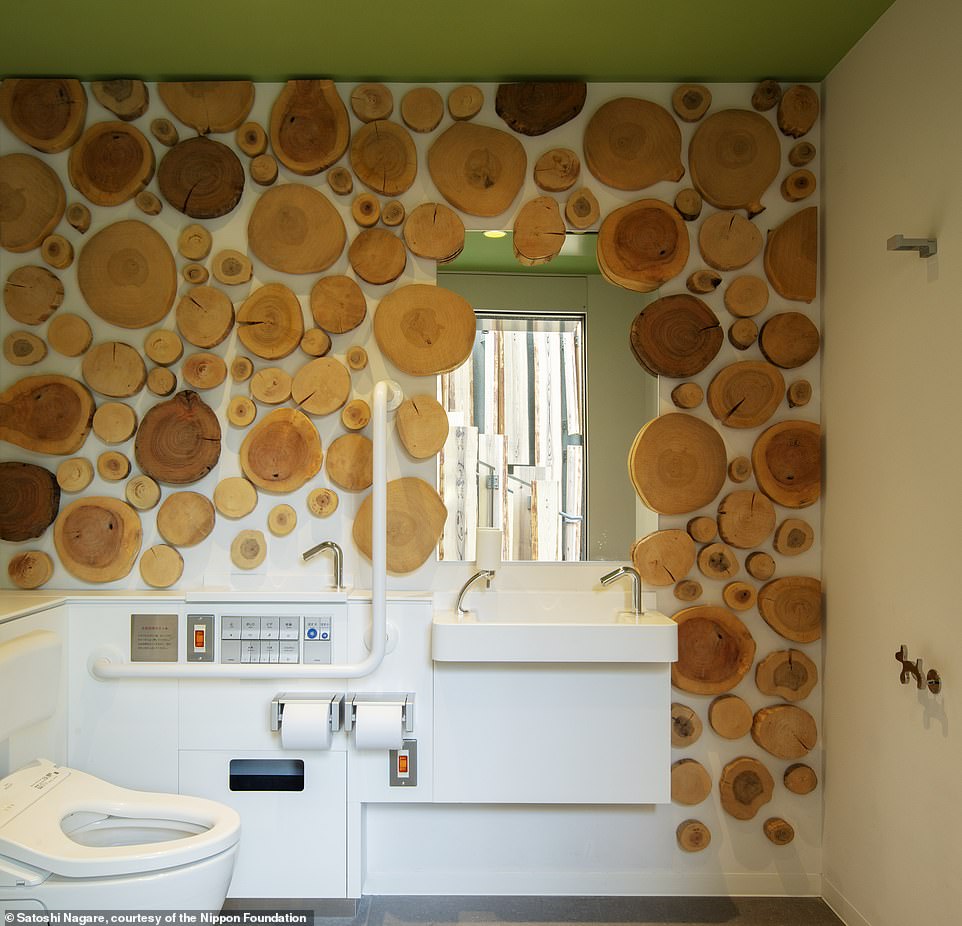 A WALK IN THE WOODS, INTERIOR: The interior design takes its cue from the trees and greenery of Shoto Park. ‘Even in our toilet design, we are entering the age of diversity and a time to go back to the forest,’ says designer Kuma 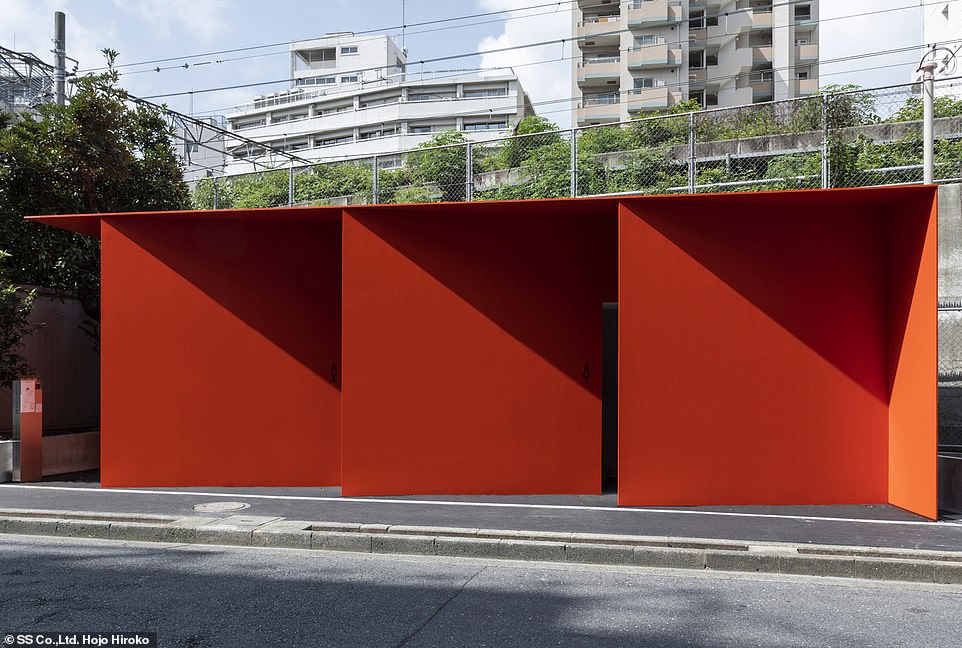 HIGASHI SANCHOME: Safety, privacy and urgency were the three buzzwords behind this sleek red design, created by Nao Tamura. Each cubicle is spacious and secure. ’This design represents my hope for a society where people from all walks of life feel safe and are able to thrive,’ the designer says. The silhouette and colour palette stemmed from Origata, a traditional Japanese method of decorative wrapping 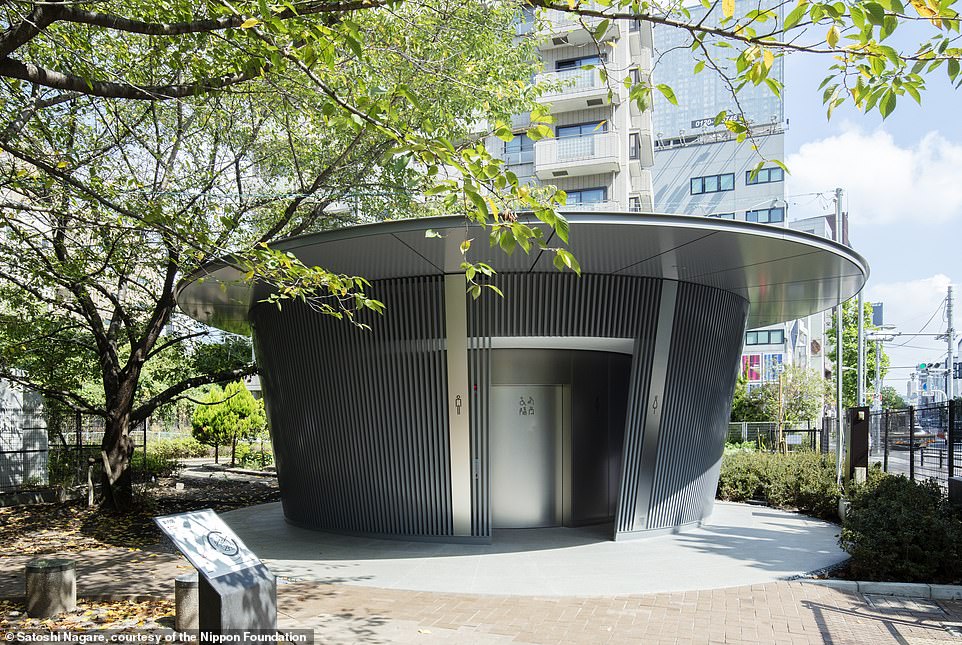 AMAYADORI, JINGU-DORI PARK: ‘I sought for this small architecture to exceed the boundaries of a public toilet to become a “place” in the urban landscape that provides immense public value,’ architect Tadao Ando explains. The slats of the circular walls allow wind and light to pass into the space, and the design is capped by a spanning silver roof. He adds: ‘It was vital for me to make a space that was comfortable and safe’ 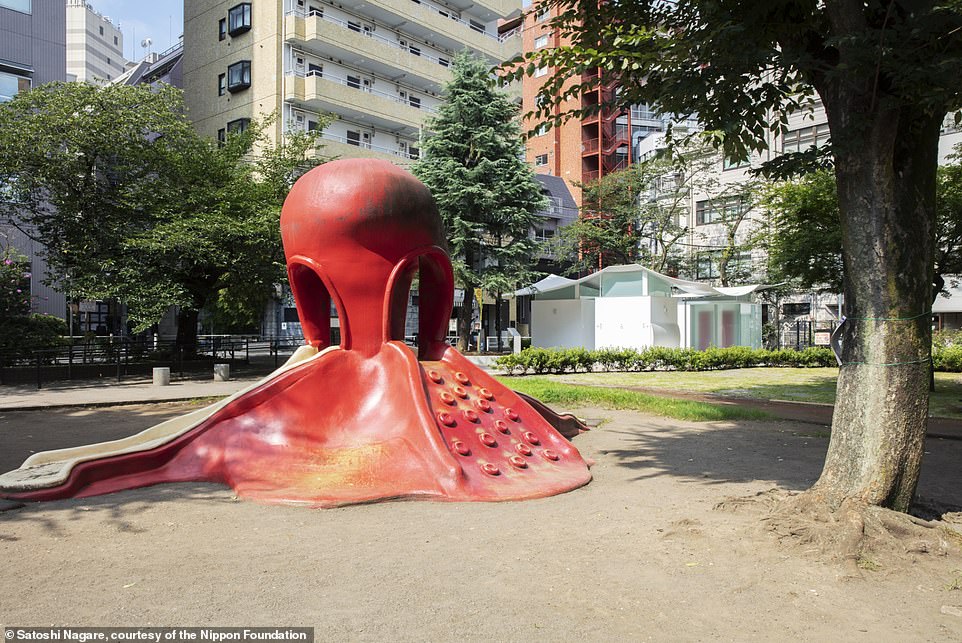 SQUID TOILET, EBISU EAST PARK: Ebisu East Park earned the nickname ‘Octopus park’ thanks to its children’s playground, which is filled with octopus-themed playing equipment. As the name suggests, designer Fumihiko Maki took this into account when it came to his ‘Squid Toilet’ design. He says: ‘The cheerful roof that integrates the different sections promotes ventilation and natural light, creating a bright and clean environment while giving the facility a unique appearance similar to playground equipment’