On Friday, U.S. Senate Committee on Commerce, Science, and Transportation Ranking Member Maria Cantwell of Washington and Senator Rick Scott of Florida introduced a proposal for bipartisan legislation that would require the Transportation Security Administration (TSA) to implement temperature screenings at existing airport checkpoints in order to enhance the safety of passenger air travel amid the COVID-19 pandemic.

The Cantwell-Scott ‘Fly Safe and Healthy Act of 2020’ (S. 4623) would task the TSA with ultimately deploying a uniform temperature-check program across the nation’s airports; but, first, to thoroughly test the technology in various scenarios as part of a pilot program prior to the final rollout.

“As our economy re-opens and Americans begin traveling more, we have to do everything we can to make sure travel is safe,” said Senator Rick Scott. “Since the beginning of the pandemic, I’ve been calling for temperature checks for passengers of mass transit as a common-sense way to help keep Americans safe and healthy.

“We also have to ensure consumers are protected from unfair pricing tactics from airlines,” Scott asserted. “This legislation will enable temperature checks while also ensuring airlines are flexible with customers who get sick following the purchase of a flight. If passengers are not allowed to fly due to a fever, airlines will have to work with the customer to reschedule or cancel the flight at no cost.”

The installation of thermal scanners also stands to help prepare the U.S. for possible future public health risks because fever is a common indicator of many infectious diseases, including COVID-19. Technological tools similar to these have been used to identify and contain the spread of contagious diseases like SARS (severe acute respiratory syndrome) in 2003, the H1N1 (influenza A) pandemic in 2009 and the Ebola outbreak in 2014.

In fact, according to International Air Transport Association (IATA) data, over 140 countries and territories around the world have already implemented temperature screening protocols at airports, including eight of the top ten global aviation markets, with the U.S. and Germany being the only holdouts. 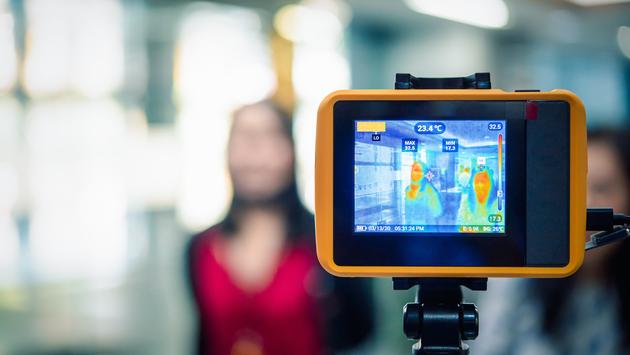 If the legislation is passed, it could play a major role in rebuilding the public’s trust in the aviation system while the pandemic persists. A recent IATA report showed that 80 percent of travelers surveyed said temperature checks would make them feel safer when traveling and those countries that have already implemented thermal screening systems have experienced a relative rebound in air travel. In China and Japan, for instance, scheduled capacity levels are now at 92 percent and 55 percent, respectively, as compared to the start of the year.

U.S. Travel Association Executive Vice President for Public Affairs and Policy Tori Emerson Barnes astutely commented, “While safeguarding health must continue to be the priority, travel ought to be possible with solid protocols in place. This bill’s temperature check pilot program is a prudent step in exploring the framework that will allow travel to more broadly reopen.”